David Hess pitched 6 1/3 no-hit innings and Jonathan Villar and Trey Mancini homered as the Baltimore Orioles hung on for a 6-5 win over the Toronto Blue Jays on Monday.

After 24 scoreless innings by their starters, the Blue Jays ran out of arms and ammo Monday.

Sean Reid-Foley, summoned from Triple-A Buffalo to step in for the injured Clayton Richard, lasted just two innings as the Baltimore Orioles jumped into an early 5-0 lead.

David Hess pitched 6 1/3 no-hit innings and Jonathan Villar and Trey Mancini homered as the Orioles built up a 6-0 lead before the Jays rallied with two runs in the seventh, one in the eight and two in the ninth.

Lourdes Gurriel Jr. struck out to end the comeback in the ninth with Teoscar Hernandez stranded on third as Baltimore hung on for the 6-5 win.

The Orioles (3-1) extended their win streak to three while snapping a 10-game losing streak at Rogers Centre. Toronto (2-3) lost its second in a row.

Randal Grichuk hit a two-run homer and Freddy Galvis had a solo shot for Toronto after Hess exited following a near-flawless 82-pitch performance that included 50 strikes.

Down 6-3 in the ninth, the Jays put men on second and third with one out. Pinch-hitter Kevin Pillar's sacrifice fly made it 6-4 and Hernandez's triple made it 6-5.

Bleier got the save.

WATCH | Orioles hold on for win over Toronto: 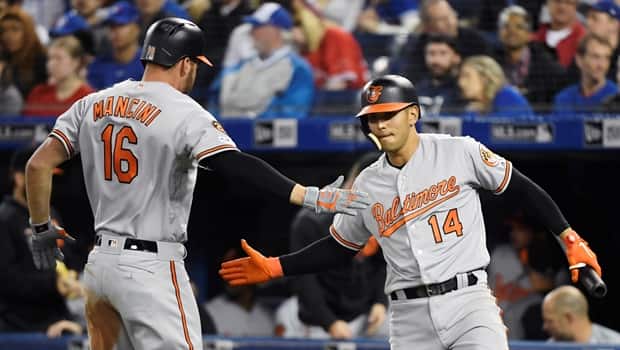 Orioles hold on for win over Blue Jays

Just 10,460 fans took in the game at the Rogers Centre, the lowest attendance of the young season. Opening Day drew 45,048.

After four strong starts, the Toronto pitching faltered and the Jays trailed 4-0 after the first and 5-0 after the second as Reid-Foley (0-1) struggled.

In contrast, Hess (1-0) retired 19 of 20 Jays in his 20th career start. He dispatched the first nine Jays he faced, a streak that ended with a Billy McKinney walk to open the fourth. It marked the fourth time in five games that Toronto failed to get a runner on base in the first three innings.

The 25-year-old Hess, a fifth-round pick of the Orioles in the 2014 draft, exited with one out in the seventh after Drury lined out hard to shortstop Richie Martin. Hess, who went 3-10 with a 4.88 earned-run average as a rookie last season, allowed just one walk while striking out a career-high eight.

Oriles manager Brandon Hyde said he took Hess out because he was on a pitch count given he had thrown 42 pitches in a two-inning outing on Opening Day. Still Hyde called the walk out to the mound "terrible."

"I hated to do it, but for David's health and one of, hopefully 30-plus starts, it was the right thing to do," he said.

Hess said he understood his manager was "trying to keep health the primary thing."

Hess was replaced by Araujo, who gave up a walk and saw the no-hitter disappear when Grichuk hammered a shot over the left-field fence.

Toronto's Marcus Stroman, Aaron Sanchez, Matt Shoemaker and Trent Thornton had combined for 24 scoreless innings in the first four games of the season against visiting Detroit.

But that streak ended with a four-run Baltimore first inning that saw the Orioles send nine men to the plate and Reid-Foley throw 34 pitches.

Villar got things going with a two-run homer with one out. After Mancini singled, the Jays had a chance to end the inning on a double play on Rio Ruiz' infield grounder. But Galvis could not hang onto the throw at second.

A Renato Nunez walk loaded the bases and got the Jays bullpen working. Reid-Foley walked Chris Davis to score another run before a wild pitch scored Ruiz to make made it 4-0.

Cedric Mullins was hit by a pitch to open the second and eventually scored on Mancini's sacrifice fly to increase the lead to five.

"Just come in tomorrow and get better," Reid-Foley said after the game.

Pannone stemmed the flow of runs with four innings of scoreless relief. He ended his one-hit, five-strikeout stint with a marathon Mullins strikeout that required 12 pitches to complete.

Toronto reliever Sam Gaviglio took over in the seventh, giving up a solo 408-foot homer to Mancini in the seventh. Wright yielded the Galvis homer in the eighth.

Stroman is expected to start Tuesday for Toronto against Andrew Cashner.