Toronto Raptors all-star Kyle Lowry watched from the front row, in his Marcus Stroman jersey, as the Blue Jays roared past Texas on Sunday and into the American League Championship Series.

Toronto Raptors all-star Kyle Lowry watched from the front row, in his Marcus Stroman jersey, as the Blue Jays roared past Texas on Sunday and into the American League Championship Series.

The Raptors are no casual fans of their Toronto baseball "brothers," and coach Dwane Casey applauds his players' support of the Jays' thrilling playoff run.

"Winning is contagious and I said this the other night at our team dinner," Casey said. "It's great for us to experience the Blue Jays winning, for the guys to go to the games and feel the passion that the fans have, and winning. There's a pride in that.

"I feel it for the Blue Jays. The players feel it and hopefully [the Jays] felt it for us. Anything we can do to be a part of that, to go see it, to watch it, to have something to pull for, it's great for us, it's great for the city."

The Raptors practised at the BioSteel Centre in Toronto on Wednesday, and much of the post-practice talk was about baseball. The Jays next face Cleveland, the city that dispatched the Raptors in the playoffs. According to ESPN SportsCenter, it's the first time the same two cities have faced off in the semifinals of the MLB and NBA playoffs in the same year.

The Raptors and Jays, who play a couple of blocks from each other in downtown Toronto, have become tight. When the Raptors' historic playoff run took them all the way to an Eastern Conference final date with the Cavaliers last spring, the Jays were in attendance. The Raptors have responded in kind.

"It's crazy, man," said forward DeMarre Carroll. "Just to see how the city gets behind their team, we feel like the Blue Jays are kind of like our brothers, we want them to go as far or further than we went. We have to stick together and I feel like: one team, one country. That's the motto we have to take and the Blue Jays are doing real good now and hopefully it doesn't stop there and they can win a World Series."

Carroll grew up playing baseball. He made reporters guess his position — catcher.

"Come on, now. Junk Yard Dog," he said, laughing. "I like the rugged, I like to be in there getting hit by a bat or a baseball, being in every play. Throwing it to second, the guy sliding into you, that's the kind of stuff I like. I feed off that.

"I was kind of short growing up and then I hit this growth spurt and my knees started bothering me so I couldn't play [baseball] no more."

There's an organic connection between American athletes playing in a Canadian city, said star guard DeMar DeRozan. It's also natural for athletes to cheer for each other.

"In some way, shape or form all athletes aspire to be other athletes," he said. "It makes you automatically fans of it. Think about, if you're playing around, if we've got a baseball out back, we go out there and say we're trying to be Barry Bonds or something. Whoever it may be, we try to make a comparison. I'm pretty sure other sports do the same. They pick up a basketball, go in the gym, and think they're a professional basketball player."

The Jays have also given the Raptors a welcome reprieve during the grind of training camp and the pre-season.

"Sometimes you want to get out of your element of being so caught up, and stressed over your own job, you want to be able to cheer on somebody else's profession, in your own city, and watch them perform instead of you worrying about the preparation, you going against your own opponent," DeRozan said. "Now we get to sit back, relax and enjoy."

LeBron James has voiced his support of the Indians, going so far as offering a pre-game speech to the team and crowd before Game 2 of the ALDS, and he's excited that the Blue Jays and Indians are replicating the matchup between the Raptors and Cavaliers earlier in the year.

James hopes to be in attendance for Game 2 of the ALCS which goes Saturday. 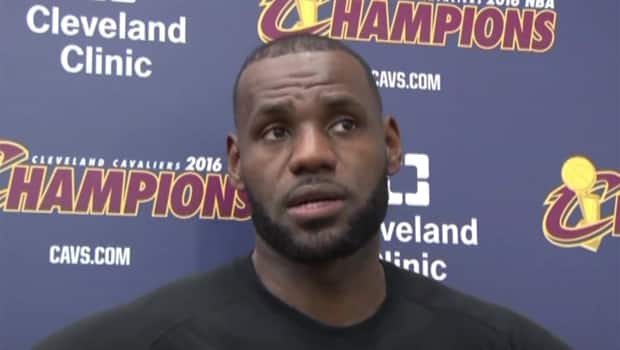 Cleveland faces Toronto 'back to back'

4 years ago
0:15
Cavaliers' star LeBron James is supporting the Cleveland Indians as they get ready to take on the Toronto Blue Jays in the ALCS . 0:15

The Raptors are in Cleveland to take on James and the Cavs in exhibition action Thursday, then host Argentine team San Lorenzo de Almagro on Friday in their only pre-season game at the Air Canada Centre.

The Jays open their best-of-seven ALCS on Friday in Cleveland.