Starter Aaron Sanchez and the Toronto Blue Jays experienced a reversal of fortune on Sunday when the Tampa Bay Rays overcame a seven-run disadvantage to score a 10-9 win.

A day after the Blue Jays overcame a 9-2 deficit to win 10-9 in the 12th inning on a Teoscar Hernandez walk-off homer, Sanchez was on the verge of ending his three-month-long winless streak only to watch Toronto cough up its own lead.

He departed with an 8-3 lead after 95 pitches — 67 for strikes — and 10 strikeouts in a walk-less 5 2/3 innings. He started the game with a club-record six straight strikeouts and allowed only a Ji-Man Choi single in the first 13 batters he faced.

"I wasn't aware (the six straight strikeouts were a record), but someone told me after the game," said Sanchez, whose 10 strikeouts were one shy of his career-best. "It's cool. But I wish we would have got the win there. All that stuff doesn't really matter unless you win." 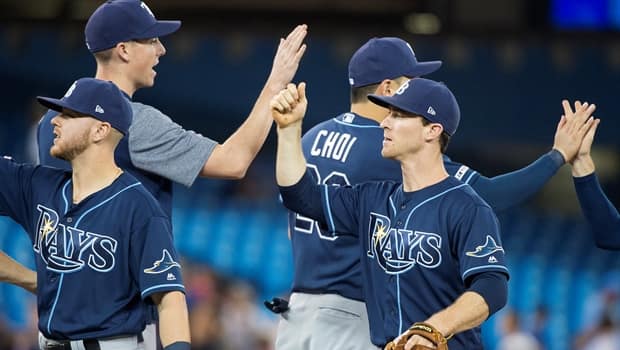 1 year agoVideo
2:10
The Toronto Blue Jays blew a seven run lead just a day after a massive comeback of their own to lose 10-9 to the Tampa Bay Rays. 2:10

Sanchez (3-14) has not won since Toronto defeated the Oakland A's 7-1 at home on April 27. The righty failed to win his next 16 starts, which included 13 losses and three no-decisions. He had lost 10 in a row before his impressive no-decision shutout outing against Cleveland last Tuesday.

Sanchez left Rays catcher Travis d'Arnaud on second base after he smacked a two-run with a double. Blue Jays reliever Justin Shafer yielded Nate Lowe single to centre field to score d'Arnaud and make it 8-4.

But Toronto pushed another run across in the bottom of the inning when Vladimir Guerrero Jr. singled to right field to knock in his third RBI of the game.

But as good as the Toronto relievers were on Saturday when they combined to no-hit the Rays in the final six innings of the game, Shafer, Joe Biagini and David Phelps floundered.

Biagini surrendered a two-run shot to Choi in the seventh inning. Guillermo Heredia smashed a two-run blast, and Willy Adames made it back-to-back blasts with a solo shot off Phelps in the eighth to tie the game.

That set the stage to score the go-ahead run in the ninth. Toronto reliever Daniel Hudson loaded the bases with two walks and a single to Austin Meadows.

Hudson gave way to Derek Law. The first batter he faced, Joey Wendle, hit a chopper to second base to score the decisive run.

Amidst the wild game, the Blue Jays traded veteran utility Eric Sogard to the Rays before reportedly shipping Marcus Stroman to the New York Mets. The trades could open a roster spot for minor-league infielder Bo Bichette to join the team for the Blue Jays series in Kansas City.

Sogard found out 15 minutes before the game he was being replaced in right field. But the trade for two players to be named later will not be finalized until after a medical.

"It was definitely an interesting scenario," he said. "I was sitting there thinking what team I should be cheering for. These last two games were absolutely wild.

"It would have been neat starting the game with the Blue Jays and then finishing it them."

After he found out about the trade, he retired to the Blue Jays clubhouse to pack his belongings and say his goodbyes to teammates and staff.

Sogard, 33, proved to be not only a capable leadoff hitter but a positive influence on young Blue Jays. He made the most of his time in Toronto after he was signed in the offseason to a minor-league contract.

"Ever since this guy stepped in that first day of spring training he gave us a veteran presence," Sanchez said. "He's been on winning teams. He came in here, and everybody knew we were young, he came in here to play a hard nine."

Sogard remained back in Toronto on Sunday evening and will join his new teammates in time for their series opener in Boston against the Red Sox on Tuesday.