Major league teams have released hundreds of young players with the minor league season in doubt due to the coronavirus pandemic. Over 200 players were cut Friday and more than 400 reportedly have been released over the past month.

Major league teams have released hundreds of young players with the minor league season in doubt due to the coronavirus pandemic.

Over 200 players were cut Friday and more than 400 have been released over the past month according to transactions posted at MiLB.com.

The start of the minor league season was postponed in March and players were mostly sent home from spring training. While Major League Baseball and the players' association are negotiating terms to play big league ball this summer, it's unlikely there will be minor league games.

Minor league players not on 40-man rosters were promised $400 US per week through May 31 by a policy drafted by MLB. At least 15 teams have promised to extend those allowances through at least June, with Oakland the only club known to be ending its stipends at the end of May. 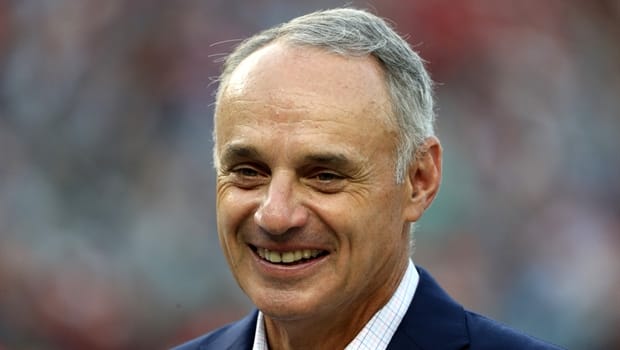 MLB Commissioner: 'Great confidence' they will reach agreement with MLBPA

The Chicago White Sox were among the clubs to make cuts, but they will continue to pay $400 per week to the 25 players released last week.

Kansas City general manager Dayton Moore said the Royals will not release any minor leaguers amid the pandemic and will continue providing the $400 per week allowances.

"The minor-league player, the players that you'll never know about, the players that never get out of rookie ball or High-A, those players have as much impact on the growth of our game as 10-year, 15-year veteran players," Moore said.

"They have as much opportunity to influence the growth of our game as those individuals that play for a long time because those are the individuals that go back into their communities and teach the game. They work in academies. They're junior college coaches.

They're college coaches. They're scouts. They coach in professional baseball. They're growing the game constantly because they're so passionate about it."

Lower-level players were hit hardest by cuts, with at least 172 players released from the rookie-level Gulf Coast, Arizona and Dominican Summer Leagues.

It's not unusual for big league teams to release minor leaguers at this time of year. Cuts are routine ahead of the June draft as franchises make space for newly acquired players, and teams also kept more players than usual after spring training this season. It's unclear if more minor league players are being released this season than normal.

Baseball will hold its amateur draft June 10, but MLB has shortened the draft from 40 rounds to five.