Toronto Blue Jays infielder Bo Bichette extended his hitting streak to start a Major League career to a franchise-record 11 games with a home run in the fifth inning. He hit a double in the sixth inning, which extended his doubles streak to a major-league record nine consecutive games.

Coming into Thursday's game with a franchise-record 10-game hitting streak to start his career, Toronto Blue Jays rookie Bo Bichette put on quite the show in his first game at home.

Gio Urshela hit a pair of home runs as the New York Yankees extended their winning streak to a season-high nine games as they defeated the Blue Jays 12-6. 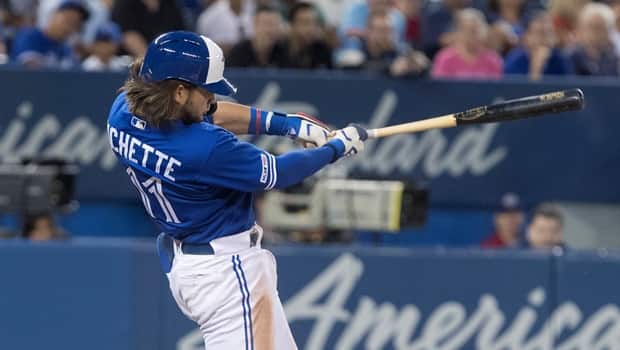 Although the win is significant for New York (76-39) who have championship aspirations this season, the loss doesn't have the same negative feelings for Toronto as others from earlier in the year.

With playoff hopes for 2019 all but dashed, the draw for Toronto is the future. Performances like Bichette's provide some hope.

"I've been saying it since the beginning of the season that once all of these kids get together, it's going to be fun to watch," Montoyo said.

Yankees pitcher Domingo German collected the win (15-2), despite a rough performance in which he allowed three earn-runs on eight hits and two home runs.

Luis Cessa collected the save (1) after pitching the final three innings of the game.

Thomas Pannone (2-5) struggled in his very first start at home this season. The Blue Jays pitcher gave up seven runs on six hits, two home runs and struck out one batter.

The Yankees opened the scoring in the first inning. DJ LeMahieu opened the game with a hard-hit double to centre field. Two batters later, Urshela recorded his first homer of the game when he jumped on an 0-2 fastball from Pannone which gave New York a 2-0 lead.

Struggles on the mound

In the third inning, the Yankees would get to Pannone once again. After allowing the first two batters on, Pannone let Breyvic Valera reach home on a wild pitch delivered to Urshela. On the next throw, Urshela hit his second homer of the game, another two-run shot, which gave New York a 5-0 advantage.

Didi Gregorious hit a single on the next at-bat, which prompted Toronto to warm up the bullpen. Cameron Maybin drove in Gregorious with an RBI-single which made it 6-0 Yankees — which spelled the end of Pannone's night.

Zack Godley, activated earlier in the day to the team's active roster, didn't fare much better. Mike Tauchman hit a two-run homer off Godley which gave the Yankees an 8-0 lead.

Toronto got on the board in the fifth.

Fisher lead off with a solo home run which cut New York's lead to 8-1. After, McGuire followed up with a double and Bichette hit a home run to left field which made it 8-3 Yankees.

"When I hit the homer, that was the first chills moment I've had in the big leagues so far," Bichette said. "That was a pretty cool moment."

Gurriel Jr. left the game after recording a single in the ninth inning after he appeared to grab his leg before he reached first base.

"He should be fine, it wasn't his knee," Montoyo said of Gurriel's injury. "He had a cramp, but he didn't pull anything, so it looks like he's going to be ok."

In the sixth inning, LeMahieu hit a two-run single which made it 10-4 Yankees.

Later in the inning, Bichette hit an RBI double. The hit set the major league record for his ninth consecutive game in which he recorded a double.