Although the weather on the West Coast has a major impact on an outfielder's strategy, Toronto's Rogers Centre presents its own test in tracking fly balls, something former Blue Jays teammates Kevin Pillar and Randal Grichuk know all too well.

Former Blue Jays outfielder Kevin Pillar made his first return to Rogers Centre on Tuesday night after being traded to the San Francisco Giants on April 2.

During his time in Toronto, the centre-fielder became a fan favourite for his highlight-reel catches.

WATCH | Kevin Pillar makes one of his many spectacular catches: 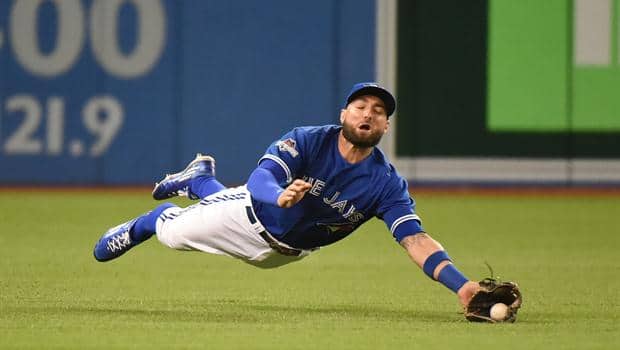 5 years ago
0:58
The Blue Jays center fielder makes another hi-light reel catch, this time he takes a hit away from the Rangers slugger 0:58

Now, the 30-year-old is making those catches in San Francisco. But playing the outfield on the West Coast with the marine layer effect has its challenges, according to a 2017 study done by Alan Nathan, a baseball columnist for the Hardball Times and a member of scientific panels.

According to the study, four of the six ballparks on the West Coast were below average in fly ball distance. With the ball not travelling as far, Pillar has had to adjust the way he plays the position, along with familiarizing himself with new coaches and teammates.

"I mean, it is always a challenge. The bigger adjustment was playing in a different league. Facing pitchers and players that I very seldomly got a chance to play against," said Pillar. "I am kind of learning these pitchers and learning how to position myself defensively against hitters that I have never really played against before.

"I have tried to rely on my teammates a lot and try to rely on watching video a whole lot. I've tried to rely on our coaching staff as far as positioning. I have a whole new pitching staff I have to learn and obviously I have a much bigger outfield in San Francisco then I did here. So positioning is something that is going to be very important for me to try to get to know my pitching staff and my opponents as quickly as possible so that is something I am working on every day."

While Pillar has only played a few weeks in San Francisco, Blue Jays right-fielder Randal Grichuk spent plenty of innings patrolling the outfield in San Francisco, San Diego and Los Angeles while a member of the St. Louis Cardinals for four seasons. He said outfielders often need to move in more because the ball doesn't travel as far on windy days.

"[The wind] knocks [the ball] down a little bit," Grichuk explained to CBC Sports. "You might get some places like Oakland where it is a day game on a high sky where it makes it more difficult. But you prepare the same way no matter where you play."

Rogers Centre has its own challenges

Although the weather on the West Coast has a major impact on an outfielder's strategy, Rogers Centre presents its own challenges in tracking fly balls.

"Some people say it may fly a little more depending on whether or not [the dome] is closed or open. I play it the same way," Grichuk said. "If in BP [batting practice] you see it carrying a little bit, you may take a couple of steps back. For the most part, I play it the same."

Another factor in playing the outfield is the difference between playing on grass or turf. Now that Pillar is in San Francisco, which is a grass field, he can be even more aggressive than when he was playing in Toronto, which plays its games on turf.

"It is refreshing to be playing on grass finally. Over the long haul, I think it's going to do my body some good," Pillar said. "I guess you can tend to be a little more aggressive on grass especially with higher pop flies, knowing when it hits the grass it isn't going to kick away or bounce anywhere. Here [in Toronto] you had to make a decision right off the bat if you were going to be a little more conservative or a little more aggressive. Maybe kind of deal with what happens after the fact."

As for Grichuk, the 27-year-old would rather play on the Rogers Centre turf, where the bounces are more natural.

"I mean, honestly, I like playing on the turf in the aspect of you get true hops," Grichuk said. "Obviously, based on some locations the grass is different, they cut it differently. Here, you get a true hop and obviously the bounce in the turf, you will learn to see they might bounce higher or stay a little closer to the ground. When it comes to true ground balls, the turf you get a true grounder so it is pretty easy."