Outfielder Kevin Pillar, whom the Blue Jays have suspended two games, took to Twitter earlier Thursday to apologize to the Atlanta Braves, their fans and LGBTQ community for his "lack of respect" for using what's been interpreted as a homophobic slur during Wednesday night's game.

Toronto centre-fielder apologizes to LGBT community, willing to be made an example 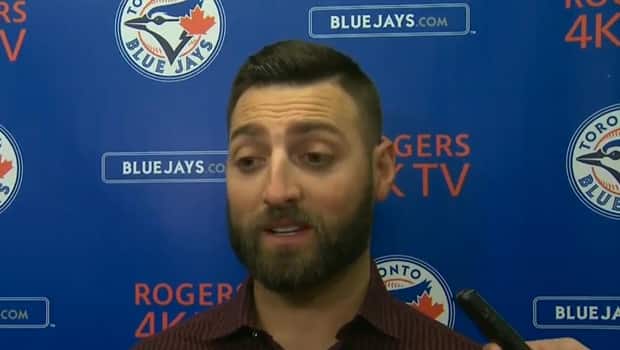 Kevin Pillar apologizes for slur: 'I look forward to making it right.'

4 years ago
1:56
Pillar was suspended 2 games for uttering a homophobic slur in Wednesday's 8-4 loss in Atlanta. He spoke to the media on Thursday and issued an apology. 1:56

Kevin Pillar has been suspended for two games for shouting an anti-gay slur at an Atlanta Braves pitcher, an incident the Toronto Blue Jays centre-fielder says he deeply regrets but hopes will ultimately raise awareness about the hurtful impact words can have.

Pillar was angry at Jason Motte for allegedly quick-pitching him to get a strikeout that ended the seventh inning in Atlanta's 8-4 victory Wednesday night.

Replays appeared to show Pillar using the slur as he yelled toward the mound.

Pillar told reporters in Atlanta there is "no place for this language" anywhere, including on the baseball field.

<a href="https://twitter.com/KPILLAR4">@KPILLAR4</a> Thank you. As a gay man I accept your apology &amp; I also know that what came out of your mouth didn't stem from Hatred. I know the difference

"I really felt embarrassed for myself, for my family for this organization," Pillar said, adding that he had not slept much Wednesday night. "I was ashamed."

The incident occurred during the Blue Jays' third straight loss to the Braves. With his team trailing 8-3, Pillar struck out swinging to end a 1-2-3 seventh. He yelled toward the mound, prompting Motte to throw up his arms as if he didn't know what the problem was.

Atlanta catcher Kurt Suzuki and home plate umpire Brian O'Nora stepped in to diffuse the tension. Pillar headed toward the outfield and the Braves left the field.

After the game, Pillar conceded to reporters that he was frustrated by his team's struggles, though he didn't mention what was said.

"It just stems from a little frustration in myself, just the way this series has been going," he said. "It was immature, stupid. It was uncalled for. It's part of the game. I'm a competitive guy."

Pillar, who said he has apologized personally to Motte, was much more contrite Thursday.

"There were a lot of different words that could have been said in the heat of the moment but that was the word that came out," said Pillar. "I regret saying it wholeheartedly."

Pillar will miss Thursday's game against the Braves, as well as Friday's game at Baltimore. He will forfeit approximately $6,066 of his $550,000 salary, with the money donated to charity.

The benches clear in Atlanta after Kevin Pillar takes exception to Jason Motte's quick pitch in the top of the 7th inning!!! <a href="https://t.co/fcwxtUWuYL">pic.twitter.com/fcwxtUWuYL</a>

"A large group decided that was appropriate," Atkins said. "There is no question that was in the heat of the moment, but that's no excuse."

Pillar said he hopes others will learn from his actions.

"I understand that I stand here with an opportunity to turn this into something that is going to be very positive," he said. "I have the ability to be made an example of and I'm willing to accept that."

The You Can Play Project, which advocates for inclusion in sport, also expressed optimism that Pillar could have a positive impact.

"A homophobic slur doesn't have to define @KPILLAR4," the organization tweeted. "Becoming a role model and advocate going forward will."

It's not the first time the Jays have suspended a player over the use of a homophobic slur. In 2012, former Toronto shortstop Yunel Escobar received a three-game suspension from the team after he played a game with an anti-gay slur written in Spanish on his eye-black stickers.

The team took a similar position toward Pillar.

Jays wanted to be proactive

"We wanted to make sure we were as proactive as possible to get in front of it," Atkins said.

Pillar's slur came during a heated game in which Braves star Freddie Freeman was struck on the left wrist by a pitch, resulting in a fracture that will sideline one of the game's best hitters for approximately 10 weeks.

In the eighth inning, both teams charged onto the field after Toronto's Jose Bautista homered off Eric O'Flaherty, stared down the Atlanta reliever and flipped his bat high in the air. Jace Peterson shouted something at Bautista as he rounded first base, and Suzuki exchanged words with the Blue Jays slugger after he touched home plate.

No punches were thrown, but O'Flaherty issued a harsh rebuke to Bautista after the game.

"That's something making the game tough to watch," the pitcher said, referring to previous home run celebrations by the Toronto slugger. "It's turned into look-at-me stuff. He hit a home run with (the Braves holding) a five-run lead and throws the bat around. I'm just tired of it. I've seen it from him enough."

O'Flaherty then brought up a punch that Bautista took just over a year ago during a scuffle with Texas second baseman Rougned Odor.

With files The Associated Press