Chris Colabello of the Toronto Blue Jays has been suspended 80 games after testing positive for the steroid dehydrochlormethyltestosterone, which is sold under the name Turinabol. 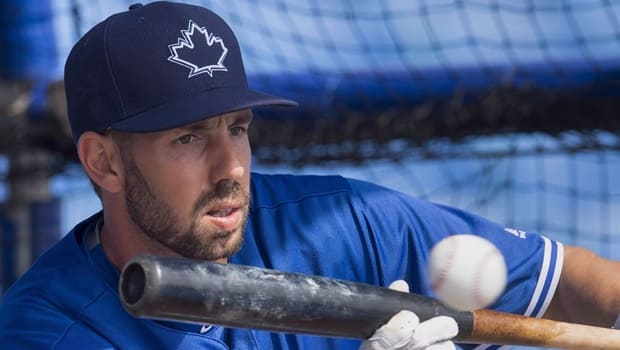 5 years ago
3:04
Toronto Blue Jays 1st baseman says he was mystified by the positive test. 3:04

Blue Jays first baseman Chris Colabello, who spent seven years buried in minor-league baseball's nether-regions, has had his major-league career put on hold for 80 games after testing positive for a performance-enhancing substance.

Colabello said he was mystified by the positive test, which mlb.com said was for the steroid dehydrochlormethyltestosterone.

"On March 13, I got one of the scariest and most definitely the least expected phone calls of my entire life," he said in a statement issued Friday by the Major League Baseball Players Association. "I was informed by the Players Association that a banned substance was found in my urine. I have spent every waking moment since that day trying to find an answer as to why or how? The only thing I know is that I would never compromise the integrity of the game of baseball. I love this game too much! I care too deeply about it.

"I am saddened more for the impact this will have on my teammates, the organization and the fans of the Toronto Blue Jays. I hope that before anyone passes judgement on me they can take a look at the man that I am, and everything that I have done to get to where I am in my career."

"A guy like him would never do something like that. I believe him wholeheartedly," he said. "He's a guy, especially with all the odds he had to overcome to get to the big leagues, he would never jeopardize it by doing anything like that."

Atkins say it's an 'unfortunate situation'

"We believe in him as a person and player. We also fully endorse the Major league Baseball drug testing policy," Atkins said in a statement. "Chris has overcome a great deal in his career and has been a key contributor to this team. While we are certainly disappointed with today's news, we're confident he'll return ready to compete and will have taken the steps needed to ensure that this does not happen again."

Colabello is batting just .069 this year. But he was a key contributor to the Jays last season when he hit .321 for the Blue Jays with 15 home runs and 54 RBIs.

Pillar said the positive drug test — which was followed by a failed appeal — hung over his teammate.

"For him to try to go out on the field what was going on was difficult," said Pillar.

The six-foot-four 210-pounder came to the big leagues the long way, playing in the independent leagues with Worcester and Nashua from 2005 to 2011.

After Baseball America named him Independent League player of the year in 2011, he signed with the Minnesota Twins. He played 55 games in the big leagues in 2013 and 59 in 2014 before signing a minor-league contract with the Jays for 2015.

"I love the guy," said Toronto manager John Gibbons, who said he did not know the full details of the suspension. "He's fought the odds his whole life. He'll fight this."

The Toronto manager said Colabello was "beloved" by his teammates.

The Jays clubhouse was late opening prior to Friday's game against the Oakland Athletics. Asked if Colabello had spoken to the team, Gibbons said: "That's personal."

Third baseman Josh Donaldson also declined to discuss the team meeting. "I'm not going in that direction. Sorry," he said.

"I'm disappointed that it happened," added Gibbons. "But I've kind of got a special bond with the kid. I was the manager here when he kind of made it. So there's something there. He's a unique guy, he really is ... This hurts me just like it hurts him."

Atkins, who said the team will support Colabello, was not made aware of the drug test before Friday morning. "That was the first time that anyone in this organization outside of Chris knew."

But Pillar said he had know for some time.

"I've known about it for some time now, he told me about it in Tampa [where the Jays opened the season earlier this month], what he is going through," Pillar told reporters.

In some way, I feel like Chris being able to tell everyone lifted a huge burden off of him. It's an extremely tough secret to hold onto for long time," he added.

Justin Smoak to start at 1st base

Justin Smoak, who had been platooning at first with Colabello, started at first base on Friday. Gibbons can also employ DH Edwin Encarnacion there.

The Jays, who have been short in the bullpen with Jesse Chavez feeling the effects of a sore back, called up left-handed pitcher Chad Girodo from Buffalo.

"He did a tremendous job in spring training, said Gibbons. "So now's his shot. We expect him to be good"

Gibbons said Drew Hutchinson will be summoned to pitch Sunday, to give the rotation a rest, necessitating another move.

The Jays gave left-fielder Michael Saunders and shortstop Troy Tulowitzki the night off, with Ezequiel Carrera starting in left, Ryan Goins shifting to shortstop and Darwin Barney starting at second.

Gibbons said Saunders's hamstring had flared up while Tulowitzki jarred his hip in a dive Thursday night.

"I don't think it's a big deal," he said of his shortstop.