Dallas Keuchel dominated the Yankees again, striking out 10 in seven scoreless innings to lead the Houston Astros over New York 2-1 on Friday night in the AL Championship Series opener.

Dallas Keuchel dominated the Yankees again, striking out 10 in seven scoreless innings to lead the Houston Astros over New York 2-1 on Friday night in the AL Championship Series opener.

Keuchel entered with a 1.24 ERA against the Yankees in regular season starts plus six shutout innings in the 2015 AL wild card game, He allowed four hits — all singles — walked one and joined Nolan Ryan and Mike Scott as the only Astros pitchers to reach double digits in strikeouts in a post-season game.

"It's just a good combination of command and pitchability," Keuchel said. "When I'm behind in the count, I feel just as good as if I'm 0-2. I think that's one of the biggest keys for me recently."

"He's got that late movement on both sides of the plate," Yankees manager Joe Girardi said. 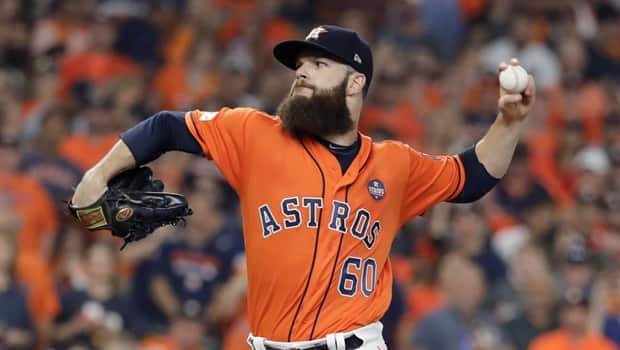 Carlos Correa and Yuli Gurriel hit RBI singles in the fourth off loser Masahiro Tanaka, and left fielder Marwin Gonzalez threw out Greg Bird at the plate trying to score on Aaron Judge's two-out single in the fifth.

Bird homered off Ken Giles with two outs in the ninth, and the closer struck out pinch-hitter Jacoby Ellsbury. Giles escaped a two-out jam in the eighth by striking out Didi Gregorius.

Greeted by MVP chants each time to the plate, Jose Altuve had three more hits and at 11 for 19 (.579) has the most hits in a team's first five post-season games since Seattle's Ichiro Suzuki in 2001.

Dallas Keuchel is the first pitcher with consecutive 7-K postseason games vs the Yankees since Pedro Martínez in 2003-04. <a href="https://t.co/ECbcMBBUlV">pic.twitter.com/ECbcMBBUlV</a>

Gonzalez guns him down

Houston is in the Championship Series for the first time since beating St. Louis in 2005. The Yankees, who overcame a 2-0 deficit to beat Cleveland in the Division Series, lost their sixth straight ALCS game since 2010.

After the Astros totalled eight runs in the first innings of their four AL Division Series games, Tanaka kept the Astros hitless until Altuve's infield single rolled through the pitcher's legs in the fourth. Altuve swiped second before scoring on Correa's single. Gurriel followed with a two-out single, his 10th hit of the post-season.

Bird singled to start the fifth and Matt Holliday, making his first appearance of the post-season, reached when Altuve dropped his slow bouncer to second for an error. Judge singled with two outs and Gonzalez, throwing with such force that he fell to the ground, made a one-hop throw to catcher Brian McCann, who tagged the sliding Bird at home to end the inning. The call was upheld in a video review.

Primarily an infielder, Gonzalez had just two outfield assists in the regular season. He beat his hand into his glove three times in celebration after watching McCann make the tag.