Aaron Judge does it again, sparks rally as Yankees even ALCS with Astros

Aaron Judge ignited a rousing rally with a home run, then doubled during a four-run eighth inning to spur the unflappable New York Yankees over the Houston Astros 6-4 Tuesday night and tie the AL Championship Series 2-2.

With a soaring shot headed for Monument Park, Aaron Judge got New York back on course for another memorable October.

"That ballpark is alive," Judge said after this latest rousing rally.

Judge ignited a comeback with a home run , then hit a tying double during a four-run eighth inning to spur the unflappable Yankees over the Houston Astros 6-4 Tuesday night and tie the AL Championship Series 2-2. 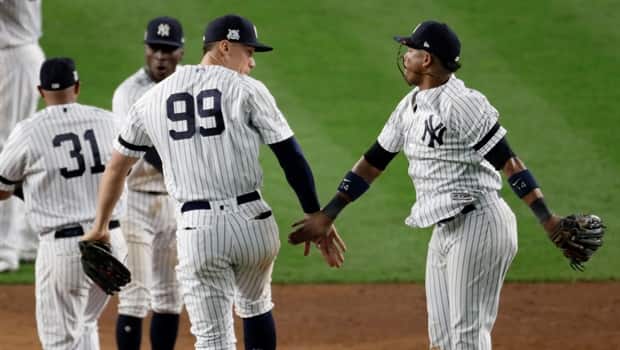 Judge powers Yankees as they even up ALCS

The Baby Bombers trailed 4-0 against starter Lance McCullers Jr. until Judge homered leading off the seventh. He tied it with a line drive that nearly left the park in the eighth and scored when Gary Sanchez hit a go-ahead two-run double off loser Ken Giles.

"I didn't know what to do after I touched home plate," Judge said. "I can't describe it."

'Every home game has been special'

The Yankees overcame three errors and have roared back from a second straight 0-2 series deficit — they beat Cleveland in the Division Series by winning three in a row to take that best-of-five matchup.

Aroldis Chapman struck out two in a perfect ninth to cap a three-hitter and get the save . Before a sellout crowd of 48,804, New York improved to 5-0 at home in the playoffs and won for the 18th time in its last 21 home games.

"Every home game has been special," manager Joe Girardi said. "I just feel like the fans are back. And I see things that I haven't in a while, and it reminds me a lot of when I was playing here."

Yankee Stadium will be rocking again when Masahiro Tanaka pitches for New York against Dallas Keuchel in Game 5 Wednesday. It's a rematch of the series opener, when Keuchel outdid the Japanese right-hander in a 2-1 Astros win.

An AL MVP candidate mired in a sluggish October, Judge sparked the Yankees by chasing McCullers, who baffled the Yankees with his power breaking ball.

Except for the last one.

Todd Frazier led off the eighth with a single to left, and pinch-hitter Chase Headley, in a 1-for-18 post-season slide, singled. He lost his balance stepping on first, fell en route to second, then took a step back before continuing on and getting his left hand in ahead of Jose Altuve's tag.

Headley was awarded second after a video review, and the ballpark boomed when crew chief Gary Cederstrom gave the signal. It got so loud that on-deck hitter Brett Gardner said he "kind of blacked out for a second."

Gardner brought in Frazier on a groundout, and Judge came to bat with the bundled, buzzing crowd on its feet.

He lunged for a low slider and drilled a double high off the left-field wall as a fan in a longsleeve yellow shirt reached down and touched the ball. Pinch-runner Jacoby Ellsbury came home with the tying run, and Gregorius grounded a single just beyond shortstop Carlos Correa's reach to put runners at the corner. Sanchez, who had been 0 for 13 in the series, scored them both with a slicing drive that skipped to the wall in right-centre.

"Those guys came up big for us today," Girardi said.

Judge had multiple hits for the first time since the AL wild-card game against Minnesota. He's still just 7 for 37 with 22 strikeouts in the playoffs, but he's 4 for 13 (.308) with three walks in the ALCS. He also homered in an 8-1 Game 3 win.

Judge said he used to dream about post-season at-bats in Yankee Stadium as a minor leaguer.

"The dreams aren't the same as reality," he said. "To be out with the crowd and the atmosphere, it was unbelievable."

The 35-minute bottom of the eighth was the latest stunning comeback for New York, which has overcome deficits of three or more 11 times this year, including in the wild-card game against Minnesota.

Not going to hit the panic button

Houston had not lost consecutive games since Sept. 8-10 at Oakland and had the major leagues' best road record during the regular season. The Astros are hitting .153 in the series.

"We're not going to hit the panic button because we lost two games in a row," Correa said. "We got Keuchel going tomorrow."

McCullers cruised in his first start since Sept. 30 and turned over a 4-1 lead to his bullpen.

"He was awesome," manager A.J. Hinch said. "And really proud of him because I know how important this start was for him."

Yankees starter Sonny Gray pitched one-hit ball through five innings. His teammates have yet to score for him in four career post-season starts while he's still on the mound, including twice with New York this year.

Houston took a 3-0 lead in the sixth after George Springer walked leading off and Josh Reddick reached on catcher's interference by Austin Romine — inserted into lineup for his defence.

Yuli Gurriel lined a three-run double off David Robertson for a 3-0 lead in the sixth and second baseman Starlin Castro misplayed Brian McCann's seventh-inning grounder for his second error, allowing Marwin Gonzalez to score from second.

"All of a sudden, the pressure's back on the other team," Frazier said. "It's the best place to play and the loudest place in baseball to play. No doubt about it."