Edwin Encarnacion drove in a franchise-record-tying nine runs by hitting three home runs, powering the Toronto Blue Jays to a 15-1 rout of the Detroit Tigers on Saturday afternoon. 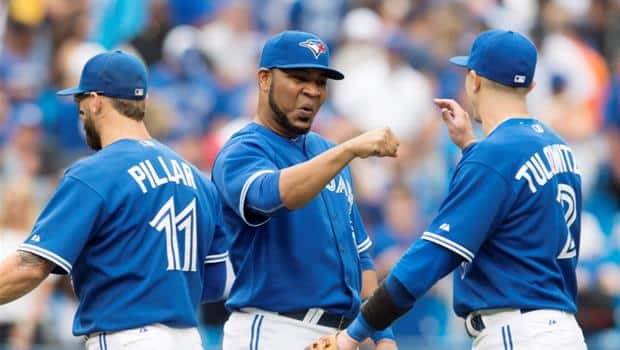 At first, Toronto Blue Jays manager John Gibbons thought "a couple idiots" were just throwing their hats onto the field, then he saw dozens more hit the turf. Teammates let Edwin Encarnacion know what was going on.

Hats rained down from all sections of Rogers Centre in the most Canadian way of celebrating Encarnacion's home run hat trick in the Blue Jays' 15-1 rout of the Detroit Tigers on Saturday afternoon.

Toronto is one-and-a-half games ahead of New York atop the American League East after the Yankees prevailed 3-1 on Saturday night for their second straight win over Atlanta.

Encarnacion's not a big hockey fan, but he got an education in that sport's tradition after making history.

"[Catcher Dioner] Navarro told me after they throw all the hats to the field, he told me when they score three goals, I think, they do that," Encarnacion said. "It made me feel happy."

Starting pitcher Drew Hutchison said fans throwing their hats onto the field was one of the coolest things he has ever seen. Encarnacion posed with the bag of hats in the clubhouse afterward and said he might sign them and give them back to show his appreciation.

"I hadn't seen it before," Gibbons said. "Don't they normally throw octopuses or something?"

Encarnacion hit a three-run homer in the first inning, a two-run homer in the sixth and then a grand slam in the seventh, driving in a franchise-record-tying nine runs. The nine RBIs tied the record set by Roy Howell in 1977, the Blue Jays' first year of existence.

The righty slugger, who finished 3-for-5, was one base runner away from another at-bat and the opportunity to become the 17th player in Major League Baseball history to hit four home runs in a game. Carlos Delgado did it here in 2003.

He's some kind of locked in. When he gets going, there's nobody better, nobody more dangerous.- Blue Jays manager John Gibbons on DH Edwin Encarnacion

Encarnacion's 27th home run of the season extended his career-best hitting streak to 24 games and was more than enough offence by itself. Nos. 28 and 29 were gravy as the Blue Jays reached the 15-run plateau for the second time in eight days.

During the hitting streak, Encarnacion is batting .400 with 10 home runs and 34 RBIs. It's the longest streak in the majors this season and four short of Shawn Green's franchise record of 28 set in 1999.

"He's some kind of locked in," Gibbons said. "When he gets it going, there's nobody better, nobody more dangerous. He's smoking right now."

When Encarnacion wasn't destroying Tigers (60-69) pitching, the rest of Toronto's lineup was. The Blue Jays' 18 hits were their second-most this season.

Toronto (73-56) improved its major-league-best run total to 709, 105 more than any other team. Saturday was the 21st time this season the Blue Jays scored more 10 or more runs in a game.

"To score as many runs as we've had and had the big, big innings like we've had at this level, it surprised the hell out of me, to be honest with you," Gibbons said. "It doesn't happen that often up here at this level, and we've done it so many times."

Ben Revere had a team-high four hits and drove in a run, while American League MVP candidate Josh Donaldson drove in two as part of his three-hit day. Russell Martin hit a two-run home run, and Ryan Goins got in on the act with an RBI single.

On the mound, Hutchison (13-2) was masterful in his return to the starting rotation, allowing one run on six hits and striking out seven in seven innings.

The only run Hutchison gave up came after right-fielder Jose Bautista lost a fly ball in the sun. In his first major-league start since Aug. 16 and following a demotion to the minors, Hutchison tossed a gem to lower his earned-run average from 5.06 to 4.86.

"You can't go out there and try to make any game more important than another one," Hutchison said. "Obviously I wanted to make that start on the road. I wasn't given that opportunity. But I was given the ball today and I was able to show what I could do with it."