Edwin Encarnacion drove in four runs on two doubles and added his 21st home run of the season as the Toronto Blue Jays finished off a four-game sweep of the Minnesota Twins with a 9-3 win on Thursday. 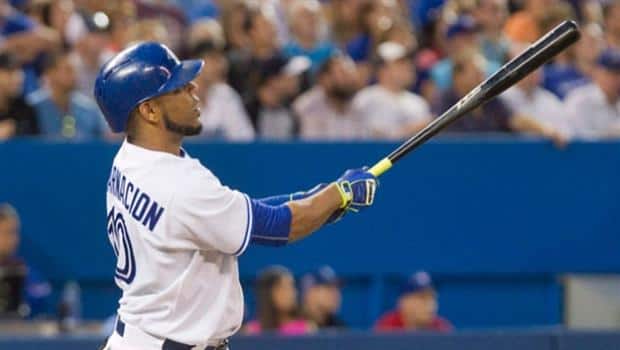 With an uncanny combination of power and speed, the Toronto Blue Jays finished off a four-game sweep of the Minnesota Twins and are streaking into Yankee Stadium as the hottest team in baseball.

Five players drove in runs Thursday at Rogers Centre as the Blue Jays blew out the Twins 9-3 to extend their winning streak to five going into a crucial weekend series at the American League East-leading New York Yankees. Toronto has won eight of its past nine games and is now 4 1/2 games back of the division lead.

"You've got that feel every day when you come to the field, 'Who's next?"' winning pitcher Mark Buehrle said. "No matter if it's a rookie pitching or a guy that's been around for a while, you've got that feel of, 'Who's butt are we going to kick today?"'

Edwin Encarnacion drove in four runs on two doubles and his 21st home run of the season. When Minnesota intentionally walked him in the fifth inning, catcher Dioner Navarro knocked in two more.

Seven batters either drove in or scored a run, more evidence that almost no holes exist in what has quickly become the most feared lineup around the league. Twins outfielder Torii Hunter thinks the Blue Jays can make a lot of opponents look bad.

"There aren't too many teams going to beat that team over there," Hunter said. "The way they hit the ball is just unbelievable. When they hit the ball, it sounds like car crashes. They're one of the best teams in baseball, offensively."

Even Toronto's No. 9 hitter Ben Revere got into the action in the series finale, going 3 for 4 with three runs scored. The speedy left fielder advanced to third base on a bunt single and a throwing error and provided the kind of multidimensional threat that's invaluable in a playoff race.

The Blue Jays were also lights out defensively. Kevin Pillar made a highlight-reel, full-extension diving catch in centre field in the eighth inning that was worthy of a standing ovation from the crowd of 34,847 and his teammates in the home dugout.

On the mound, Buehrle allowed three runs on five hits in seven innings, even though he called it a "bad day." Pitching with so much run support, Buehrle didn't have to worry about giving up a two-run home run to Trevor Plouffe or a solo shot to Aaron Hicks.

Buehrle was never in real trouble, and neither were the Blue Jays (58-52), who further solidified their hold on an AL wild-card spot while dealing another blow to the free-falling Twins (53-53). Minnesota held that wild-card spot when the series started Monday.

"We got demolished these four games," Hunter said. "We got crushed."