Curt Casali drove in the winning run with a single in the ninth inning Saturday night and the Tampa Bay Rays beat the Toronto Blue Jays 4-3. 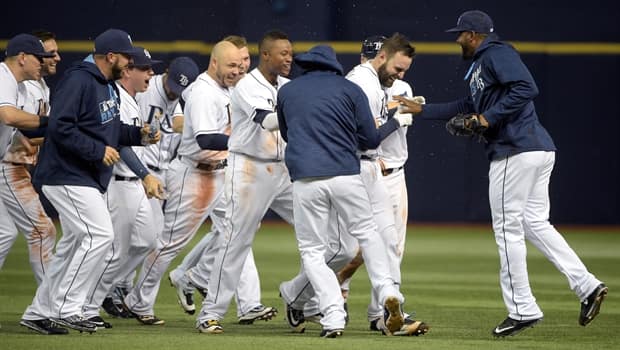 After the first walkoff hit of his career, Curt Casali had to give credit to the man in the on-deck circle.

"I definitely realized that Logan Forsythe was on deck," Casali said Saturday night after his single drove in the winning run for the Tampa bay Bay Rays in a 4-3 victory over the Toronto Blue Jays. "I figured if I was in their shoes, I'd want to pitch to me as well."

Casali's single off Brett Cecil (0-5) drove in Brad Miller, who led off the inning by beating out a pinch-hit single. After Miller outraced first baseman Justin Smoak to the bag, Kevin Kiermaier followed with a double before Casali's hit.

Forsythe went three for three with a walk and tied the game in the seventh with a home run off Toronto starter J.A. Happ, his fourth of the season.

Xavier Cadeno (2-0) got the win after retiring two Blue Jays in the ninth.

Jose Bautista's two-run home run off Chris Archer gave the Blue Jays a 2-0 lead in the third. It was Bautista's fifth homer of the season.

Forsythe's two-out single got the Rays on the board in the third and Evan Longoria tied it 2-2 by hitting Happ's first pitch of the sixth inning for his fourth home run.

Kevin Pillar's first homer regained a 3-2 lead for the Blue Jays in the seventh.

Archer gave up one hit — Bautista's homer — in six innings, walking four and striking out four. He retired the last 11 batters he faced.

"After I gave up that homer, something inside of me ignited and I just said I'm going to attack, going to pound the zone," Archer said. "And I felt much more like myself after the homer than early. I think I may have been nibbling a little too much."

Happ, who has a 1.87 ERA in 15 starts dating to August, pitched 6 2/3 innings, giving up six hits and three runs while striking out seven.

"I thought he was great," Toronto manager John Gibbons said. "He had great stuff tonight and he pitched like he's been doing all year. He deserved to win a game like that."

The Blue Jays had only three hits. They have 10 hits, including six home runs, in the first two games of the series.