Aroldis Chapman got eight outs in the longest relief appearance of his career and the Chicago Cubs held off Cleveland 3-2 Sunday night, forcing a Game 6 in the World Series.

Series goes back to Cleveland on Tuesday 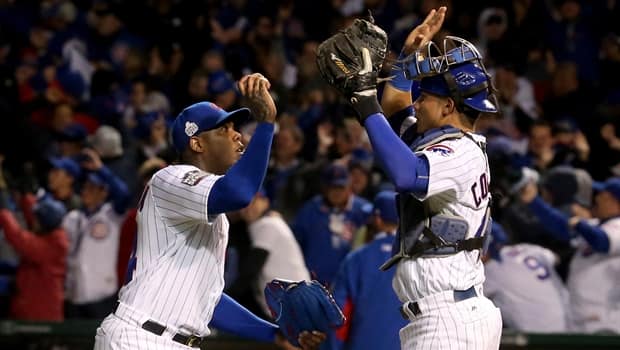 4 years ago
0:27
Chicago defeated Cleveland 3-2 on Sunday night at Wrigley Field to force a game 6 of the World Series on Tuesday in Ohio. 0:27

They have waited 108 years for a championship. So with this World Series on the verge of slipping away, the Chicago Cubs could not wait any longer.

Manager Joe Maddon summoned closer Aroldis Chapman from the bullpen in the seventh inning for the first eight-out save of his big league career, needing to hold off the Cleveland Indians in Game 5.

A white flag with a blue "W" was raised atop Wrigley Field after a Series win for the first time since Oct. 8, 1945, a Game 6 win over Detroit. Fans stayed long after the final out and sang to "Sweet Home Chicago" as Cubs returned to the field for media interviews.

"High anxiety," first baseman Anthony Rizzo said. "A lot of deep breaths. Every pitch gets bigger and bigger as the game goes on. It's unbelievable. Great win here, we sent these fans off with a win, now we have to go to Cleveland and win."

Now, the team that led the majors in wins this year will try to extend its season again Tuesday night when Chicago right-hander Jake Arrieta faces Josh Tomlin at Cleveland in Game 6.

Chicago is trying to become the first club to overcome a 3-1 Series deficit since the 1985 Kansas City Royals and the first to do it by winning Games 6 and 7 on the road since the 1979 Pittsburgh Pirates.

"It's something you can't normally do during the season without beating somebody up too badly," Maddon said.

The lefty struck out four and fanned Jose Ramirez, who had homered earlier, with 101 mph heat to end it.

"That was a big ask and he answered," Indians manager Terry Francona said. "That was impressive."

With the crowd at the Friendly Confines desperate for a win, Kris Bryant homered to start a three-run burst in the fourth off Trevor Bauer that gave Jon Lester a 3-1 lead. The Indians nicked him for a run in the sixth, and Carl Edwards Jr. took over to begin the seventh with a 3-2 edge.

Chapman came in with a runner on second and one out. He stranded the potential tying run at second base in the seventh and at third in the eighth, then pitched a 1-2-3 ninth.

Lester, the Game 1 loser, improved to 4-1 in Series play by allowing two runs and six hits.

Ramirez homered in the second to put the Indians ahead. Cleveland closed within a run in the sixth when Rajai Davis singled, stole second scored on a two-out single by Francisco Lindor, who is hitting .421 in the Series.

Mike Napoli singled against Edwards leading off the seventh and took second on a passed ball by rookie catcher Willson Contreras, who had just replaced David Ross.

Carlos Santana flied out, and Chapman came in to strike out Ramirez with a 100 mph pitch. He hit Brandon Guyer on the left leg and retired Roberto Perez on a groundout as fans screamed in relief.

Then in the eighth, Davis singled with one out on a hard grounder down the line that Rizzo stopped with a dive — Chapman took a few seconds before heading to cover first, leaving Rizzo with no one to throw to. Davis stole second, and after Jason Kipnis fouled out, swiped third standing up. Lindor took a 101 mph pitch at the knees for a called third strike , then stood in the batter's box for nearly 20 seconds in anger and frustration.

Bauer, his pinkie seemingly healed from a cut sustained while playing with a toy drone during the AL Championship Series, dropped to 0-2 in the Series, giving up three runs and six hits in four innings.

After a pair of relatively balmy autumn nights on the North Side, the temperature dropped to 50 degrees at game time and a 10 mph win added chill. Maddon wore a ski hat with a blue pompom rather than a baseball cap.

Bryant, in a 1-for-15 slide, led off the fourth by driving a fastball into the left-field bleachers, where a fan in the first row dropped it.

Rizzo sent the next pitch off the ivy on the right-field wall for a double, admiring its flight before hustling, took third on Ben Zobrist's single and came home with the go-ahead run when Addison Russell reached out and topped a pitch down the third-base line for an infield single.

Jason Heyward took a called third strike, slumping Javier Baez dropped a bunt down the third-base line for a single that loaded the bases and Ross, a 39-year-old making perhaps his final big league start, hit a sacrifice fly for a 3-1 lead.