Edwin Encarnacion hit a grand slam to extend his hitting streak to 21 games, helping David Price get a win on his 30th birthday in Toronto's 12-4 victory against the hometown Texas Rangers on Wednesday night. 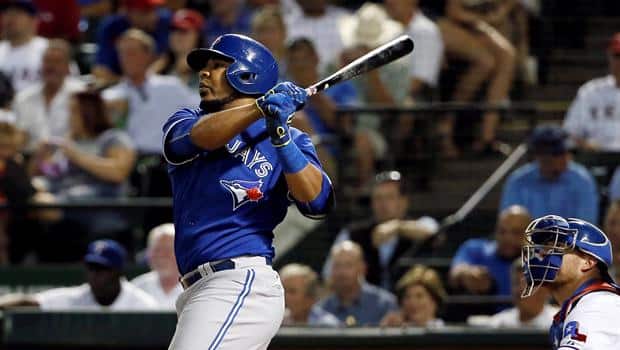 Encarnacion hit a grand slam to extend his hitting streak to 21 games, boosting Price when he was pitching on his birthday for the first time in the majors and helping the Blue Jays to a 12-4 victory against the hometown Texas Rangers on Wednesday night.

The right-handed slugger pulled a pitch into the Toronto bullpen in left-centre for his 26th homer after Kevin Pillar opened a six-run sixth inning with a long ball that chased Texas starter Colby Lewis (14-6).

Lewis issued four of a season-high 11 walks by Rangers pitchers.

Price (13-4) threw five scoreless innings after allowing Adrian Beltre's two-run homer in the first. While he was still struggling in the third, he got help on a spectacular, leaping catch at the wall in left field by Ben Revere that saved a run.

"After we got out of that inning, I told him that's hands down the best birthday gift that I had ever received," Price said. "It's a coin flip between that and 12 runs."

The American League East-leading Blue Jays won their fifth straight, while the Rangers dropped a half-game behind Minnesota in the race for the second AL wild card.

Jose Bautista walked four times and scored twice as Toronto went two games up in the division on the New York Yankees, who lost 6-2 to Houston. The Astros moved 5 1/2 games ahead of Texas atop the AL West.

Lewis threw two of three wild pitches by the Rangers, both during a 10-pitch at-bat that ended with former Texas player Justin Smoak's two-run homer to break a 2-2 tie in the fifth inning. Smoak's 13th long ball hit off the facade of the upper deck in right field and extended Toronto's franchise record to 16 straight road games with a homer.

We've been waiting for Eddie to break out in a big way. I'm seeing it now. I think he's feeling it like the rest of the guys.- Blue Jays manager John Gibbons on DH Edwin Encarnacion

Encarnacion's second grand slam of the season, both against the Rangers, and the eighth of his career ended a stretch of six straight batters reaching to start the sixth. Pillar's eighth homer was one of his three hits.

"We've been waiting for Eddie to break out in a big way," manager John Gibbons said. "I'm seeing it now. I think he's feeling it like the rest of the guys."

After Texas reliever Spencer Patton walked two and didn't retire any of the five batters he faced, Sam Freeman walked four more. Anthony Bass had a wild pitch that scored Troy Tulowitzki for a 12-2 lead in the seventh as Toronto set a club record with its 20th game of at least 10 runs.

"We helped them out tonight with 11 walks," Texas manager Jeff Banister said. "I know they hit the three home runs. But the reality is, we can't walk 11. That's unacceptable."

Price retired the last nine hitters he faced after the Rangers started the fourth with a single by Mike Napoli and a walk to Elvis Andrus, who was celebrating his 27th birthday. The left-hander is 4-0 in five starts since the Blue Jays acquired him from Detroit the day before the July 31 trade deadline.

It was Price's second straight win in Texas, where he had a 7.36 earned-run average in five starts coming in. He allowed five hits and two runs with eight strikeouts in his first appearance at the Rangers since a complete game in Tampa Bay's 5-2 victory in an AL wild-card tiebreaker in 2013.

Beltre put Texas ahead 2-0 with his 407th homer, tying Duke Snider at No. 51 on the career list. Shin-Soo Choo had a two-run single among his three hits.

Rangers: 2B Rougned Odor said doctors saved the nail on his right middle finger after a grounder almost tore it off Tuesday. He eventually left the game and still had a splint Wednesday. He's hopeful for a Thursday return. … C Carlos Corporan (sprained left thumb) started a rehab assignment at double-A Frisco. It's his second rehab stint after the first was cut short Aug. 3 by soreness in the thumb.