The Toronto Blue Jays defeated the Texas Rangers 5-1 in Game 3 of their American League Division Series on Sunday. 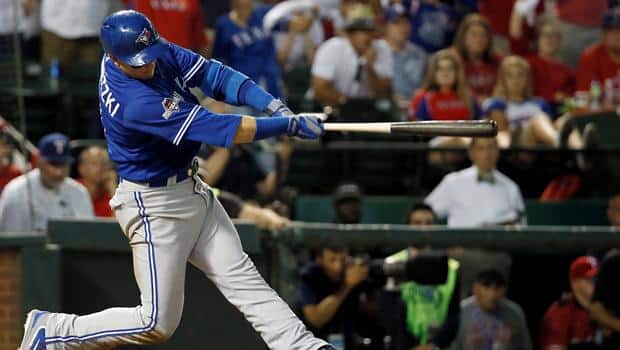 5 years agoVideo
0:54
Toronto avoided elimination Sunday evening, defeating Texas 5-1 in Game 3 of the ALDS. Troy Tulowitzki's first post-season hit with the Blue Jays was a big one, crunching a 3 run home run off Chi Chi Gonzalez in the 6th inning. 0:54

Estrada limited the Rangers to one run over 6 1/3 innings and Tulowitzki, who had been hitless in the series, drove in four runs — including a three-run homer in the sixth to cut Texas' lead to 2-1 in the best-of-five series.

"You could tell early on [Estrada] was on," said Toronto manager John Gibbons. "Job well done, but he's been doing that all year.

"He was spotting his fastball, great changeup and I thought he used his curveball real well."

Tulowitzki's four RBI's are the most by a Jay in the post-season since Joe Carter's four in clinching the 1993 World Series. The franchise post-season record is five by Tony Fernandez in 1993.

The Jays plan all hands on deck in another must-win game Monday, with starting pitchers David Price and Marcus Stroman both available to come out of the bullpen if needed to back up veteran knuckleballer R.A Dickey against Rangers starter Derek Holland.

Price warmed up in the bullpen in the seventh, when the Rangers finally got on the board.

Roberto Osuna pitched a 1-2-3 ninth to close out the Toronto win.

While Estrada mowed down one batter after another, the Jays' offence was squandering chance after chance early on a steamy 33-degree Celsius night at Globe Life Park, with a sellout crowd of 50,941 in Rangers red and blue.

Toronto grounded into five double plays, a franchise record for the post-season. The previous mark was two.

It seemed like another Houdini-like escape for Texas in the sixth, with a bases-loaded threat with no outs looking like it might fizzle after yet another double play denied the Jays by removing the lead runner. But Tulowitzki, 0-for-11 in the series up until then, slammed the ball 367 feet into right field for a 5-0 lead.

"Tulo needed that he really did, he had the long lay off and injury," said Gibbons. "Figured that maybe sets him off. If he catches fire we're real dangerous."

Estrada, meanwhile, cooly retired the first eight batters he faced and 12 of the first 13. He allowed just three Rangers on base in the first six innings, on a double and two singles.

He struck out four and walked none in a typically efficient 89-pitch outing that featured 57 strikes.

Estrada had little margin for error as the Jays offence, despite a slew of chances, only backed him with single runs in the third and fourth inning until Tulowitzki's first post-season hit as a Jay.

Estrada left with one out in the seventh after yielding two singles. A groundout off Aaron Loup scored a run for Texas, before Mark Lowe snuffed out the inning.​