There was Jose Bautista's emphatic bat flip after his tiebreaking homer last October, and then Rougned Odor's punch in May that ignited a bench-clearing brawl the last time the Texas Rangers and Toronto Blue Jays played. Today, the bitter rivals sqaure off in Game 1 of the ALDS at 4:30 p.m. ET. 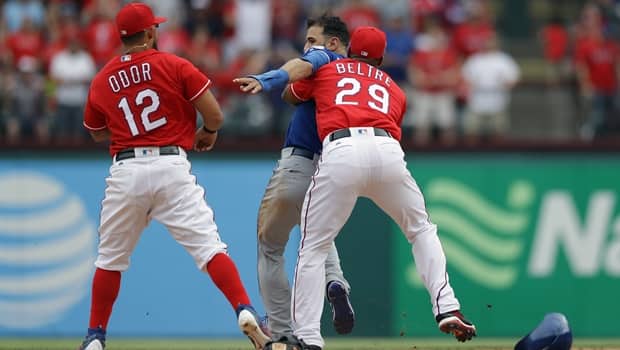 4 years ago
6:54
Mike Wilner sizes up the Toronto versus Texas series, a match up filled with emotion. 6:54

There was Jose Bautista's emphatic bat flip after his tie-breaking homer in the American League Division Series-clinching game last October, and then Rougned Odor's punch in May that ignited a bench-clearing brawl the last time the Texas Rangers and Toronto Blue Jays played.

Now the rematch begins in Game 1 (Thursday 4:30 p.m. ET) of another ALDS between teams that clearly have some bad blood between them.

On May 15 in Texas, Rangers' second baseman Odor punched Bautista. The scuffle began after Bautista, on base after getting hit in the ribs by a pitch, made a late and hard slide trying to break up a double play at the end of a contentious series.

"It's unfortunate that it got out of hand last time, but it did, so it's in the past and hopefully stays there," Bautista said. "I'm not looking for revenge, I'm looking to win ball games. That's entirely what my focus is on, and hopefully I get to keep it there."

With all that recent history, close attention will be paid to every inside fastball, hard slide or any emotional outburst.

But these are also two teams with much more on the line than retribution after falling short of their World Series goal last year, and now with another chance.

However, there could be some edgy moments when both teams are on the field with the post-season adrenaline flowing.

"I think it's going to bring a lot more excitement to the games," Andrus said. "It's easy right now to say nothing's going to happen or might happen. But when you're out there and playing, and all the emotion any inning can bring, anything can happen."

Odor, who was playing ping-pong when the Rangers clubhouse was first open to reporters Wednesday, repeatedly said that he was focused on helping his team win the series. He said the Rangers would play like they have all year in winning an AL-high 95 games.

When asked how much what happened in May would be a distraction, Odor responded, "I think that's over already. I don't worry about that."

Asked if that was the best punch he had ever thrown, he said, "I don't worry about that."

And, yes, Bautista has looked forward to being back in Texas, but not for the reasons many people would expect.

"In this situation, yeah," Bautista said of the playoffs. "Other than that, I haven't really given it much thought."

"We don't think it's a big deal but it's probably wise to be a little cautious this time of year," Gibbons said.