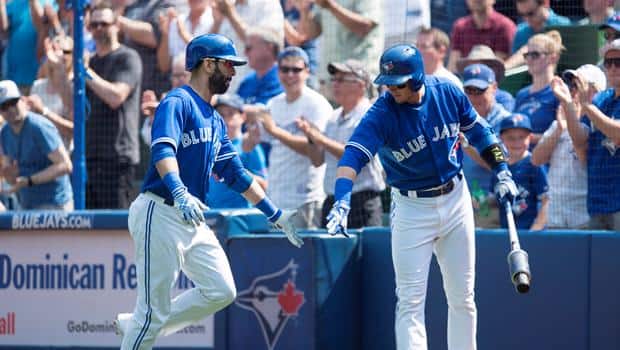 David Price got to 100 career wins by respecting every lineup he faced.

Price allowed one run in seven innings for his 100th career victory as the Blue Jays topped the Orioles 5-1 on Saturday. The victory ended Toronto's three-game skid against Baltimore and Price earned his first win over the Orioles since Sept. 20, 2013.

"I don't look at any opponent to be any different," said Price. "I'm probably a little bit more familiar with their lineup facing those guys as many times as I have in my career. Their team, for the most part, has kind of stayed the same so it's a club that always swings the bat well against me.

"It's been a while since I've beaten them so that was good."

Toronto's win coupled with the New York Yankees' loss to Tampa Bay, gave the Blue Jays a game and a half lead for first place in the American League East.

Price (14-5) gave up an RBI single to Caleb Joseph in the seventh. The lefty finished the game by allowing three hits while striking out eight for his fifth win as a member of the Jays. It was Price's fourth home start since being acquired from the Detroit Tigers in July.

"He was great. At the end of the day, that's why he's here," said Blue Jays manager John Gibbons. "Against a tough-hitting lineup — he faced most of those guys in that lineup so many times — makes it (even tougher) facing guys like that and to shut them down. It's pretty impressive."

"I got the loss, so I didn't pitch very well, but I felt good. They're just a really good hitting team," said Wright. "I had zero confidence going into that game (last time vs Toronto). I have no idea why. I wasn't attacking and I tried to attack a lot more today than I did last time.

"You have no chance to get an out if you don't throw strikes. I felt like attacked the zone pretty well today. That's a positive."

Jose Bautista got Toronto on the board in the first with his 32nd home run of the season. The Blue Jays right-fielder added to the lead in the third with a ground rule double that scored Kevin Pillar.

Toronto took a 3-0 lead in the fourth on Ben Revere's RBI single.

The Jays added to their lead in the fifth with Justin Garcia on in relief. Troy Tulowitzki scored on an RBI ground out by Russell Martin. Ryan Goins then hit a ground rule double to left centre that scored Justin Smoak giving Toronto a 5-0 lead.

Bautista showed off his defensive game in the ninth inning by tracking a pop fly from Steve Pearce in shallow centre and making a diving grab.