A three-run home run from Carlos Beltran silenced a sellout crowd at Rogers Centre and made the Toronto Blue Jays' winning streak and brief stay in first place come to an abrupt end. 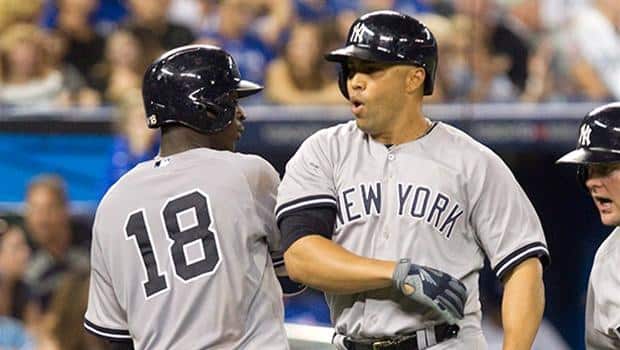 A three-run home run from Carlos Beltran silenced a sellout crowd at Rogers Centre and made the Toronto Blue Jays' winning streak and brief stay in first place come to an abrupt end.

David Price got into trouble in the eighth inning, and reliever Aaron Sanchez gave up the pinch-hit blast as the Blue Jays lost to the Yankees 4-3 Friday night, snapping their streak at 11.

"We knew those guys were going to be ready to play tonight," Price said. "They snuck it in late. That's part of it. A loss like this can definitely bring your team closer whenever it happens like that."

The Blue Jays fell a half-game back in the American League East after leading the division since Wednesday night.

Price allowed at least one base runner in each of his first seven innings of work and needed 100 pitches to get through it. But manager John Gibbons opted to let the ace lefty start the eighth inning.

That decision proved to be ill-advised when Price allowed singles to Mark Teixeira and Brian McCann and then an RBI double to Chase Headley. When his night ended at 112 pitches, Sanchez served up a dead-meat fastball to Beltran, who drilled the ball over the fence in right-centre to erase the deficit.

"It backfired," Gibbons said. "When those don't work, you analyze them, that's for sure. And tonight it didn't work."

Sanchez blew two high fastballs past Beltran earlier in the at-bat and tried to do the same on the pitch that turned into the home run. The 23-year-old conceded he was too "amped up" by the raucous sellout crowd of 46,689.

"I just got a little excited," Sanchez said. "The moral of the story is I didn't get my job done, and it cost us a win."

It was Toronto's first loss since Aug. 1, two days before Price made his debut.

Price, who shut out New York on Saturday at Yankee Stadium, wasn't at his sharpest in allowing 11 hits. Even in what Gibbons called a "gruelling" night, Price struck out six and kept the Yankees off the board until the eighth.

In the process, the Blue Jays passed the 1934 Tigers in becoming the first major-league team to shut out the Yankees for more than 31 consecutive innings. That streak got to 33 full innings before Price and Sanchez gave up runs.

"I felt good with the exception of the double to Headley," Price said. "I felt like that inning I really made good pitches. But that's baseball, that's part of it, and if you don't like it, pitch better."

It looked like Toronto had enough offence to get by, given the way its pitching had dominated not just against the Yankees but all month long. After going without a hit for the first two innings against New York starter Ivan Nova, the Blue Jays scored three runs in a hurry on an RBI groundout by Troy Tulowitzki, a double by Jose Bautista and a sacrifice fly by Edwin Encarnacion.

"It was a good battle," Gibbons said after the Blue Jays' fourth game against the Yankees in just over a week. "That one just came down to the big at-bat by Beltran. We hit some home runs in New York to win the games, Beltran hit it tonight to win it."