Christin Stewart hit a two-run homer in the 10th inning and the Detroit Tigers opened their season with a 2-0 win over the Toronto Blue Jays on Thursday, following a tight pitching duel between Marcus Stroman and Jordan Zimmerman.

Marcus Stroman has been adamant that 2019 would mark a return to form for him after a rough season last year.

Despite getting saddled with a no-decision in Toronto's season opener Thursday — a 2-0 loss in 10 innings to the Detroit Tigers — the Blue Jays right-hander was content with his first step on that comeback trail that he's expecting.

Stroman walked four batters, including the first one he faced on four straight pitches, but allowed just two hits while striking out seven over seven innings before 45,048 at the Rogers Centre.

"Just excitement, to be honest with you," Stroman said of what he was feeling during the late afternoon start. "I had a pretty bad year last year so I did everything in my power to get right this off-season and I did that.

"So I'm just excited to toe the rubber every fifth day." 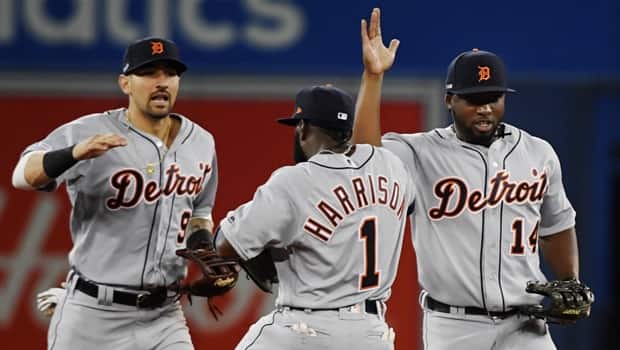 2 years agoVideo
1:22
Christin Stewart hit a two-run homer in the 10th inning to give Detroit a 2-0 win over Toronto on opening day. 1:22

Christin Stewart hit a two-run homer in the 10th inning, launching an 0-2 slider off newcomer Daniel Hudson (0-1) as Detroit (1-0) broke a scoreless tie to win the game.

Shane Greene pitched the bottom of the 10th for the save and Victor Alcantara earned the win after a sparkling start from Jordan Zimmermann.

The Tigers right-hander, who allowed just one hit over seven innings, had a perfect game broken up with a two-out infield single from Teoscar Hernandez in the seventh.

Hernandez, one of only two Jays with a hit all game, laced a sharp liner up the middle on Zimmermann's 65th pitch. Tigers second baseman Josh Harrison dove and got his glove on it before firing a desperation throw to first, but Hernandez beat the ball to the bag.

"He had like 60-something pitches so everyone was seeing him well and swinging (but) just missing it," Toronto catcher Danny Jansen said of Zimmermann's performance. "He had a good cutter today and kept guys off balance with his slider.

"But it was a day that just didn't go our way.

Stroman, meanwhile, did not allow a hit until the sixth inning — a two-out single from Nicholas Castellanos.

He blamed his four-pitch walk to start the game on Opening Day jitters.

"I was a little too amped up coming out," Stroman said. "Ideally I never want to have that many walks in a game so that's something I'll look to improve on my next start.

"But I love these games. I love the energy from the crowd from the second that I walk out there and I feel like as far as big-time games there's nobody that I'd want out there more than me."

The 27-year-old let out an emphatic roar after striking out Grayson Greiner for a third time to end his outing in the seventh.

Stroman, hampered by a shoulder injury, ended 2018 with a disappointing 4-9 record and 5.54 earned-run average. He said his shoulder problems limited his pitch selection last season, something he doesn't have to worry about now.

"I'm back to throwing whatever pitch I want in whatever count," Stroman said. "Last year I'd go into games and throw one pitch, two pitches. I have six pitches. My body feels good, my head feels good. I'm back to doing whatever I want out there.

New Blue Jays manager Charlie Montoyo, making his managerial debut at the MLB level, said he was confident in his team's chances with Stroman on the mound.

"That's what makes me feel good about this team, that we have a chance every day with our starters, and Marcus was outstanding," Montoyo said. "He did walk a couple guys there and his pitch count was a little high but he took us to the seventh inning. ... That's all you can ask for a pitcher. He was very good."

Joe Biagini and closer Ken Giles combined on six consecutive strikeouts over the eighth and ninth innings, respectively, for Toronto.

While the Blue Jays aren't expected to contend for a playoff spot this season, Montoyo is hesitant to use the term "rebuild" in describing Toronto's situation.

"Nobody in (the clubhouse) is thinking about rebuilding. Everybody's ready to win games," Montoyo said before the game. "I heard that word last year with the Rays ... and they won 90 games. And they know that. I brought that up in my first meeting with the players and we're going to compete every day and we're going to play to win."