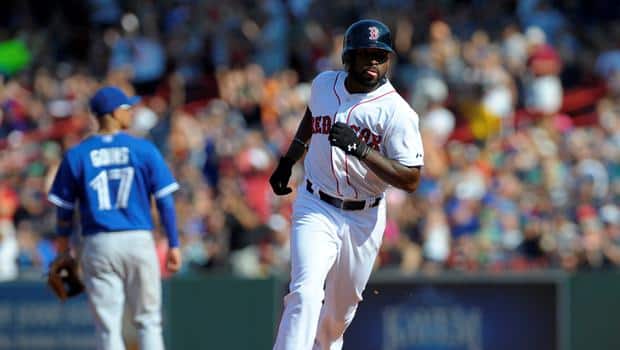 5 years agoVideo
1:00
The Red Sox right fielder collected 4 hits including a homer and 4 RBI as the Sox crushed the Jays on Monday 1:00

The Toronto Blue Jays are trying to slug their way to an AL East title.

They'll need better pitching than this, though.

The Blue Jays lost for just the fourth time in 16 games, but had their lead atop the East sliced to a half game over the New York Yankees, who beat Baltimore 8-6 on Monday.

Working on seven days' rest after complaining of fatigue, Mark Buerhle (14-7) gave up five runs on nine hits in 3 1-3 innings. The bullpen wasn't much better, giving up six runs on eight hits.

The Blue Jays lost the opener of their last series in Baltimore 10-2 but responded to win the next two games.

Toronto manager John Gibbons said he has "some concerns" about Buehrle, who has had a couple of tough outings recently.

"I felt better today than I have in the last couple," he said. "It's pretty much September is what it was. It was just one of those days where their offence was there. I'll take today — besides the results — just about any day."

Josh Donaldson and Justin Smoak each hit solo homers for Toronto. Donaldson's was his 37th.

Toronto leads the majors with 191 homers and 750 runs.

Bradley added two singles and a double and Travis Shaw hit a two-run homer for Boston, which posted its fourth straight win and eighth in 11 games.

"I'm not trying to force anything," said Bradley of his recent offensive surge. "I'm trying to swing at strikes."

Porcello (7-12) had his third consecutive strong start since coming off the disabled list following a right triceps strain. He allowed four runs — three earned — and eight hits over 7 1-3 innings.

David Ortiz had a pair of doubles and an RBI. The second was high off the Green Monster — below a sign with the white numbers "497" that signify his chase to become the 27th player to hit 500 career homers.

The Red Sox broke in front 5-1 by scoring twice in both the third and fourth.

Bradley homered into the first row of Monster seats in a three-run sixth.

The 25-year-old outfielder, who shuttled between Triple-A Pawtucket and the majors this season, continued his torrid pace. Since Aug. 9, he's hitting .446 with 24 extra-base hits in 25 games.

"I think that there is a general overall confidence that he is showing right now," Red Sox interim manager Torey Lovullo said. "And he can walk up to the plate and hit at any count and any pitch at any part of the at-bat, and that is from a lot of hard work behind the scenes that he has put in."

Bradley and Mookie Betts had consecutive RBI singles, making it 5-1.