Baseball's sounds of summer jolted an eerily quiet Rogers Centre on Thursday night as the Toronto Blue Jays played an intrasquad game at training camp in preparation for a regular season that's only two weeks away.

Baseball's sounds of summer jolted an eerily quiet Rogers Centre on Thursday night as the Toronto Blue Jays played an intrasquad game at training camp in preparation for a regular season that's only two weeks away.

With the roof open on a sunny but steamy evening, every sound seemed exponentially louder in the cavernous stadium.

Starter Matt Shoemaker opened by firing a fastball that hit the catcher's mitt with such a thud that smoke wouldn't have been a surprise. The empty ballpark — and lack of ambient noise from the hushed downtown core — also made the sharp crack of bat striking ball unusually emphatic.

In an effort to give the scrimmage a real-game feel, batters had walkup music and tunes were played on the loudspeakers between innings. The boom-boom-clap of Queen's "We Will Rock You" during one break in the action felt like an odd choice with no one in the ballpark to clap along.

With a handful of players wearing masks, the game itself had a steady flow over the 95-minute session — although there were no scoreboards, player introductions or in-house announcer. With media allowed in for the first time since camp opened Monday, attendance was essentially limited to the two dozen reporters who watched from the 200 level behind home plate.

WATCH | Mike Wilner on the return of baseball: 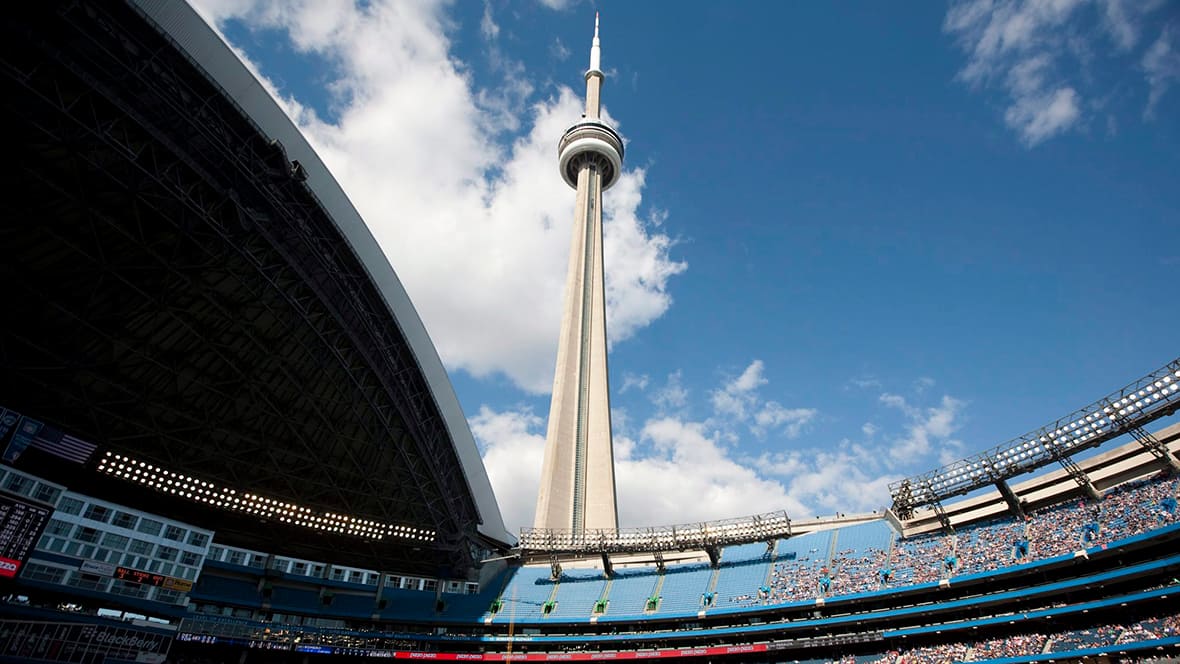 Mike Wilner discusses Blue Jays and the return of baseball

8 months ago
7:47
Blue Jays broadcaster Mike Wilner joined CBC News Network to talk about the Blue Jays return to Toronto, and the upcoming MLB season slated to begin at the end of July. 7:47

Shoemaker, who missed most of last season after tearing a knee ligament, looked solid with a quick 1-2-3 opening frame. He threw 60 pitches and allowed four hits over five innings.

"I definitely feel like I got what I wanted out of this outing for sure," Shoemaker said.

Bo Bichette belted a no-doubt, two-run homer in the early going and Rowdy Tellez later hit a three-run shot to the opposite field.

"Everybody has come here focused, ready to go, ready to get the season going," Bichette said. "There's a lot of optimism in this clubhouse. A lot of confidence. We're just excited to get going."

There was some expected rust on the field at times.

Riley Adams flubbed a routine fly ball in right field, although it's worth noting he's usually a catcher. It's quite possible he was plugged in to the outfield position as the Blue Jays remain shorthanded.

Players have been working out in two groups this week and manager Charlie Montoyo has said there are about 46 players on hand in all.

Another 12 players remain in Florida but are expected to arrive sometime this week. A reported single positive COVID-19 test is apparently the reason, although the team has not confirmed it. 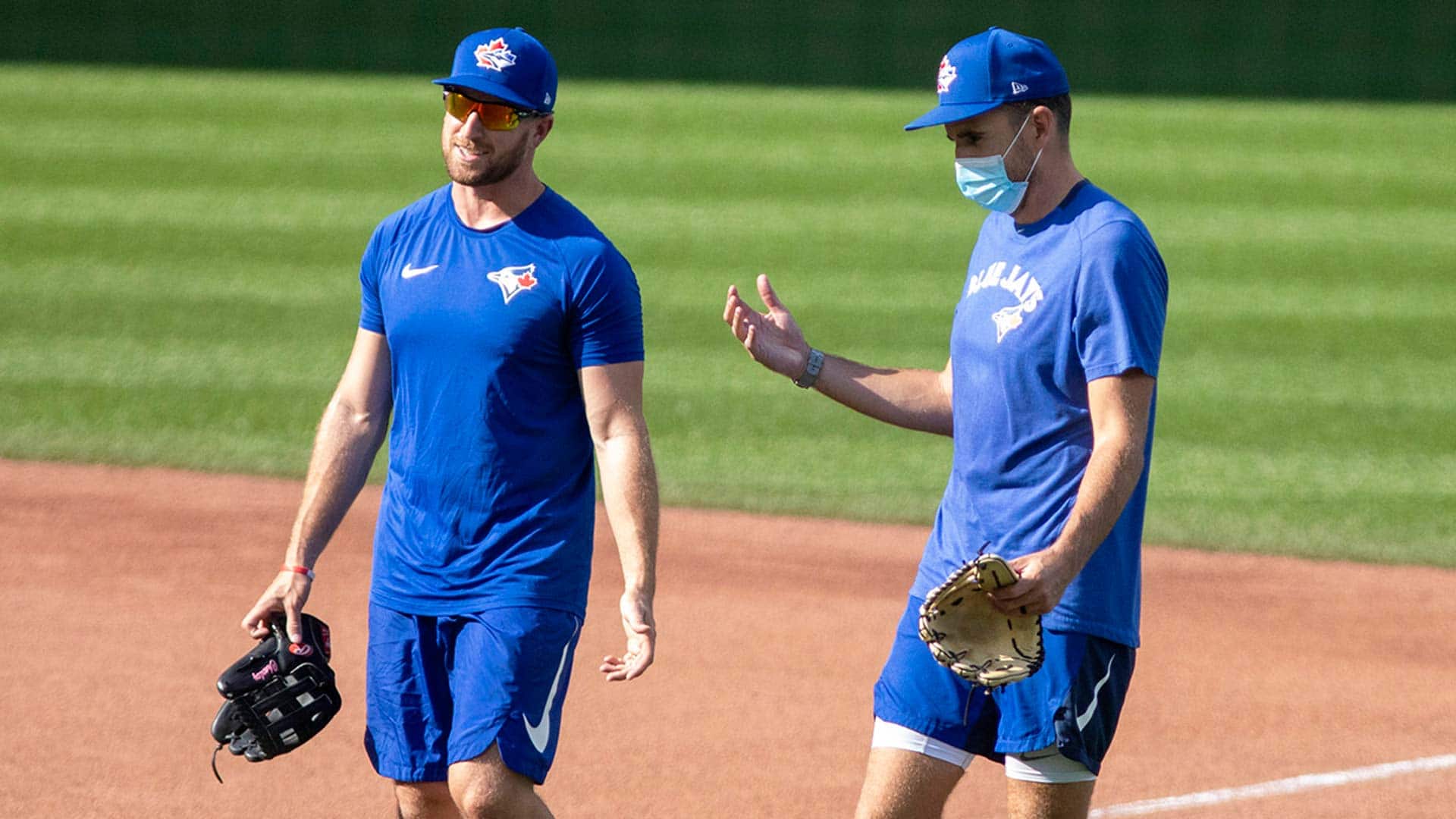 Blue Jays back on home field ahead of uncertain season

8 months ago
1:58
Toronto Blue Jays return to their home field at the Rogers Centre to resume training and adjust to their new reality ahead of MLB's shortened season. 1:58

Montoyo did confirm Thursday that fifth overall draft pick Austin Martin would be added to the 60-man player pool. Martin, whose signing was announced by the team Wednesday, was expected to arrive later this week.

"Just like the other players, I'm looking forward to seeing him play and see what he can do," Montoyo said on a conference call.

"When we got him, I was really excited," Montoyo said. "So I'm looking forward to seeing him play, take BP, catch, [take] ground balls and do everything. It seems like he's a really exciting player."

Players seemed to be distancing in the dugout on Thursday, with many leaning on the padded railing to watch the action. High-fives were replaced with elbow touches, slaps on the back and occasional fist bumps.

Another intrasquad game was planned for Friday. The Blue Jays will open the regular season July 24 at Tampa Bay. 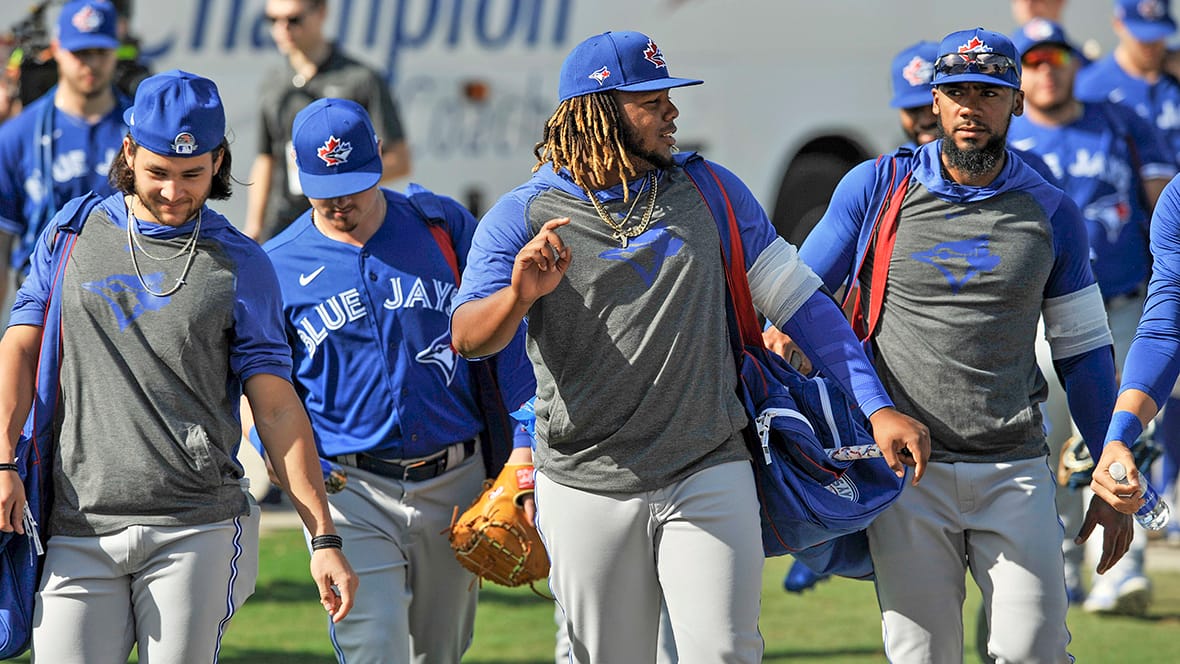 Toronto Blue Jays are back in town, ready to play ball

8 months ago
1:35
CBC Sports' Devin Heroux breaks down the Toronto Blue Jays return to Canada, and how the team and league plans on proceeding ahead of tentative Opening Day. 1:35
CBC's Journalistic Standards and Practices|About CBC Sports