Cliff Pennington drove in the tiebreaking run with a sacrifice fly in the ninth inning and the Los Angeles Angels beat the Toronto Blue Jays 6-5 on Saturday. 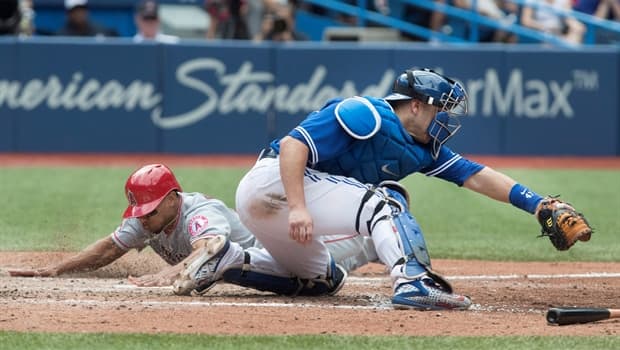 Troy Scribner's major league debut was already done by the time the nerves set in. When they did, it was because his first shot at a victory was on the line.

Scribner (1-0) pitched three innings, Cliff Pennington drove in the tiebreaking run with a sacrifice fly in the ninth and the Los Angeles Angels rallied to beat the Toronto Blue Jays 6-5 on Saturday.

Los Angeles won for the 13th time in its past 17 games at Rogers Centre.

The blown save was Osuna's fifth of the season, three of which came before April 28.

"One of those days," Blue Jays manager John Gibbons said. "You don't see too often. Got to move on."

Scribner had been in line for the loss after giving up Miguel Montero's tiebreaking two-run homer in the sixth. Darwin Barney followed with a single but Scribner retired the next seven in a row.

"He gave us three innings that we really needed," manager Mike Scioscia said. "Everybody you talk to say he's got great make-up, he's aggressive, all the things you're looking for in a young pitcher. He bounced back after the home run."

Mostly calm on the mound, Scribner said the stress kicked as he watched Bud Norris finish for his 16th save in 18 chances, putting runners at first and second before getting Jose Bautista to ground into a double play.

"When we went ahead I was like 'Wow, this might be my win right here,"' Scribner said. "I got nervous then because I was like 'Oh man.' We got into a little trouble in the last inning but we pulled it out. It was awesome."

"I felt good today, I felt like my fastball was working well," Liriano said. "My location was great. I made a couple of mistake here and there but I felt like I pitched pretty well."

All the scoring off Liriano came in the sixth, when the Angels rallied from a 3-0 deficit. Mike Trout drove in the first run and Andrelton Simmons hit a two-out, two-run single.

Toronto answered in the bottom half when Miguel Montero hit a two-run homer off Scribner, his first since joining the Blue Jays earlier this month.

Toronto took a 1-0 lead in the fourth when Josh Donaldson scored on Simmons' throwing error after advancing to third on a fly ball. The Blue Jays added two more against Keynan Middleton in the fifth on back-to-back doubles by Darwin Barney and Ryan Goins.

Making his first start of the season after 36 relief appearances, Angels right-hander Yusmeiro Petit allowed one run and three hits in four innings. Petit walked none and struck out five.

Angels slugger Albert Pujols went 0 for 3 with a walk and is hitless in 24 at bats. Scioscia said he wasn't convinced Pujols needed a day off to rest and clear his head.

"It seems like he's just missing some pitches but he feels strong, he feels like he's starting to put better swings on the ball," Scioscia said. "Don't think he's tired."