In what turned into a three hour and 20 minute thriller, Canada found a way defeat Spain 2-1 in 10 innings to stay alive at the Little League World Series in Williamsport, Pa., on Saturday.

WILLIAMSPORT, Pa., — In what turned into a three hour and 20 minute thriller, Canada found a way defeat Spain 2-1 in 10 innings Saturday night to stay alive at the Little League World Series.

With runners on first and second and one out in the bottom of the 10th, Joey Marino, the coach's son, stepped up to the plate. Marino was given the green light to swing with the count at three balls and one strike and he delivered a scorching single up the middle of the field.

Nate Colina came speeding around third base and sprinted home for the victory. 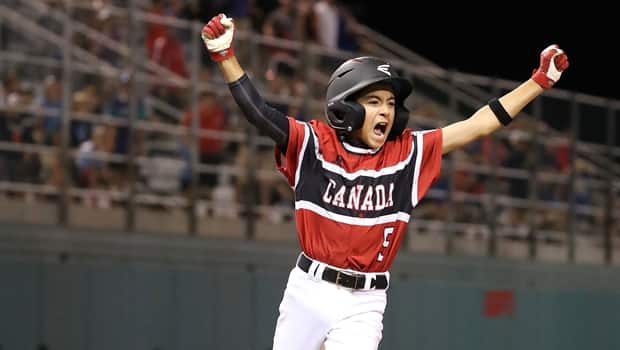 2 years agoVideo
2:45
Joey Marino supplied the heroics for Canada in a must win game against Spain with a walk-off single in the 10th to win 2-1. 2:45

The Canadians exploded out of the dugout and onto the field, celebrating in a sea of red and white as parents and fans roared in the crowd.

"He gave me a pitch to drive and I hit it hard," Joey said. "I didn't think Nate was going to score. I thought the bases were going to be loaded. But this is crazy. That was fun."

During the post-game press conference, father and son sat side-by-side — soaking up the baseball glory together after the extra-inning win.

Coach Mike Marino got emotional when he talked about his son delivering the game-winning hit. "It doesn't get much better," Marino said. "It's really, really good."

It was a defensive struggle filled with great plays throughout the night. Canada scored the first run of the game in the first inning and seemed to be in control.

Canadian starting pitcher Jordan Jaramillo was sensational early in the game, striking out four of the first six Spanish batters he faced. He left the mound in the 4th inning having thrown 54 pitches and striking out six batters.

"I didn't feel much pressure. Just going out there and playing baseball and having fun," he said after the game.

It was an idyllic summer night for baseball in Williamsport, with a light breeze sweeping around the ballpark as the players took to the lush green grass. A crowd of 7,020 onlookers clapped, danced and cheered throughout the game. The Canadian cheering section was boisterous throughout, delighted by their team's play.

With Spain down to their last three outs of the game in the top of the 6th inning and trailing Canada 1-0, the Europe-Africa representatives hit a home run to tie the game in dramatic fashion.

Spain’s manager getting emotional, fighting back tears as he talks about this loss to Canada. <br><br>“This was the best game I’ve ever been a part of thanks to those 13 boys who fought tonight” <a href="https://t.co/CBNBPAnRNC">pic.twitter.com/CBNBPAnRNC</a>

But like so many times in the past, the Canadian team from Whalley, B.C. showed poise, resilience and found a way to win.

"That was a fantastic game. It's up there as one of the best I've been part of," Marino said.

Taking a much needed break

Canada now gets Sunday off to rest and relax before their next game on Monday night at 6 p.m. ET against either South Korea or Mexico.

It's another must-win game for Canada if they hope to keep their baseball dreams alive.

The coach says the day of rest will be nice after the drama and excitement of Saturday night's extra-inning victory.

"We're going to enjoy this one and take some time before getting ready for the next one," Marino said. "This win feels good."