Vladimir Guerrero Jr., considered the future of the rebuilding Toronto Blue Jays, says making his major-league debut in the country in which he was born is the perfect honour for his father, a former Montreal Expo and Hall of Famer.

Vladimir Guerrero Jr. walked to the front of the Rogers Centre interview room, pulled out his chair, took his seat and stoically waited for his press conference to begin.

Baseball's top prospect wasn't the least bit fazed by the few dozen reporters — or the seven TV cameras — staring back at him.

After all, he's used to all the attention. He's well aware of the lofty expectations surrounding his major-league debut and doesn't seem to mind any of it.

"I'm just going to come here and play hard, give my 100 per cent to help the team win," Guerrero said through a translator Friday in a pre-game news conference. "Whatever happens, happens."

The Blue Jays announced Wednesday the 20-year-old third baseman would be called up from triple-A Buffalo for Friday's game against the visiting Oakland Athletics. Toronto optioned infielder Richard Urena to Buffalo to make room on its roster. 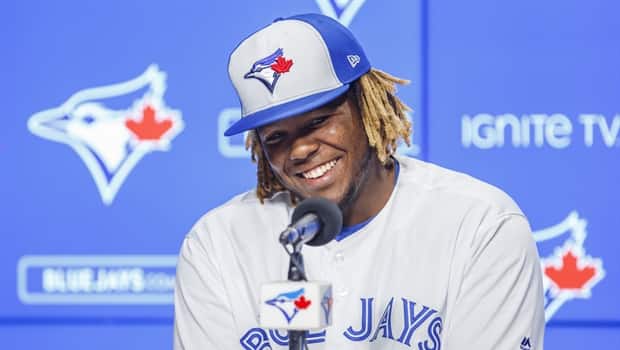 Guerrero Jr. speaks to media ahead of Blue Jays debut

2 years ago
19:26
The 20-year-old phenom will bat fifth and play third base when he takes the field on Friday against Oakland. 19:26

Guerrero, who started third base and batted fifth on Friday, was 1 for 4 with a ninth-inning double in Toronto's 4-2 walk-off win. He received a standing ovation during each of his at-bats and a thunderous "Let's go Vladdy" chant boomed from the crowd of 28,688 as he stepped to the plate for the first time in the second inning.

Even his outs were noteworthy. He hit fly balls 336 and 368 feet away, and his second-inning grounder was the hardest hit ball of the game at an exit velocity of 106.8 miles per hour.

Prior to the game, Guerrero Jr. said he would approach his MLB debut like any other game.

"I've been talking to my teammates and they say it's all the same, to play in the big leagues it's the same game," Guerrero said. "So I'm trying to control my emotions that way and if I do that I'm going to be OK."

While Guerrero was calm and collected throughout his news conference, Blue Jays GM Ross Atkins couldn't hide his excitement.

He smiled from ear to ear at the podium, calling Guerrero's debut "an exceptional day" for the organization. 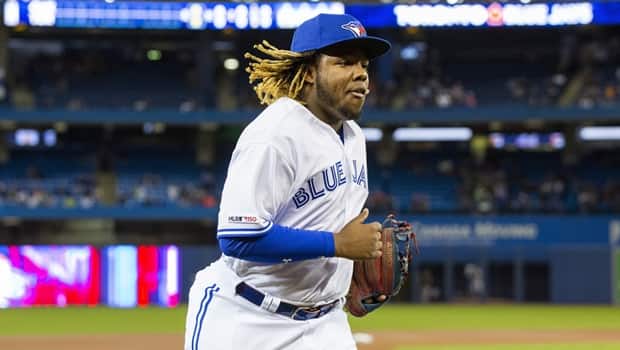 2 years ago
3:10
Jamie Strashin breaks down the impact Vladimir Guerrero Jr. could have on the Blue Jays and Major League Baseball. 3:10

"This is like nothing I've ever seen," Atkins said. "I've seen a lot of great players transition and I've never seen anything quite like this."

Guerrero said he did that to honour his dad.

"Since I was a kid, I was running around with my dad in the clubhouse in Montreal," Guerrero said. "I just wanted to bring that back today."

Guerrero, who was born in Montreal and raised in the Dominican Republic, said he was "very happy, very proud" to make his debut in Canada.

He's already had some success in baseball games north of the border, hitting a walk-off homer in a pre-season contest in Montreal in 2018.

Atkins said Guerrero's connection to the country makes his story that much more special.

"We have a Canadian-born, Dominican baseball player, son of a Hall of Famer that is coming into Canada to play for this great city and country," he said. "It's such a good baseball story and he's so aware of it.

"He's more aware than most of our young players of what it means to play for a city and a country. ... He understands the magnitude of it."

"I don't know if it's because he grew up in a clubhouse, maybe it makes him more relaxed. But he really is relaxed," he said. "That's pretty good. That's special to be like that."

Guerrero smiled when asked about how he learned he was going to the big leagues — via a joke from Buffalo manager Bobby Meacham.

Meacham called Guerrero into his office Wednesday and told him he had to work on his defence with the triple-A team. When Guerrero said he understood, Meacham responded there was a problem: he wouldn't be around to help him because Guerrero would be in Toronto instead.

The young star also cracked a smile when asked about his grandmother, Altagracia, who has accompanied him on the stops of his minor-league journey, cooking his meals and taking care of him along the way.

When do you think the Toronto <a href="https://twitter.com/BlueJays?ref_src=twsrc%5Etfw">@BlueJays</a> will be playoff contenders?

"Today we couldn't cook because we don't have an apartment yet, we're still in a hotel," Guerrero said, prompting laughter from reporters.

Guerrero signed a $3.9-million US deal with the Blue Jays as a 16-year-old international free agent in 2015 and has proven his dominance at the plate at every minor-league level. He mashed double-A pitching in 2018, batting a whopping .402 through 61 games, then continued that mastery with a .336 batting average in 30 games with Buffalo.

Guerrero, whose spring training was cut short due to an oblique injury, began the season in the minor leagues and batted .367 with a 1.124 OPS in eight games at Buffalo before his MLB debut.

Asked what the celebration would be like in his native Dominican Republic for his long-awaited debut, Guerrero he said he didn't know.

"They haven't seen me play," he said. "But maybe after the game there's going to be a big party."

Guerrero Jr. is just the first of Toronto's top prospects to make his debut this year, with the likes of Bo Bichette, Cavan Biggio and top pitching prospect Nate Pearson seemingly a year or two away.

If all goes according to plan, and these prospects fulfill their promise, the Jays could emerge quicker than most pundits predict, according to Toronto right-fielder Randal Grichuk, recently signed to the team for a five-year, $52-million US contract.

"They have a lot of good, young talented players that are coming up. They have the financial ability to sign some pieces if they feel like we need a piece here or there," Grichuk told CBC Sports. "And, we want to win. We are dedicated to winning. So, if you put all that together over the next five years, that screams good runs deep into the playoffs and a chance to win it all. Definitely, something I wanted to be a part of."