How a group of teenagers is fighting for alcohol-free spaces in Prince Albert, Sask.

‘You don’t have to look very far to see that alcohol is a struggle for us.’ Chris Dart

When teenagers Lynden Howlett-Sam and Camryn Corrigal took a look around their hometown of Prince Albert, Sask., they didn’t like what they saw.

“You don’t have to look very far to see that alcohol is a struggle for us,” says Howlett-Sam.

“You look around our town and you see that there are more liquor stores and...bars than there is anything for kids to do. And that’s why alcohol has become a social thing for teenagers, and sometimes even younger kids.”

Sober House: A Sign of Change in Cree Nation is a new short documentary that follows a group of students from Prince Albert’s Wesmor Community High School — including Howlett-Sam and Corrigal — as they try to start a Sober House program in Prince Albert.

A Sober House is exactly what it sounds like: a house where people don’t drink and where alcohol isn’t allowed. Community members show that their home is a Sober House with a sign on the door or window. The idea was first proposed by Cree elder, author and lawyer Harold R. Johnson in his book Firewater: How Alcohol is Killing My People (and Yours).

The pair say Sober Houses are important for a lot of reasons. They allow kids and teens to be in a safe, alcohol-free place when the adults around them might be drinking. They also let people in recovery know there’s a alcohol-free place for them to find friends and socialize.

“When people come out of alcohol treatment centres, they go back to their communities and they have no support,” says Howlett-Sam. “Their family and friends will be drinking and it’s easy to get sucked back into the same routine of drinking and partying.” 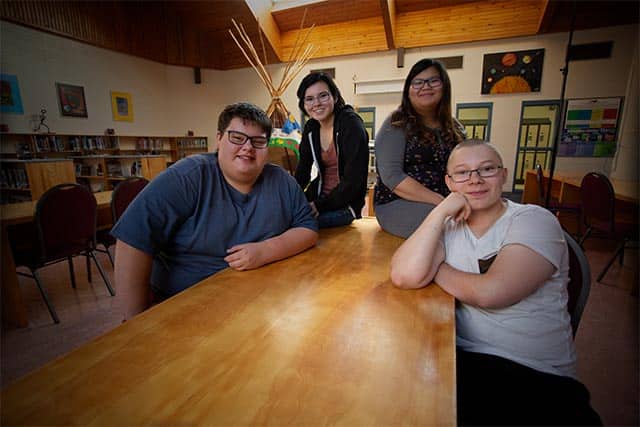 “That’s why we’re bringing the Sober House project to communities [where], once you get out [treatment, there are] places where you can go and talk,”  adds Corrigal. “ Instead of going out to drink... you need a place where you can build new habits of sobriety and do fun things like talking, having tea, playing board games.”

Since the documentary finished shooting, the group has visited other Saskatchewan communities to explain the Sober House idea to other young people and community leaders.

“Everyone was so moved. There were people crying,” Howlett-Sam says, describing a presentation he gave in the town of La Ronge. “As they were leaving out the doors, they were taking Sober House signs and our package. They’re saying that they support us and that they really think it should be in La Ronge and other communities.”

Howlett-Sam was invited back to La Ronge, where he presented in front of a larger group, alongside Harold R. Johnson.

Eventually, Howlett-Sam and Corrigal would like to see the Sober House program expanded across the province, with greater involvement from community elders and even some sort of Sober House community centre.

For now, though, the pair will  keep spreading their message to communities across Saskatchewan.

“I want to see communities start making a change,” says Howlett-Sam. “Instead of making it easier and more acceptable to drink, make it harder for people to drink, but also [open] up new pathways to take instead of going down that path.