1,000 handmade skulls: The making of Four Faces of the Moon

Q & A: How Amanda Strong created the stunning stop-motion worlds of Four Faces of the Moon

Amanda Strong’s time-travelling, stop-motion animation documentary Four Faces of the Moon bears witness to t he mass slaughtering of bison and buffalo, the introduction of colonial land policies and the impact of these events on her family's story.

The Michif filmmaker joined us for a Q & A about the the process of making the film and the little-known history that informed it.

Q: What started your artistic journey?

Amanda: When my grandfather passed away [when I was] in high school, I just subconsciously grabbed one of his cameras — that started it. That's a big part of why there are cameras on my character's back in the film. 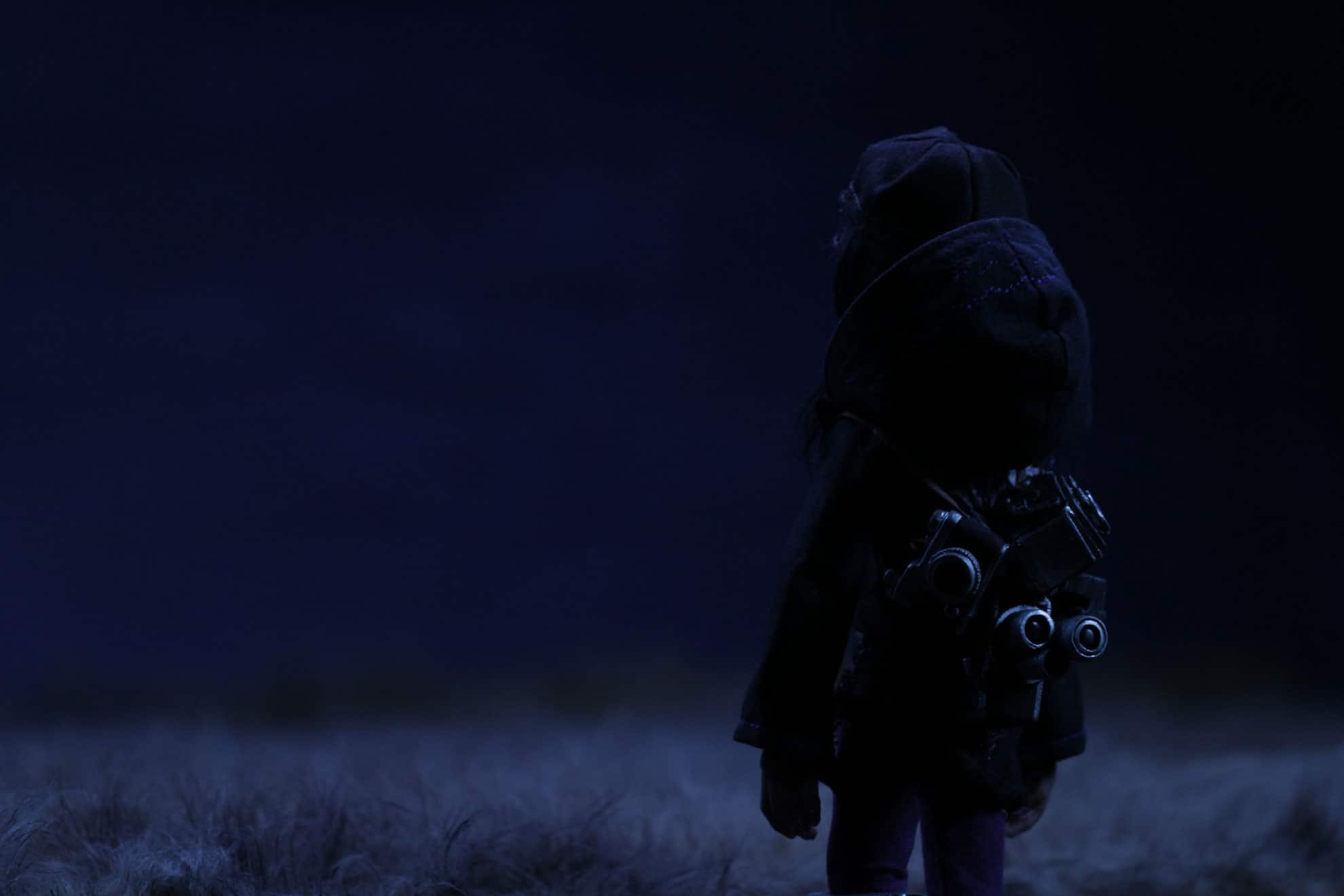 Q: How did you build the world you created?

Amanda: I worked very collaboratively with a team, so it wasn't just me building everything.

First, we had to figure out the scale — how big we wanted the puppets to be, which would inform the size of the environments, the sets and the props. The puppets were built with two different types of armatures, secured with different epoxies that held the the joints steady. Ball and socket armatures were custom made in the U.K. for the four main characters – my grandma, the little girl (myself) and the two animals. We used different techniques with foam and silicon to create the skin textures for hands, faces and the animals. Then we made miniature clothing out of lots of different fabrics and materials, and added eyes and sewed on hair.

For the sets, we tied down the puppets' feet so they could stand up. Everything else was built around that.

We used some natural materials, some furs and paint to weather things down. All kinds of different things came together to make the set come to life. 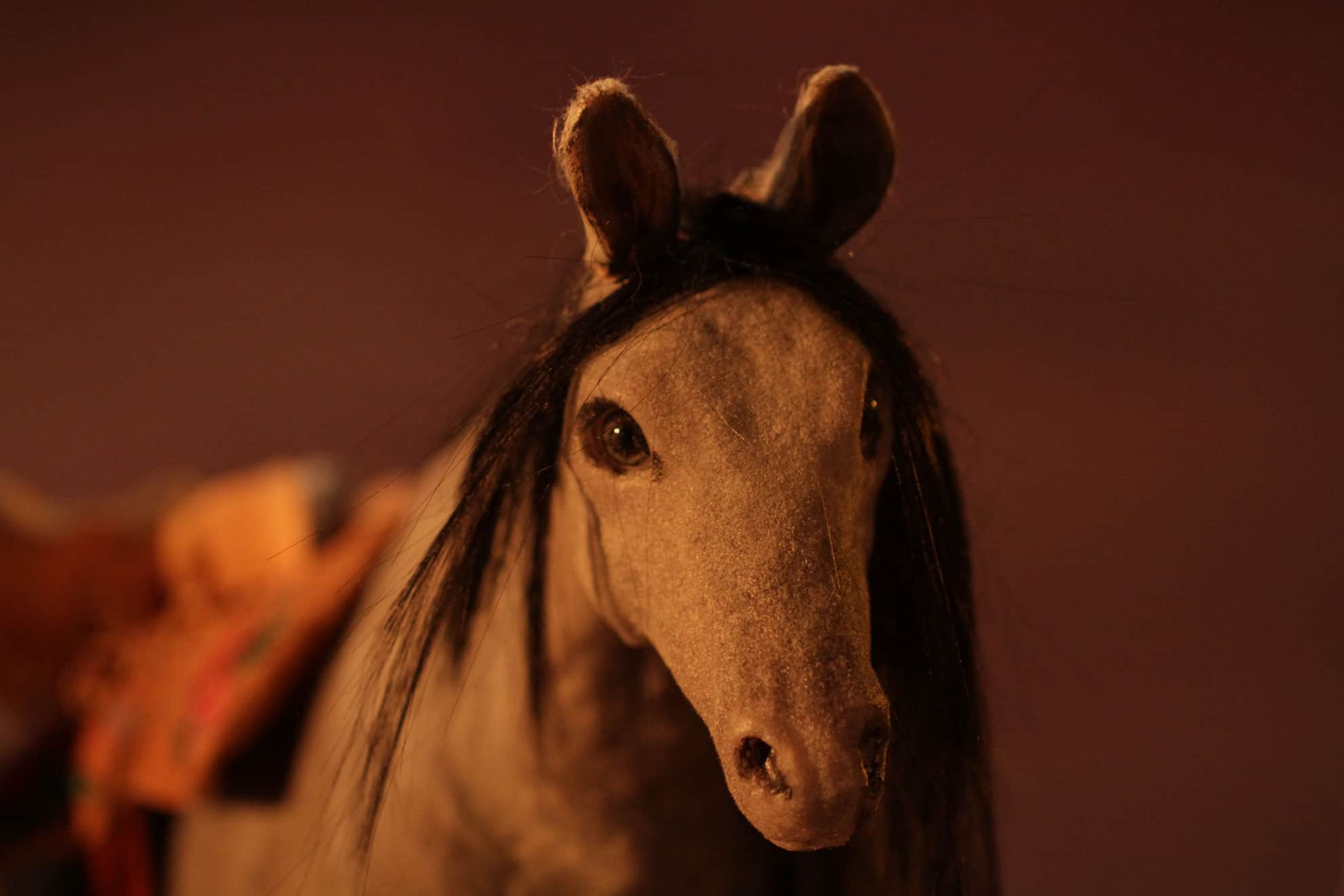 Q: How long did it take to make this film?

Amanda: It took about a year and half of production. From conception to when I started working on the film was probably 4 or 5 years — but that wasn't full time. It kind of happened in stages of research.

Q: How did you first hear about this story?

Amanda: When I first started the research with my grandmother, I didn't know a lot about the buffalo. Nor did I know that was going to make its way into the story.

"I really wanted people to feel that this was a physical thing that happened."

It was more in recent years that I learned about my family's tie to Gabriel Dumont, a very well-known Métis buffalo hunter. He was the godfather of my grandma's grandfather, Napoleon Bousquet.

As I learned about our connection to the buffalo, I started learning more about the genocide and the tactics [to eliminate Indigenous populations] that were used across the border [in the U.S.].

Seeing that iconic image —  a massive pile of bones and that guy standing on the top, like he's conquered something — as horrifying as that was, I knew right away that we were going to build it or make that. And we actually made it, it's not digital. 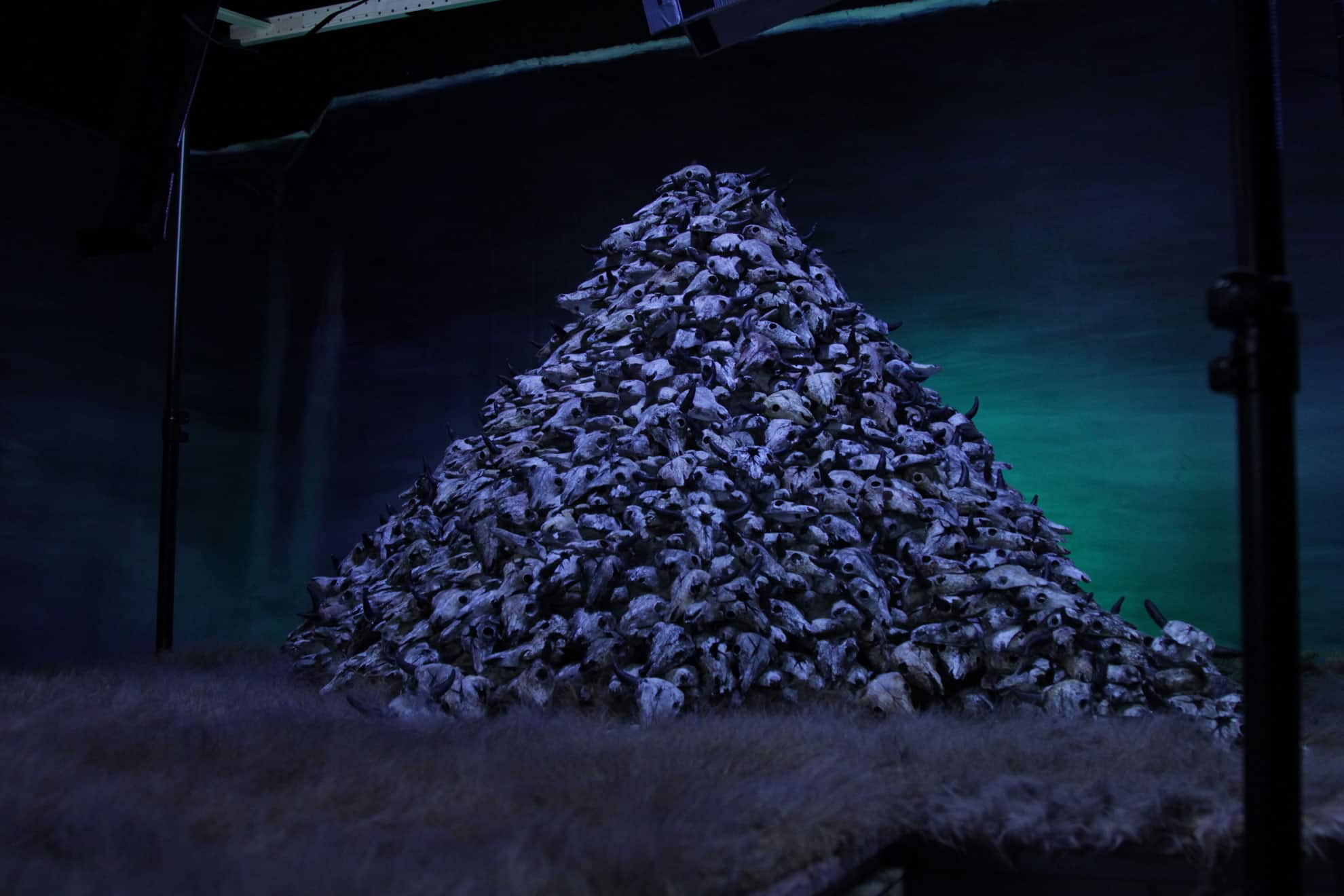 It's four-foot by three-foot mountain. We made the outer shell of it; that alone is 1000 handmade skulls. It's just three-quarters of the outer shell and it's not even to scale of the pile itself. It really makes you think about how many bones must have been there. And how horrifying that is.

Q: What was it about this history that made it important to physically build the set?

Amanda: I really wanted people to feel that this was a physical thing that happened. I thought that by physically making it as a team, it would have more of an impact than building it digitally. Q: How informed are you expecting the audience to be about this history before they watch the documentary?

Amanda: I don't expect many people to know all those stories, because there are many stories within this piece.

I chose not to be too literal about describing the stories, because for me it's a very poetic and personal journey. I want people to feel something when they watch it. 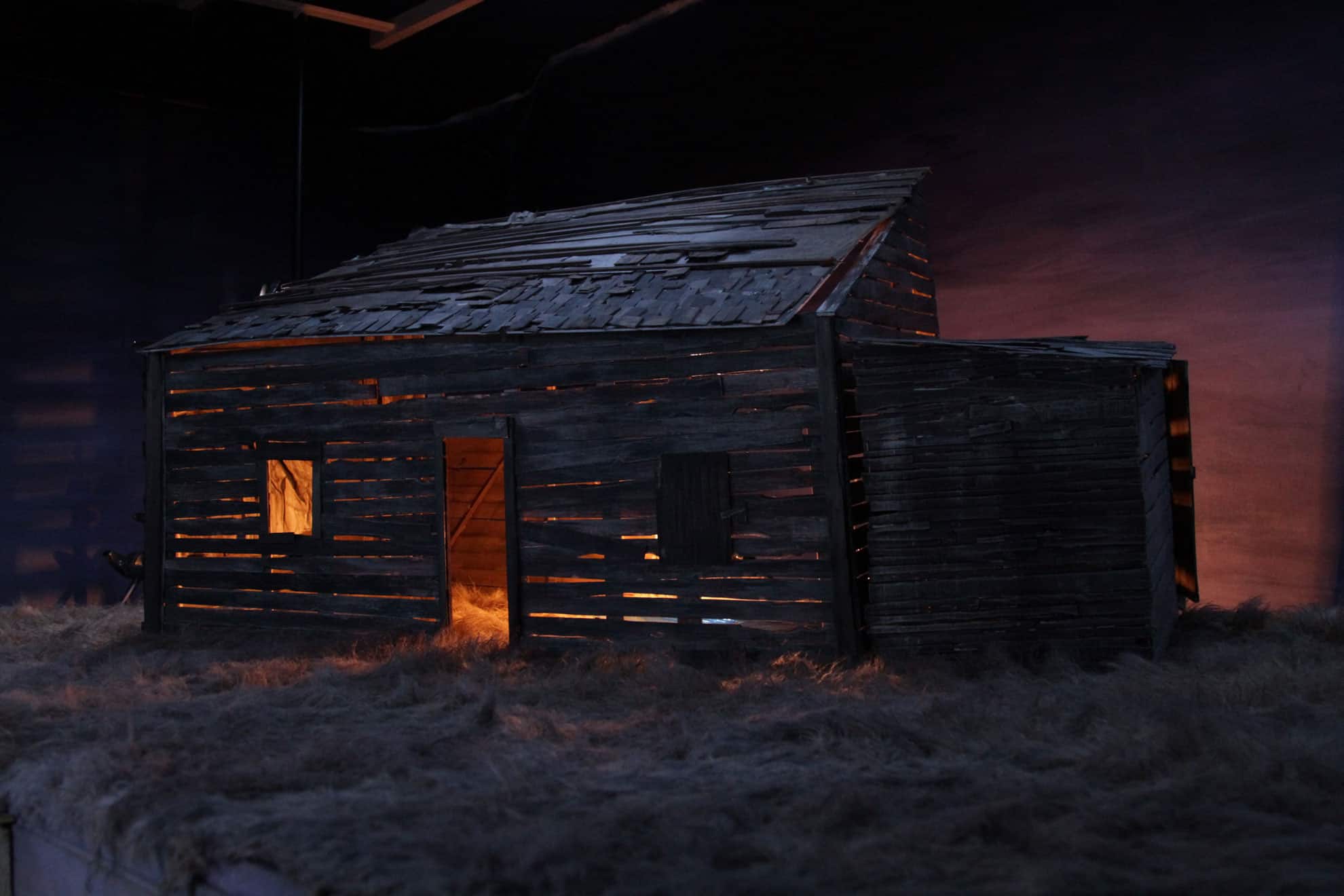 I didn't even learn about what happened to the buffalo in school, so I'm guessing most people in Canada or the States don't learn the depth of it: the devastating impact it had on Indigenous people or the first people here. They depended on the buffalo for hunting, eating, shelter, weapons, clothing. For everything.

[The buffalo slaughter] took their life source away. The intention was to starve the Indigenous people, First Nations people and Métis people. 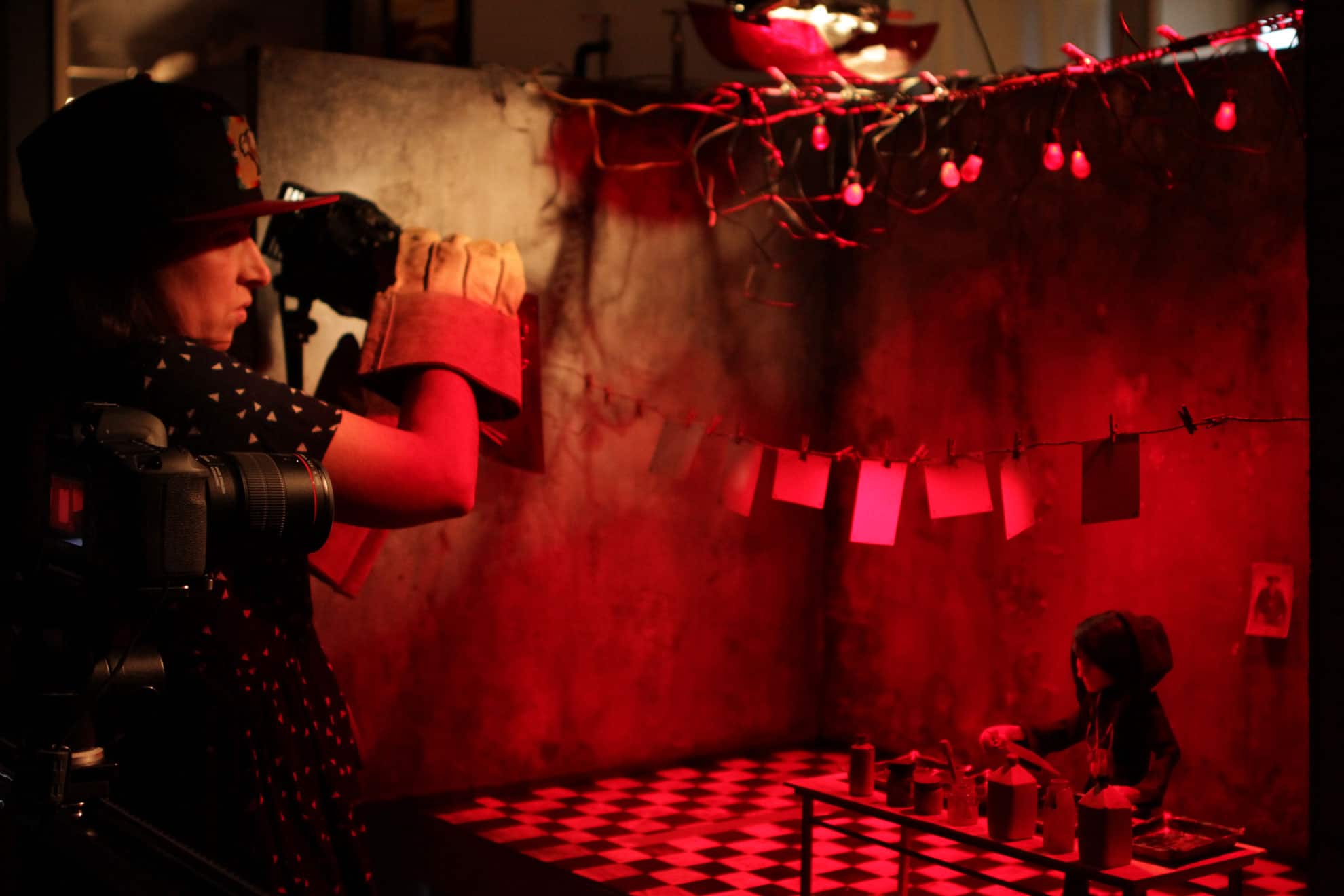 [Amanda's answers have been edited and condensed for clarity and length. All behind the scenes photos provided by Amanda Strong.]

In Four Faces of the Moon, we witness the impact and legacy of the railways, the slaughter of the buffalo and colonial land policies. This multi-layered approach to storytelling may leave you with more questions than answers: it is an invitation to look into your own understanding of history, legacy and the importance in knowing who you are and where you’re from.