300 people trapped. 4 hours. Pouring rain. The day I was kettled by police in Toronto.

Inside the kettle: why I made a film about a protest at the G20 Summit in Toronto Lucius Dechausay

I stood pinned against the brick wall of a McDonald’s in downtown Toronto, surrounded by hundreds of police officers outfitted in riot gear and brandishing weapons. Just minutes before, I had been walking around the intersection of Queen St. W. and Spadina Ave. — the  neighbourhood where I lived — taking photos and videos on the final day of the G20 summit.

It was June 27, 2010.  After weeks of hyper-security and an increased police presence, the city was beginning to feel like itself again. Patios overflowed with fans watching the World Cup. People were out walking their dogs. There were a few protests in the area, but they were small and scattered. The day before, a police car had been set ablaze in front of Steve’s Music, but apart from the store’s wilted sign and some charred concrete, things mostly seemed normal. That is, until they weren’t.

Now, I was one of approximately 300 people boxed in by the police, unable to leave and unsure about what what happening. Around me, people had been chanting “Peaceful protest! Peaceful protest!” But as the police moved closer, the shouting tapered out, replaced by an uneasy silence.

I had been to protests before, but the G20 Summit in Toronto was an entirely different beast. People showed up in huge numbers to support the environment, immigration, Indigenous issues, poverty and LGBTQ rights. Of course, many also came out to protest the summit itself — along with its billion-dollar security budget.

Security officers were flown in from across the country and blanketed the city. Protesters were told they could only congregate in a designated “free speech zone” that was nowhere near the summit. A 9.7 km-long steel fence was erected around the site of the summit to insulate  delegates from protesters’ messages and police threatened to arrest anyone found within five meters of that fence.

For many of us, especially within racialized communities, our interactions with the police occur without witnesses. The G20, however, was like a social experiment that shone a critical light on policing and protest and provided the general public (many of whom were caught up in it in some way) a window into how quickly these interactions can escalate to a dangerous place. That’s why I was there with my camera. It felt important to record this moment. 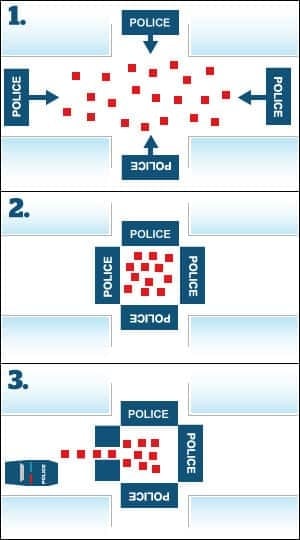 The basics of a kettling operation: Police corral people in a central area (panel 1) and surround the crowd (panel 2), allowing those inside to leave only at police discretion (panel 3). (CBC)

On my way home, I heard the rumbling sound of hundreds of riot officers marching towards me. They were pounding their batons against their shields in unison — that was the first indication of trouble.

Without warning, police descended from all sides, screaming “move!” and pushing people into the intersection that would eventually become our prison. We were surrounded on all sides. There was no way to leave the intersection.

I approached an officer about my detainment, telling him that I lived a few minutes away and was trying to get home. He gave no reply.

The only communication during our four-hour detainment was an officer informing us that we were all under arrest for conspiracy to commit mischief. Sit tight. Buses were on the way to take us to the detention centre.

As we stood in collective silence, waiting for more information, it began pouring rain. The temperature dropped. I stood a few feet from the line of police, shivering next to my girlfriend. Finally, the officers around us spoke. 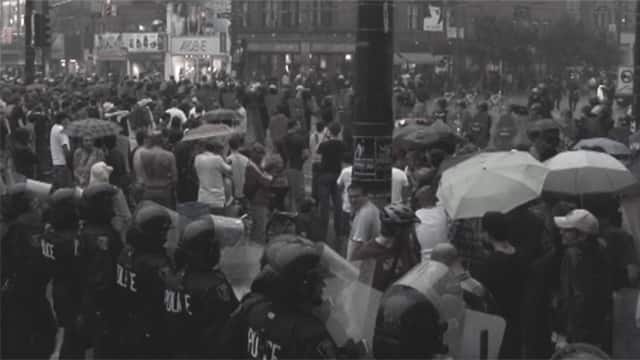 “If you’re really that cold, why don’t you put on the black clothes you’re hiding in your backpack?” an officer yelled, implying we were engaging in black bloc tactics.

“Don’t you know a naked farmer stays warmer than a clothed one?” another officer added.

Around 300 people were arrested that evening (a total of 1,118 people were arrested during the G20). They ranged from political organizers who had been surveilled by undercover officers to curious onlookers who were in the wrong place at the wrong time. Ultimately, the intent of the individual was irrelevant: yogis, shoppers and protestors were all characterized as terrorists and their arrests were indiscriminate and unjust. While we were detained that evening, we bonded with a cyclist who got caught enroute to his parked bicycle, a woman walking through the intersection with her dog, a confused elderly couple and a shaken reporter from the Globe and Mail.

I couldn’t help but notice the contrast between this quiet group of “protesters” and the aggressive police response. Trapped in an intersection I generally walk through freely, I knew this would be a turning point in my own life and in protest culture for us as Canadians.

What changed after the kettle?

Months later, I looked back through my footage from that day. The militarized police force, the violence, the criminalization of dissent — none of it looked like our city.

None of it resembled the ideals of the Charter of Rights and Freedoms in this country, but post-G20, much of the riot gear, weaponry and surveillance cameras still remain. This was not an isolated incident, this was an attack against the act of protest itself and a warning for those who dissent.

I created a short film about the experience: Kettle. It is the conversation between the police, the public and protesters that never occurred that day. In making the film, I realized that in these times where our freedom of thought, expression and peaceful assembly are undermined, it’s important to remember your rights.

The police will tell you that you have the right to remain silent. But you also have the right to remain loud. Following that evening, I filed a complaint with the Office of the Independent Police Review Director. I was very active in the G20 police tribunal, attending each day in an attempt to figure out what had happened. And I made this film, combining my footage with police radio, bodycam recordings and personal recollections in order to explore our personal notions of freedom, and how easily those freedoms can be taken away.

All images from the film Kettle. Watch it now.