It Does Have a Happy Ending Skip to main content

It Does Have a Happy Ending

When Robert Munsch first dreamed up The Paper Bag Princess, he had no idea what was coming.

In 1973, long before Robert Munsch was a world-renowned children's author, he and his wife, Ann Beeler, worked at a daycare in Coos Bay, Ore. At naptime, he often told the children stories about dragons.

But in his stories, Beeler pointed out, the prince always rescued the princess. 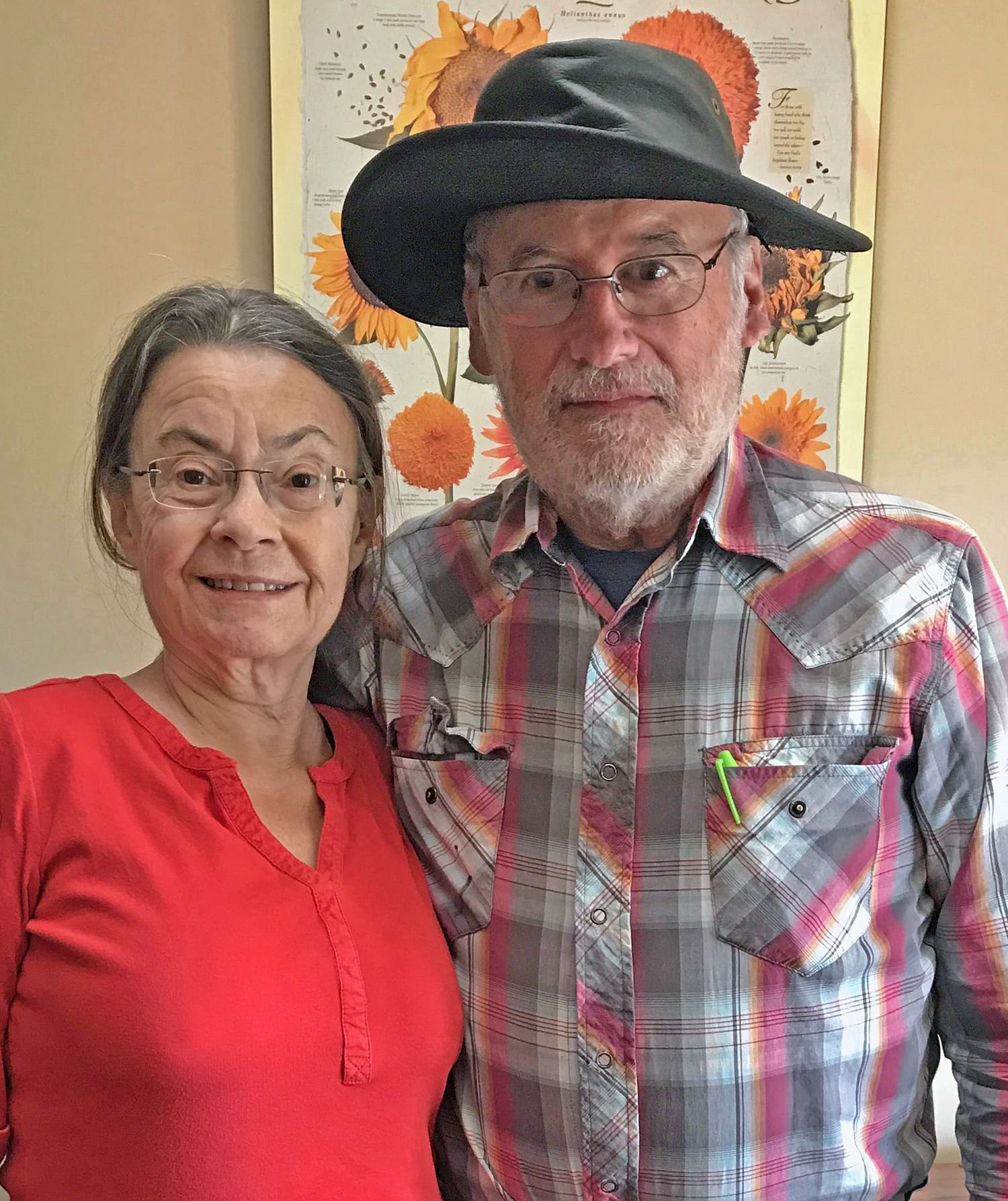 Robert Munsch with his wife, Ann, in their Guelph, Ont., home. (Alisa Siegel/CBC)

"[She told me], 'You may not have noticed, but in this town, princes are in very short supply. Most of the women in the daycare centre are single parents because their princes turned out to be bums,'" Munsch told The Sunday Edition.

On her suggestion, Munsch switched the story around.

It was to become The Paper Bag Princess — the book that launched Munsch's career, changed the face of children's literature in Canada, and inspired generations of young readers to think differently about independence and happy endings.

The book is about a princess named Elizabeth, who is supposed to marry a prince named Ronald.  A dragon kidnaps him and burns down her whole castle — including her clothes. So dressed in nothing but a paper bag, Elizabeth bravely sets out to rescue Ronald.

But after she saves him, Ronald criticizes her appearance. Elizabeth is having none of it. "You look like a real prince, but you are a bum," she replies. 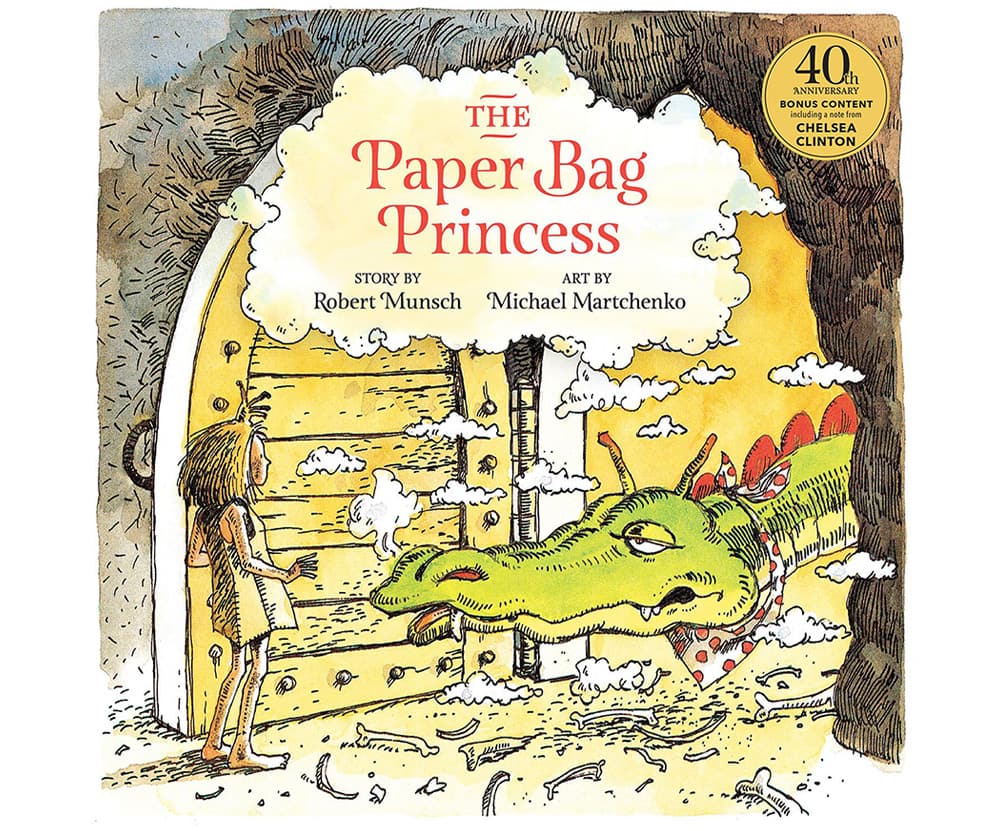 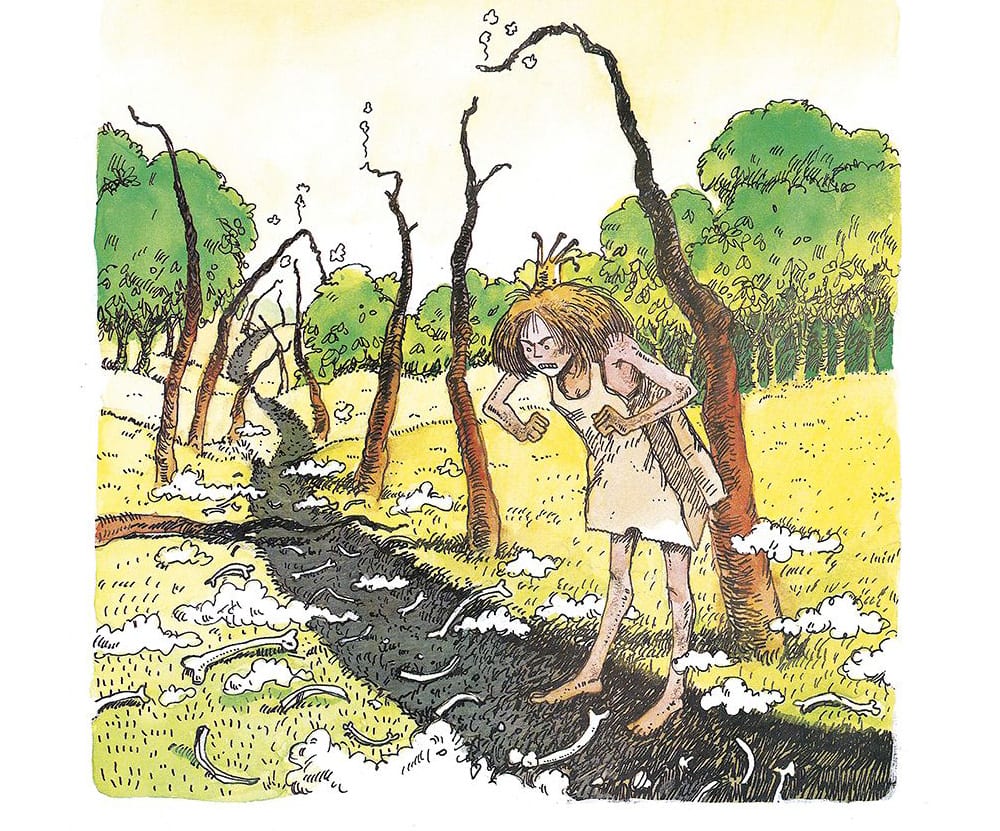 Princess Elizabeth decided to follow the dragon and get her prince back. (Annick Press) 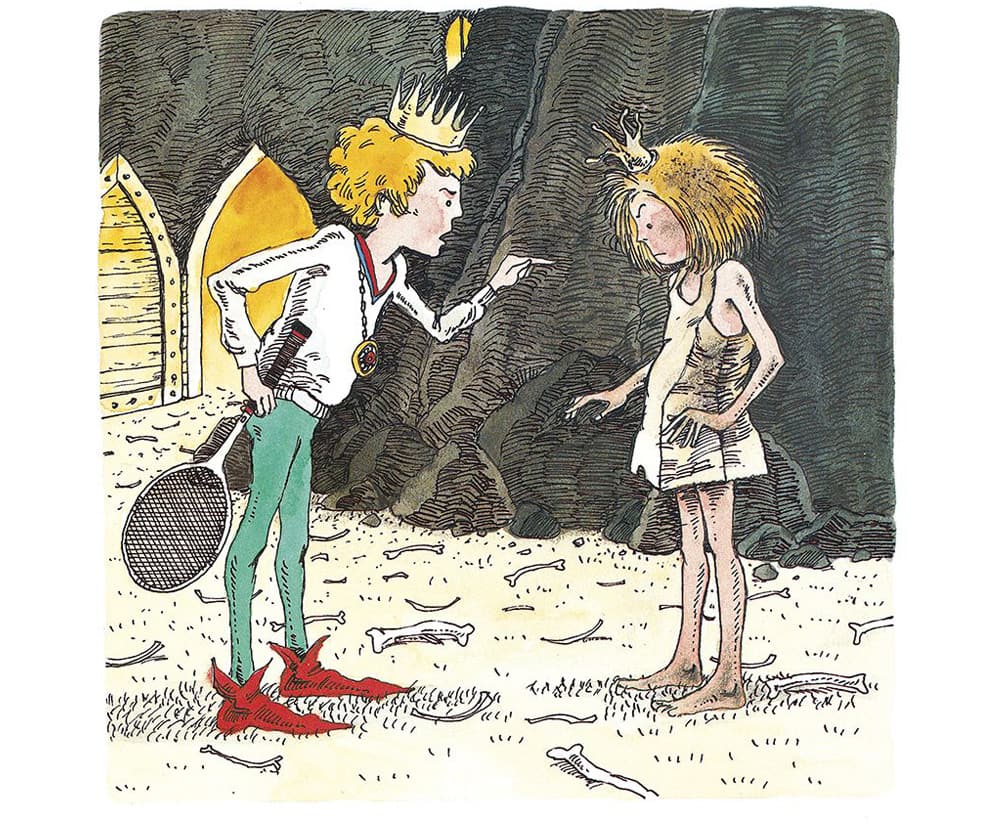 Prince Ronald and Princess Elizabeth in the defining exchange of the book. (Annick Press)

And in the famous final words of the book, they don't get married after all.

For many readers, the book was revolutionary. Renowned scholar Mary Beard calls it the book that made her a feminist. Chelsea Clinton read it to her young children every night for two years. Since it was first published in 1980 — 40 years ago next May — it has sold more than seven million copies worldwide.

Publisher Rick Wilks says it was a "game changer" for children's literature because it proved there was a big audience for books that challenged the status quo.

'This man has managed to remain a child'

When Munsch first dreamed the story up, he had no idea what was coming.

He sent stories to 10 different publishers. Only one replied.

Anne Millyard, the co-founder of Annick Press, remembers sitting under an apple tree in her backyard with Wilks, reading the mail on the day Munsch's envelope arrived. At the time, they were working out of her basement. 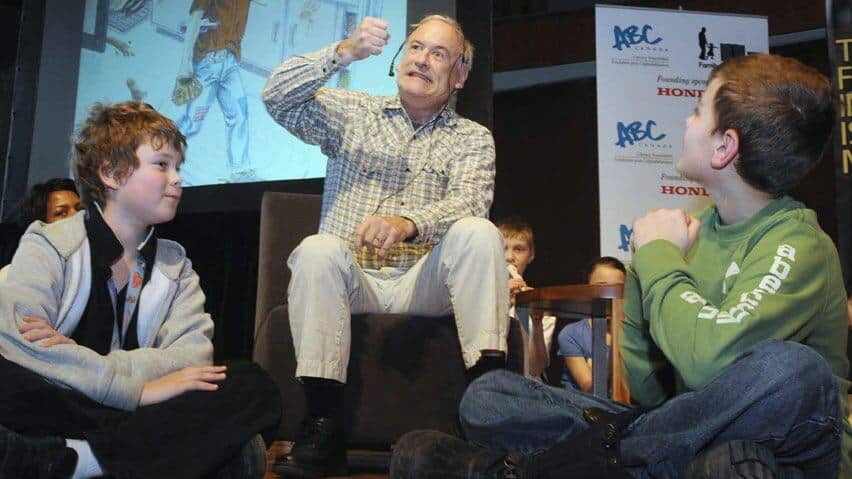 "It was a large envelope with very large, loopy handwriting, and it contained four stories, all handwritten," she said.

The fourth story was The Paper Bag Princess.

Millyard and Wilks looked at each other in disbelief.

"We said, 'This man has managed to remain a child. How very lucky and how very rare. We must publish all of these stories,'" said Millyard.

As he workshopped the story, Munsch searched for a model for the main character. He found her at a daycare at the University of Guelph, where he was working at the time. 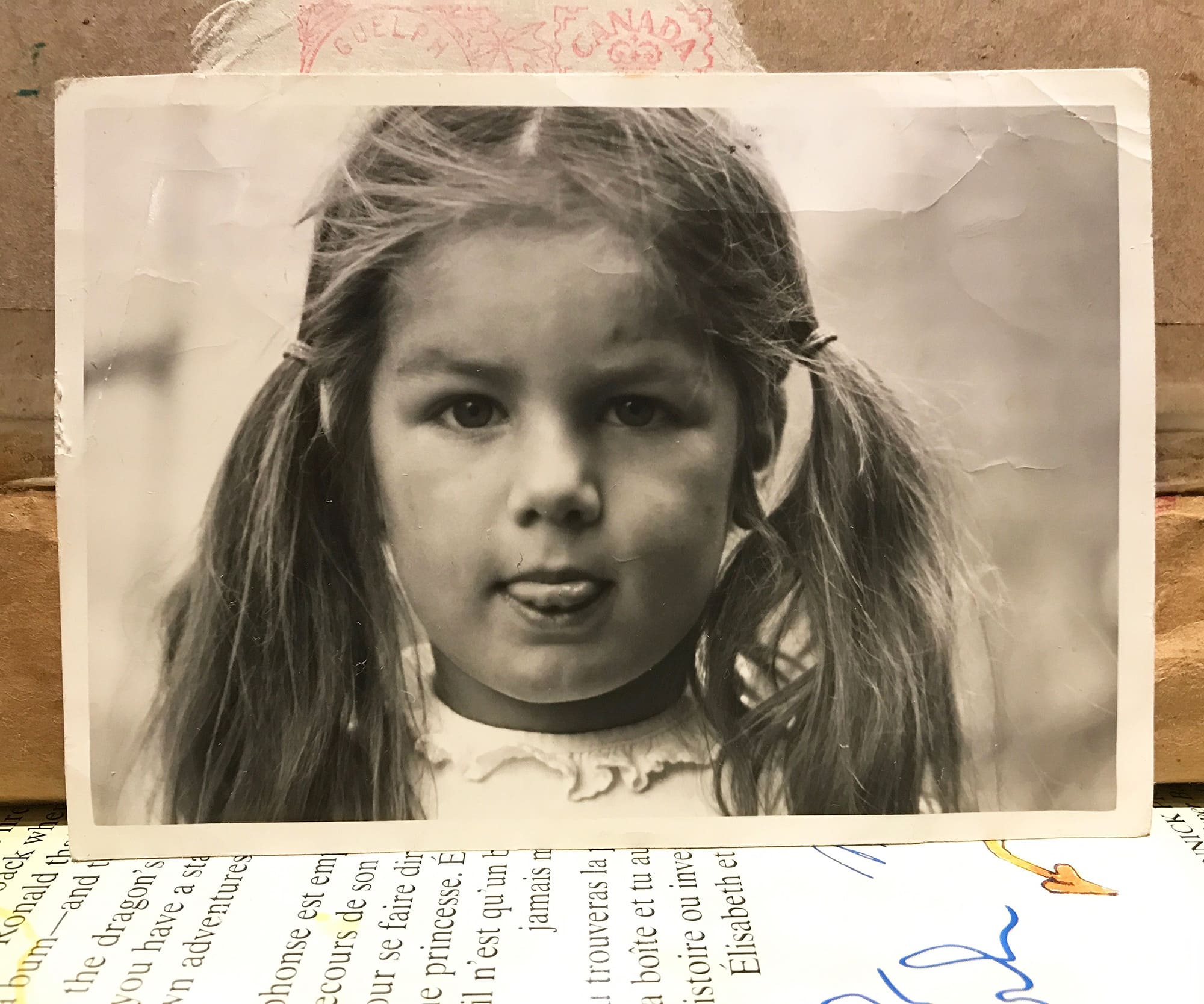 Elizabeth Ciaravella, then four, is the inspiration behind the book's lead character. (Alisa Siegel/CBC) 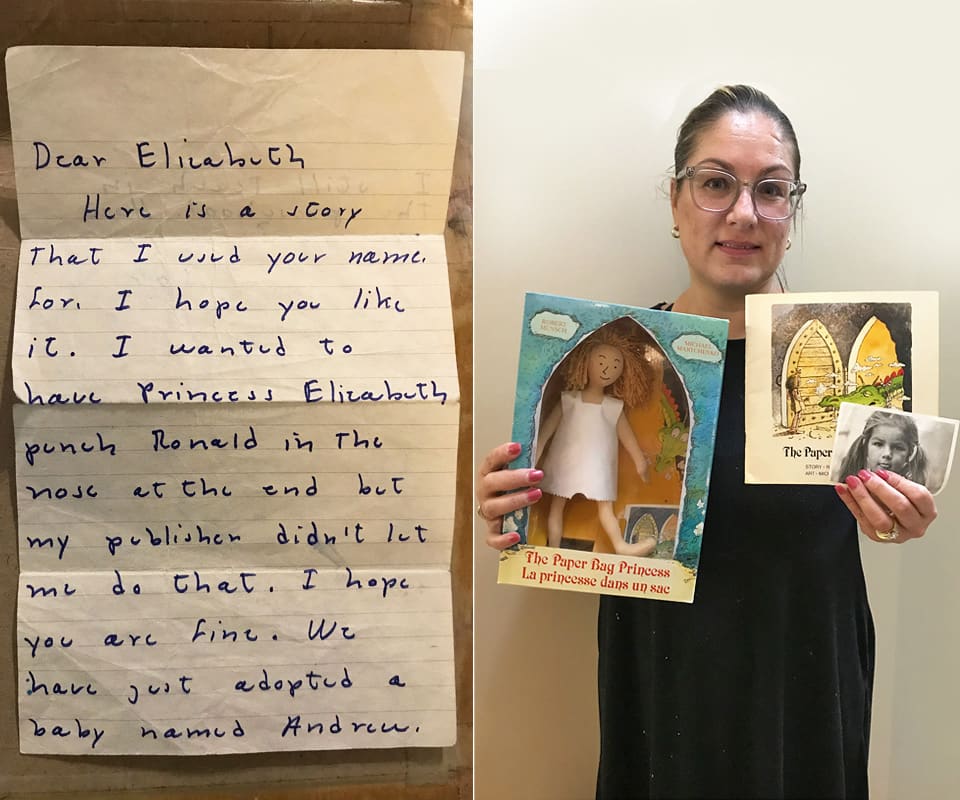 "Elizabeth came in and dropped her coat on the floor. She was four years old. I looked at her, and she looked at me. She said, 'Someone will pick it up,' … and I thought,'Bingo.'"

Elizabeth Ciaravella, now 46, said the character gave her "big shoes to fill." She loves her namesake for her feistiness and refusal to compromise on her values.

When the book was published, Munsch sent her a copy, accompanied by a note she still has.

"Dear Elizabeth, Here's a story that I used your name for. I hope you like it. I wanted to have Princess Elizabeth punch Ronald in the nose at the end, but my publisher didn't let me do that," it read.

Once they had the story, Munsch and the publishers set out in search of an illustrator. They found Michael Martchenko in an unlikely place: an art show for advertisers.

Martchenko had never illustrated a children's book before, and said he wasn't interested.

"Fortunately, the man had a six-year-old daughter who read the story and said, 'Dad, you're crazy ... You have to do it,'" said Millyard.

Michael Martchenko in his studio with original sketches for The Paper Bag Princess. (Alisa Siegel/CBC)

It was the beginning of a brilliant career for Martchenko, who went on to illustrate close to 100 children's books, many of them with Munsch.

"I really do love his stuff. It's crazy. And that's why we fit, because I'm a little weird myself," Martchenko said.

In the early '90s, two decades after the single mothers at his daycare inspired Munsch to tell a different kind of story, another single mother fell in love with the book.

"There was no such thing in my childhood as a paper bag princess who finally rescues her prince and then decides he's a bum.… That story was immediately one that I loved, and was, in my experience, more true to life," said former Green Party leader Elizabeth May.

"It wasn't helpful for me … to have been inculcated in that fake story of: The prince will rescue you and then you will live happily ever after. Those stories had a profound impact on my failed romantic trajectory," she said. 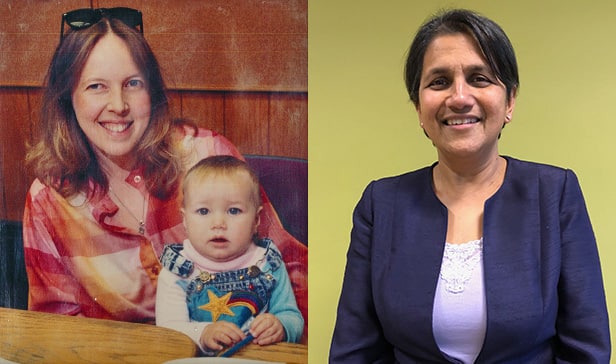 Elizabeth May, left, with her baby daughter in the early '90s. (Elizabeth May). At right, Manjusha Pawagi, an Ontario family court judge and children's author. (Alisa Siegel/CBC)

She and her young daughter both loved The Paper Bag Princess — May because of its feminist message, and her daughter because she was adventurous and self-reliant herself.

"I think it does change things in a society where there is another story," she said.

Ontario family court judge and children's author Manjusha Pawagi said when she discovered the book in her 20s, it taught her to be less scared of being alone.

"I was single. I was worried I'd never meet someone.… I think it made me braver, in a really joyful way. The message was, 'Don't settle,'" she said.

"This idea that girls should just be nice and put up with things, he explodes that — but into a million shards of light, rather than into something violent."

'It does have a happy ending'

Over the years, Munsch sometimes got letters from readers who wanted to know why the prince and princess didn't live happily ever after.

"I [wrote] back and said, 'It does have a happy ending.' That's the ending it's supposed to have." 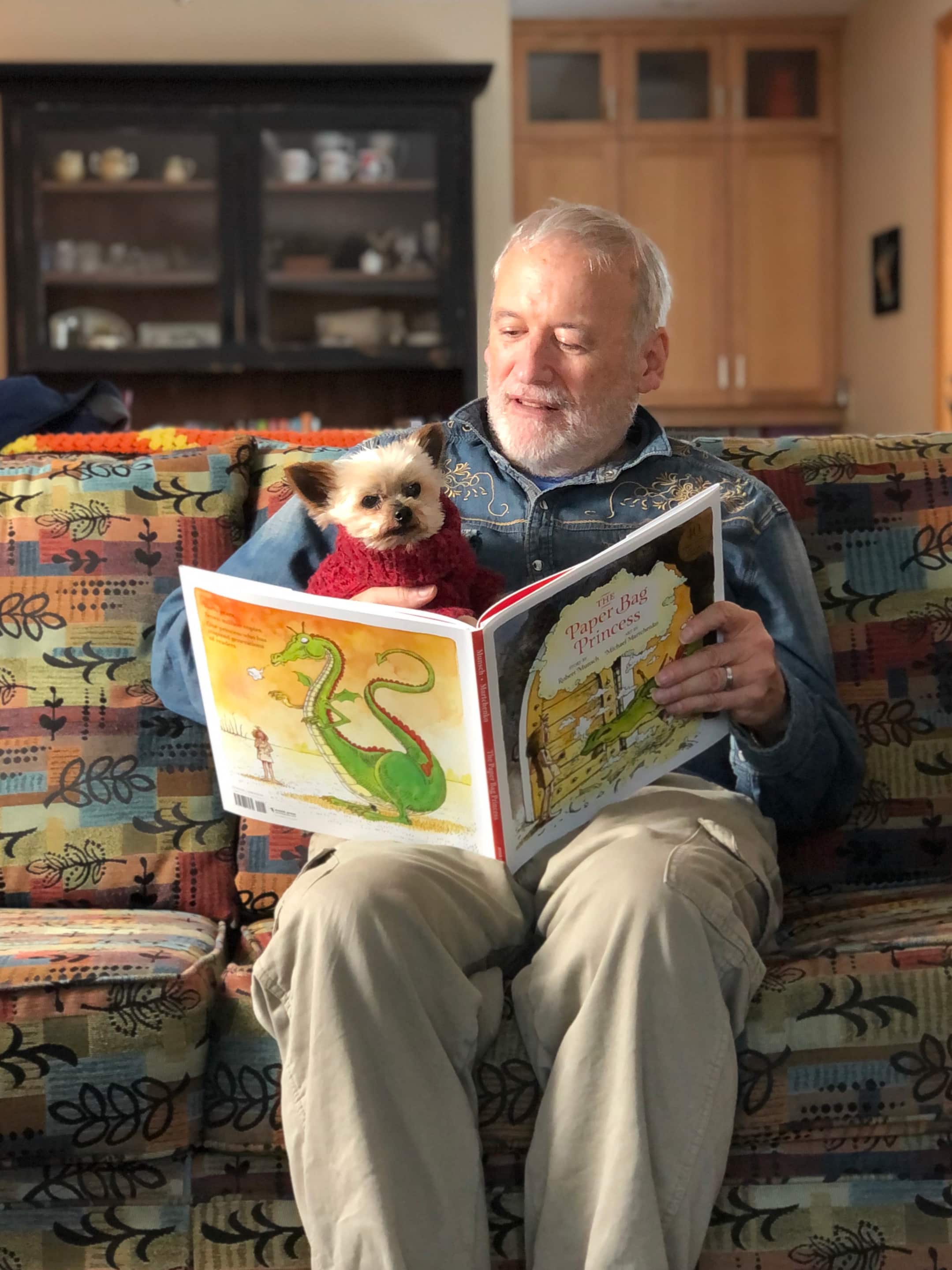 The Paper Bag Princess closes with 'the ending it's supposed to have,' Munsch says. (Annick Press)

The book ends with an illustration of Elizabeth leaping off into the sunset on her own.

Novelist Francesca Segal, who has been reading The Paper Bag Princess for almost 40 years, called that final image "beautiful."

"You just know that she is going to be fine … She's off into a golden future," she said.

The book has become a "personal Bible" for her.

"I think it's incredibly important to have these narratives … to just remind you that it's not acceptable to be spoken to with anything other than respect and love. And if you have just rescued somebody from a fire-breathing dragon, the first thing they should probably say is thank you," Segal said.

Audio excerpts of The Paper Bag Princess in the radio documentary, courtesy of Robert Munsch Enterprises and The Children’s Group, a division of Linus Entertainment Inc.