In Vancouver, businesses are saving Chinatown’s heritage through food

Chinatown has a rich history, but heritage preservation isn’t only about the buildings

When renowned restaurateur Tannis Ling was growing up in Vancouver, her parents would pack the kids into the car every weekend and drive to the city’s bustling Chinatown.

Parking was notoriously difficult, so her dad would drop off her mom at the butcher or market, then circle the area.

“It was in the ‘80s before T&T and all the Chinese malls in Richmond. This area was the only place you could get Asian groceries,” says Ling.

“I have really nice memories of eating buns in the car and drinking mango juice.”

Inspired in part by her mother’s cooking, she opened Bao Bei Chinese Brasserie in 2009, which instantly became one of the city’s culinary hotspots. 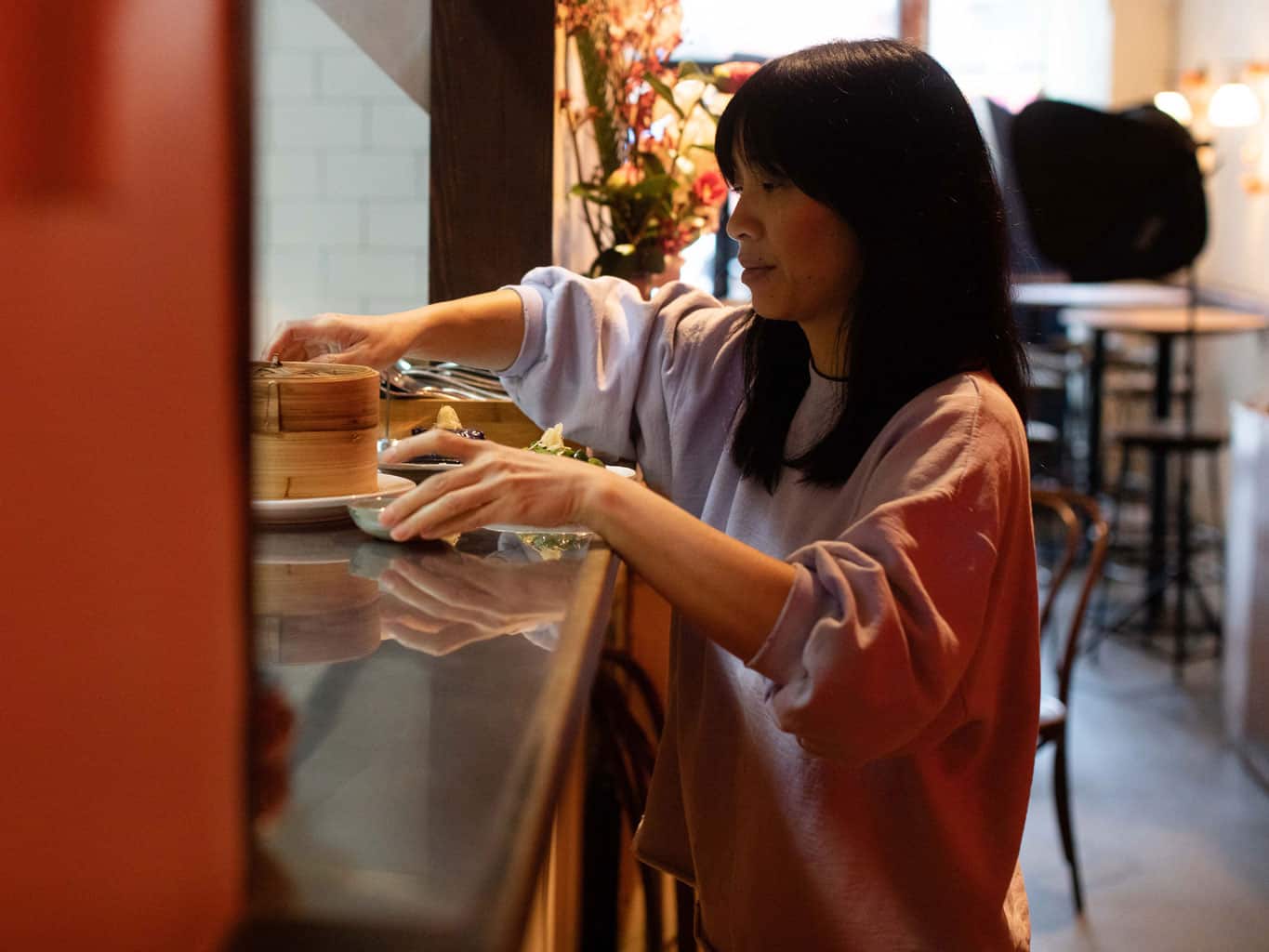 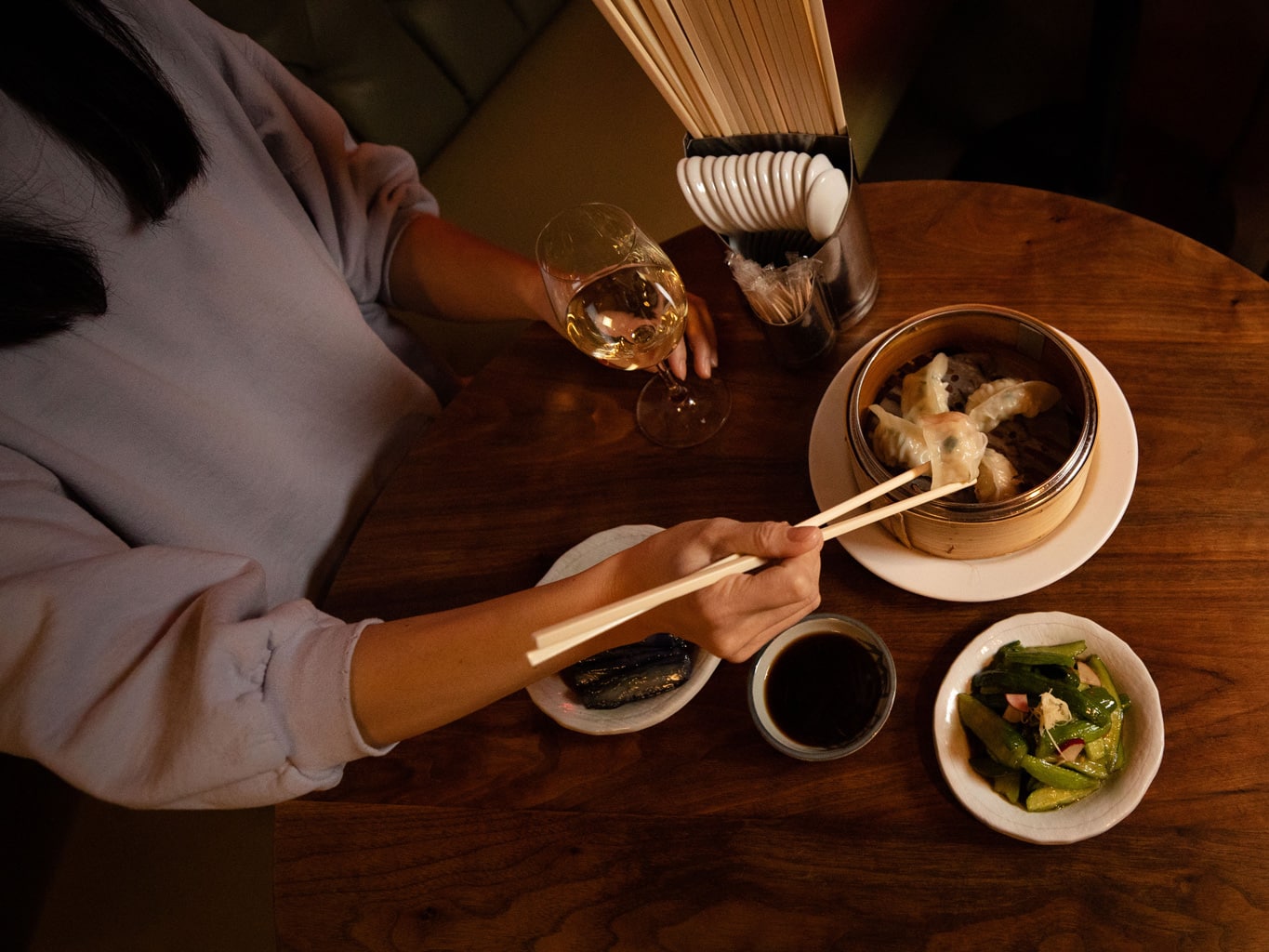 Ling settled in on Keefer Street in Chinatown proper for its ‘authentic feeling’ and history.

It was among the first in a new wave of Chinatown food businesses that are not only breathing new life into the historic neighbourhood, but preserving its heritage by bringing back the character and flavours of its past.

At first, Ling had considered setting up shop in trendy Gastown, but opted instead for Keefer Street in Chinatown.

“This is one of the only neighbourhoods that still has a kind of authentic feeling. It still has a sense of history.”

“The concept matched the neighbourhood, and I liked the fact that we could go into the shops around us, and buy groceries and different ingredients in the herbal stores for the bar,” says Ling. “And this is one of the only neighbourhoods that still has a kind of authentic feeling. It still has a sense of history.”

In more recent years, Ling had concerns about gentrification, especially when a Starbucks moved in down the street. “I thought it was foreshadowing a lot worse things to come,” she says, “but it actually just shut down.”

As Vancouver property values have soared, so have the lease rates for Chinatown shops and restaurants, many of which have sat empty for years. 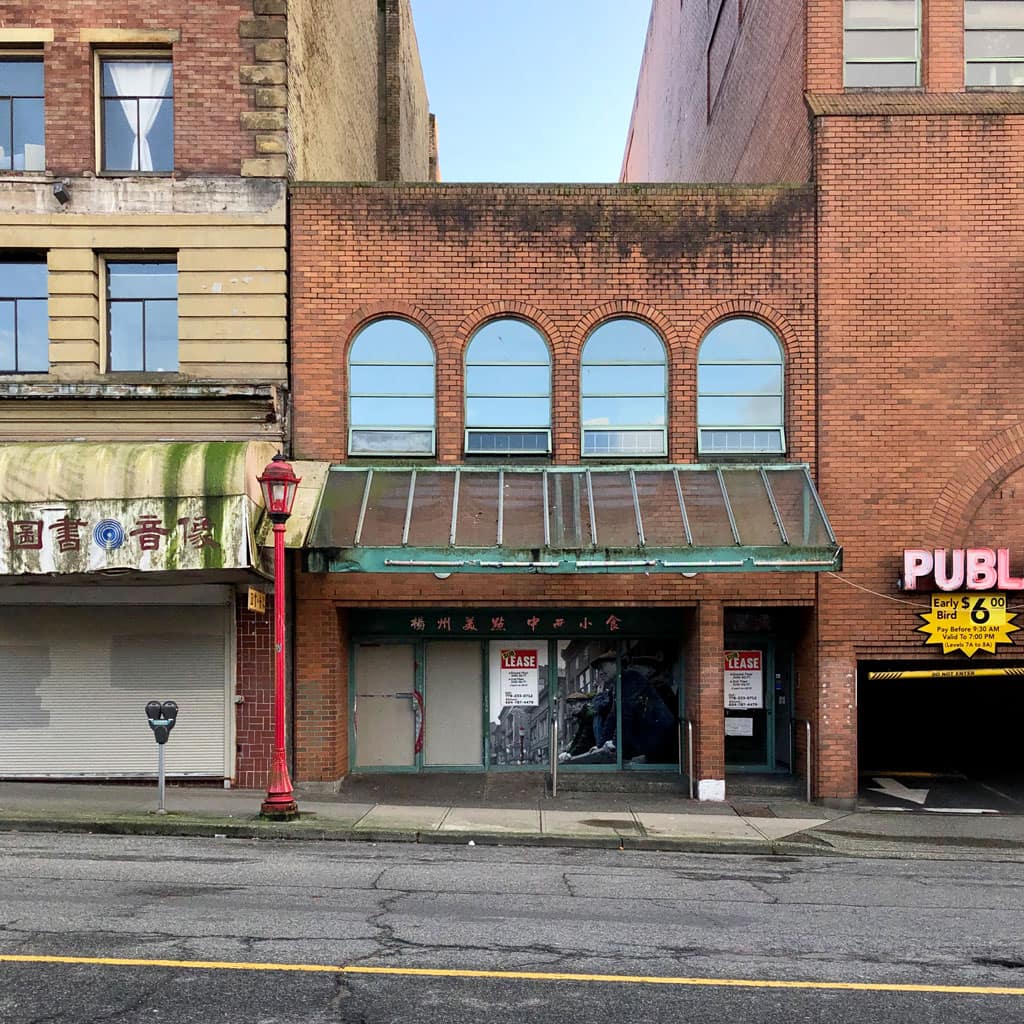 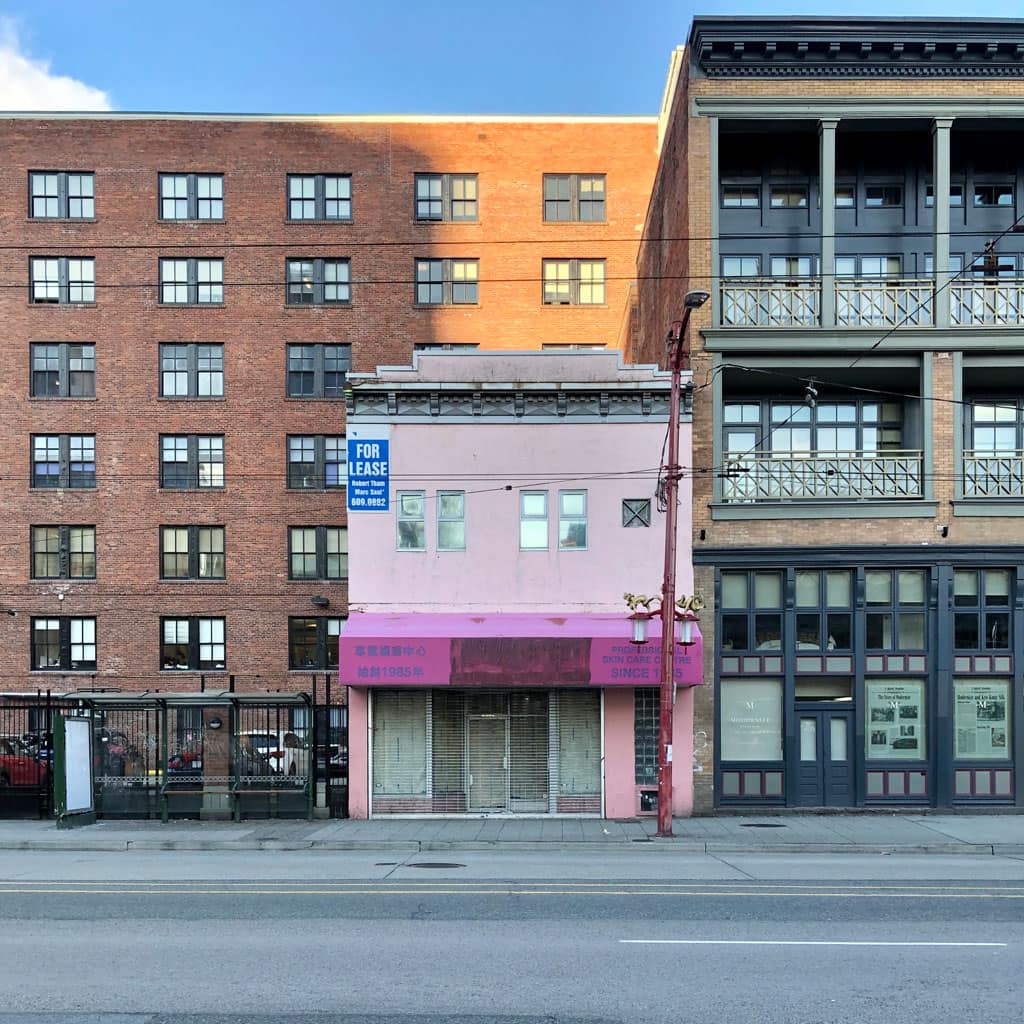 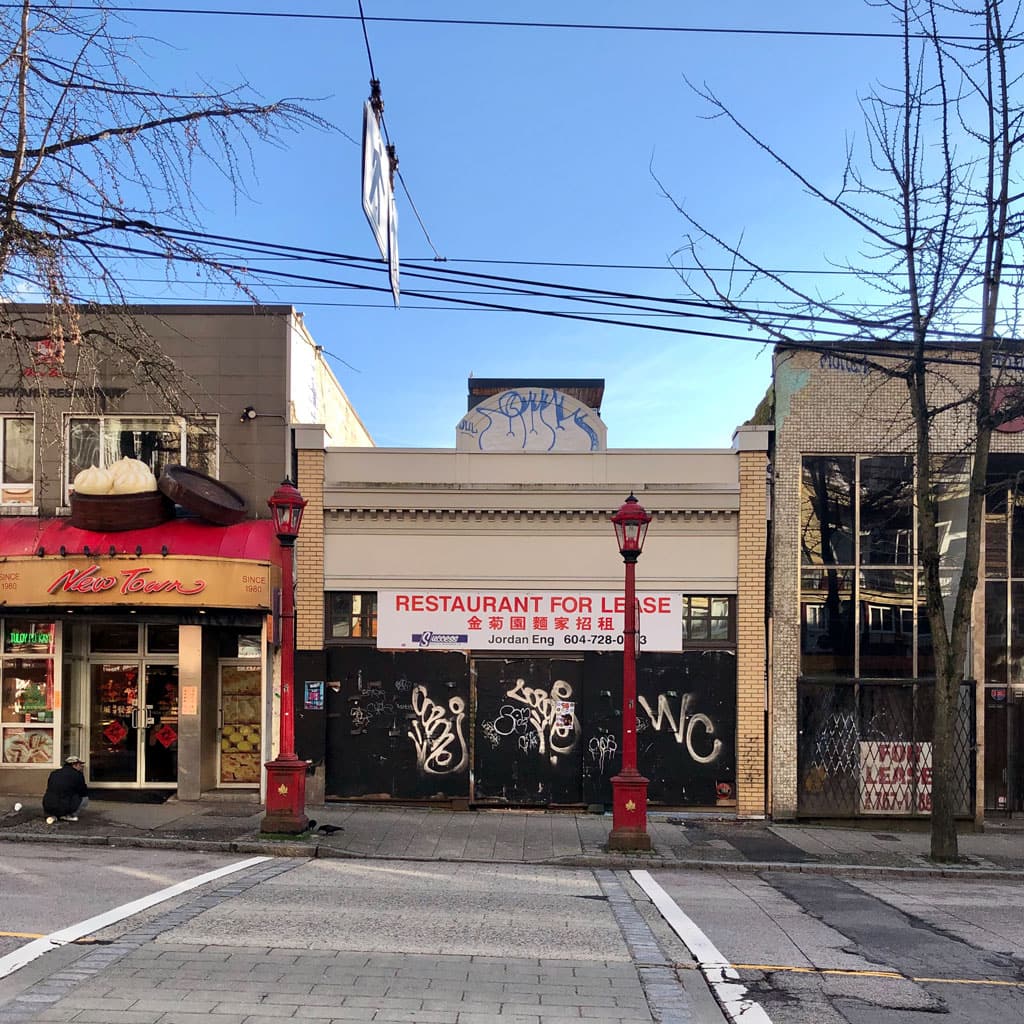 In Chinatown, history runs deep. In the late 1800s, Chinese labourers settled in the area, forming one of the largest Chinese communities in North America.

By the 1990s, however, many Chinese immigrants and their families were moving to other areas such as Richmond and Burnaby, and the next generation declined to take over family businesses, triggering a gradual hollowing out of the area.

Vancouver property values began to soar, and with them the lease rates for Chinatown shops and restaurants, many of which have sat empty for years. At the same time, the Downtown Eastside’s illicit drug crisis deepened and spread into adjacent Chinatown, creating the perception that it was no longer safe, which further alienated businesses.

Carol Lee remembers Chinatown when it was a vibrant community, full of busy shops and restaurants. Her grandfather owned a store, and her family would socialize in the area and gather for banquets.

“We hope that we can maintain some of the old businesses. But we need to have new businesses coming in, too.”

Now a prominent businesswoman, entrepreneur and founder of the Vancouver Chinatown Foundation, Lee is aiming to revitalize the neighbourhood by rejuvenating its economy and culture through food. 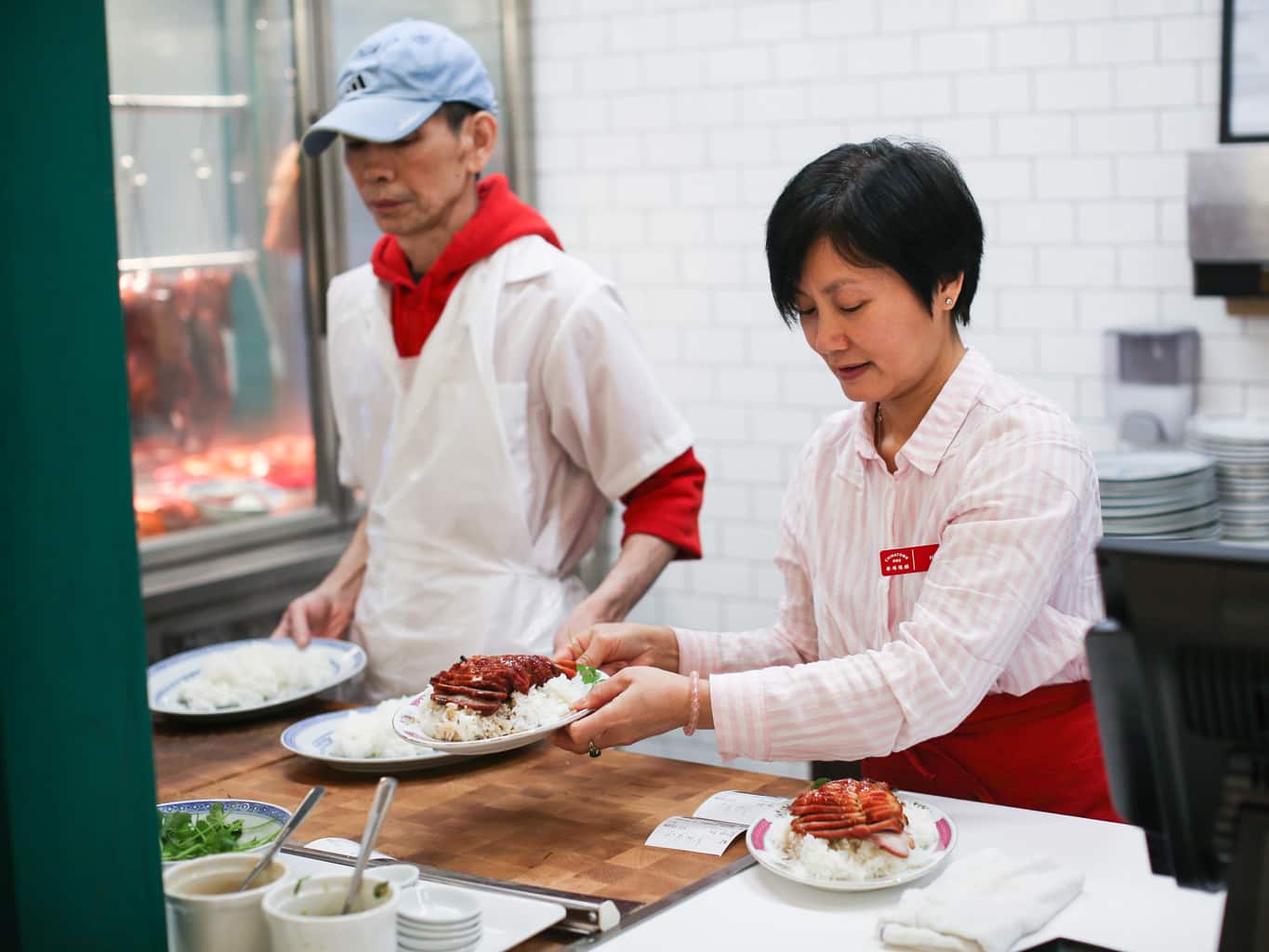 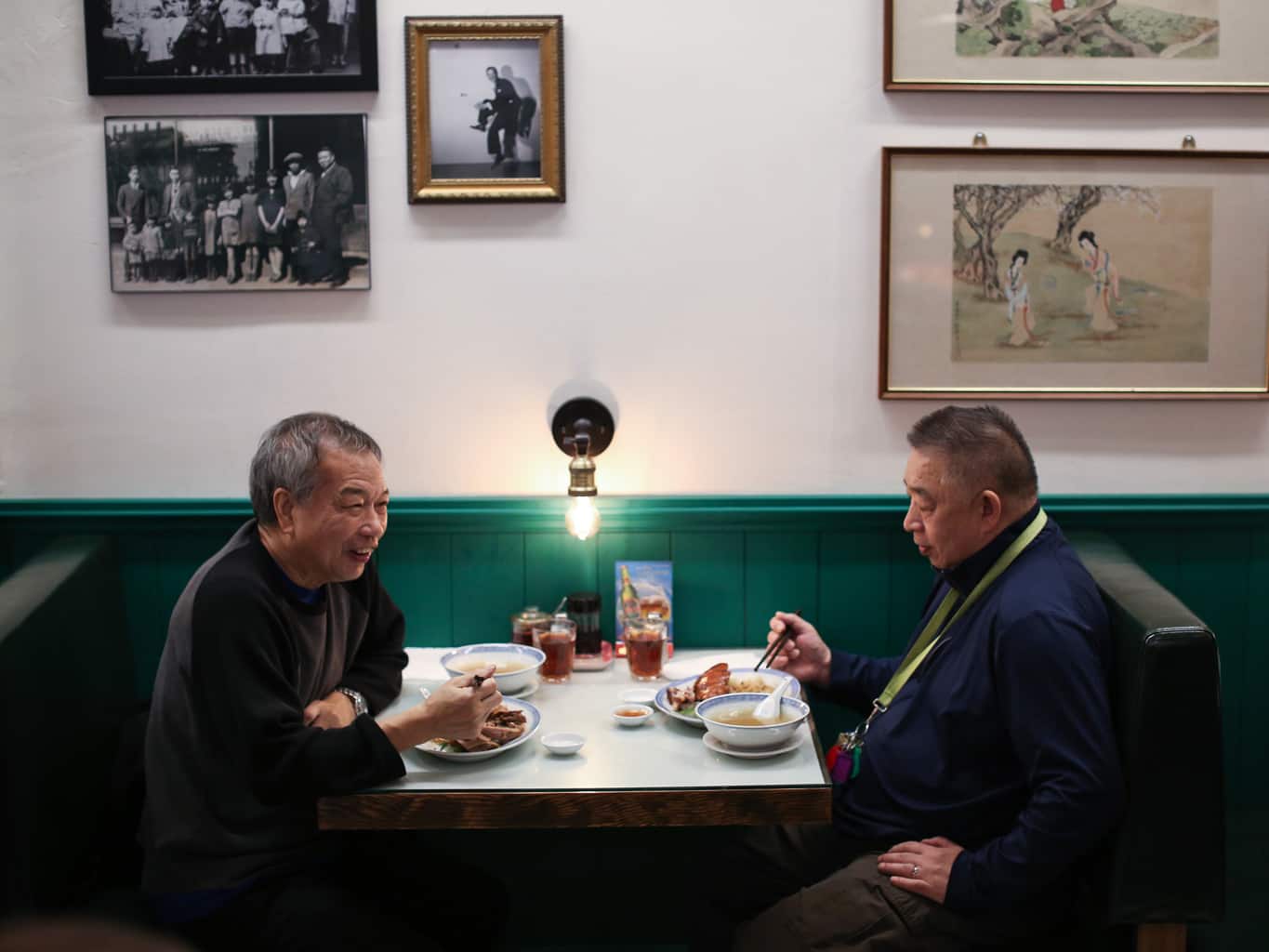 With Chinatown BBQ, Lee wanted to draw ‘people back through food.’

“We felt it was an important part of a revitalization, of bringing people back through food,” says Lee, who aimed to create an affordable and thriving community hub.

This summer, she will open a new incarnation of one of Chinatown’s most legendary eating spots, Foo’s Ho Ho — a restaurant famed for its homestyle Cantonese cooking and its memorable neon sign.

Ho Ho Restaurant and Sun Ah Rooms, circa 1977 (left) and the same building and entrance at Pender and Columbia Streets in February 2020. 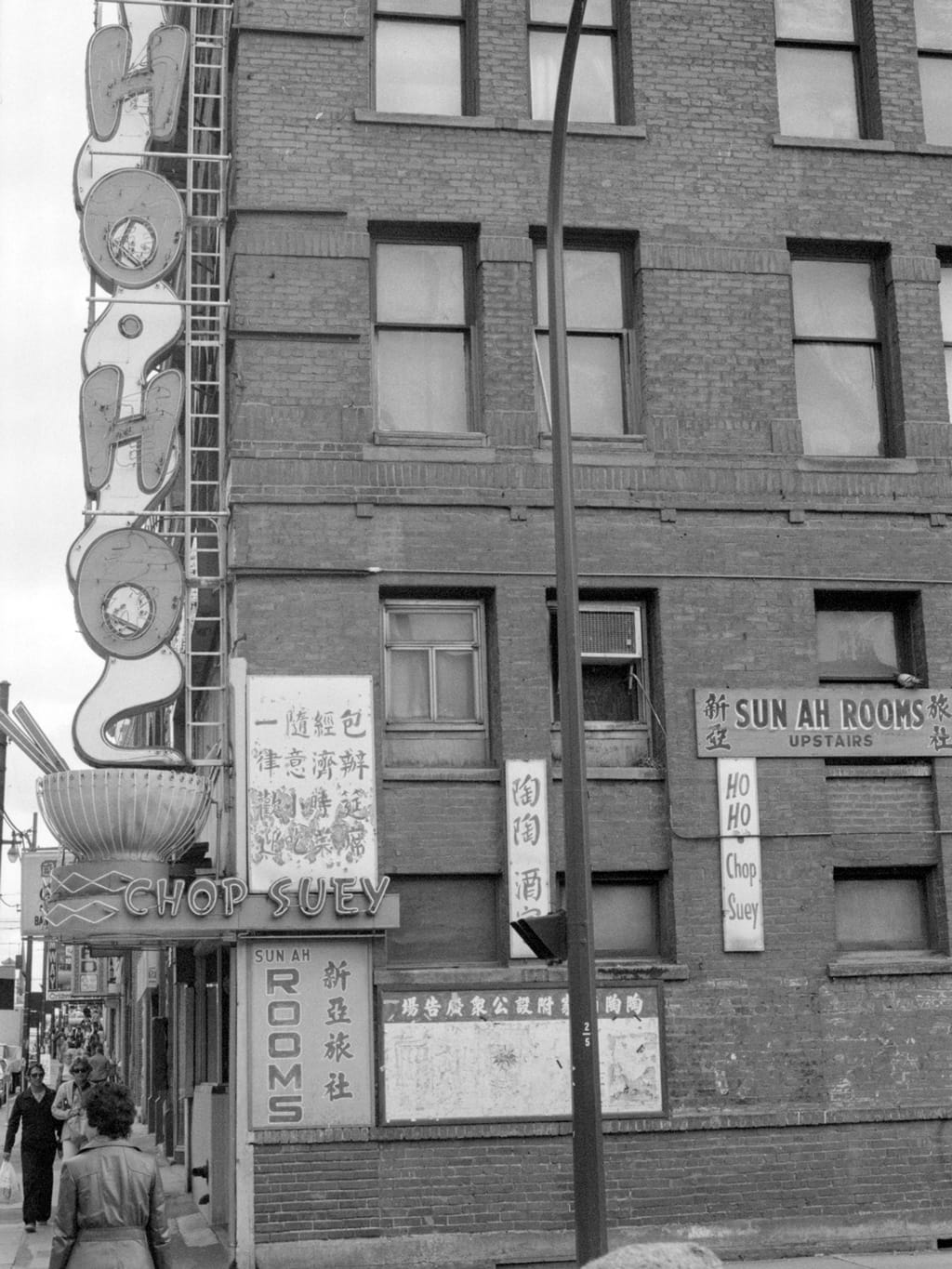 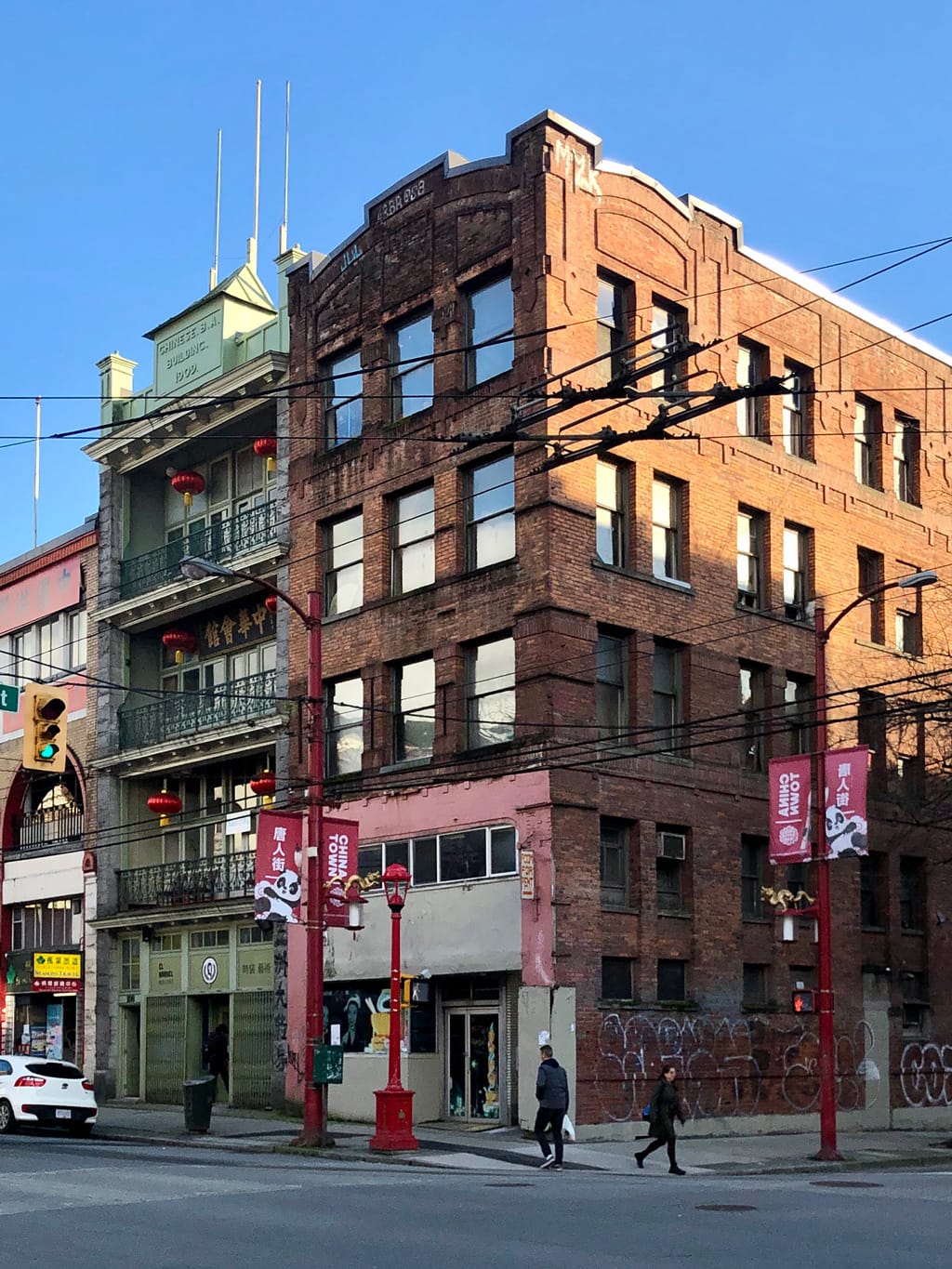 While some people have raised concerns over non-Chinese businesses moving into the increasingly trendy neighbourhood, fearing the steady march of gentrification, Lee says she appreciates that once-shuttered storefronts are opening up again.

“We hope that we can maintain some of the old businesses. But we need to have new businesses coming in, too,” she says. “Having a healthy balance is good.”

Maintaining those old businesses has proven to be a significant challenge. According to a 2017 Hua Foundation report, 50 per cent of Chinatown’s fresh food stores — greengrocers, fishmongers, barbecue meat shops and butchers — were lost between 2009 and 2016. Thirty-two per cent of Chinese dry goods stores and 56 per cent of food service retailers also closed during that period.

At the same time, a study by the City of Vancouver and the University of British Columbia confirmed that food is one of the neighbourhood’s most important “intangible cultural assets.”

“Places like New Town Bakery and Chinatown BBQ aren’t simply a restaurant or a store. They really are part of Chinatown's culture,” says planner Helen Ma, co-lead of the city’s Chinatown Transformation Team, which aims to strengthen the area’s heritage in all its forms. 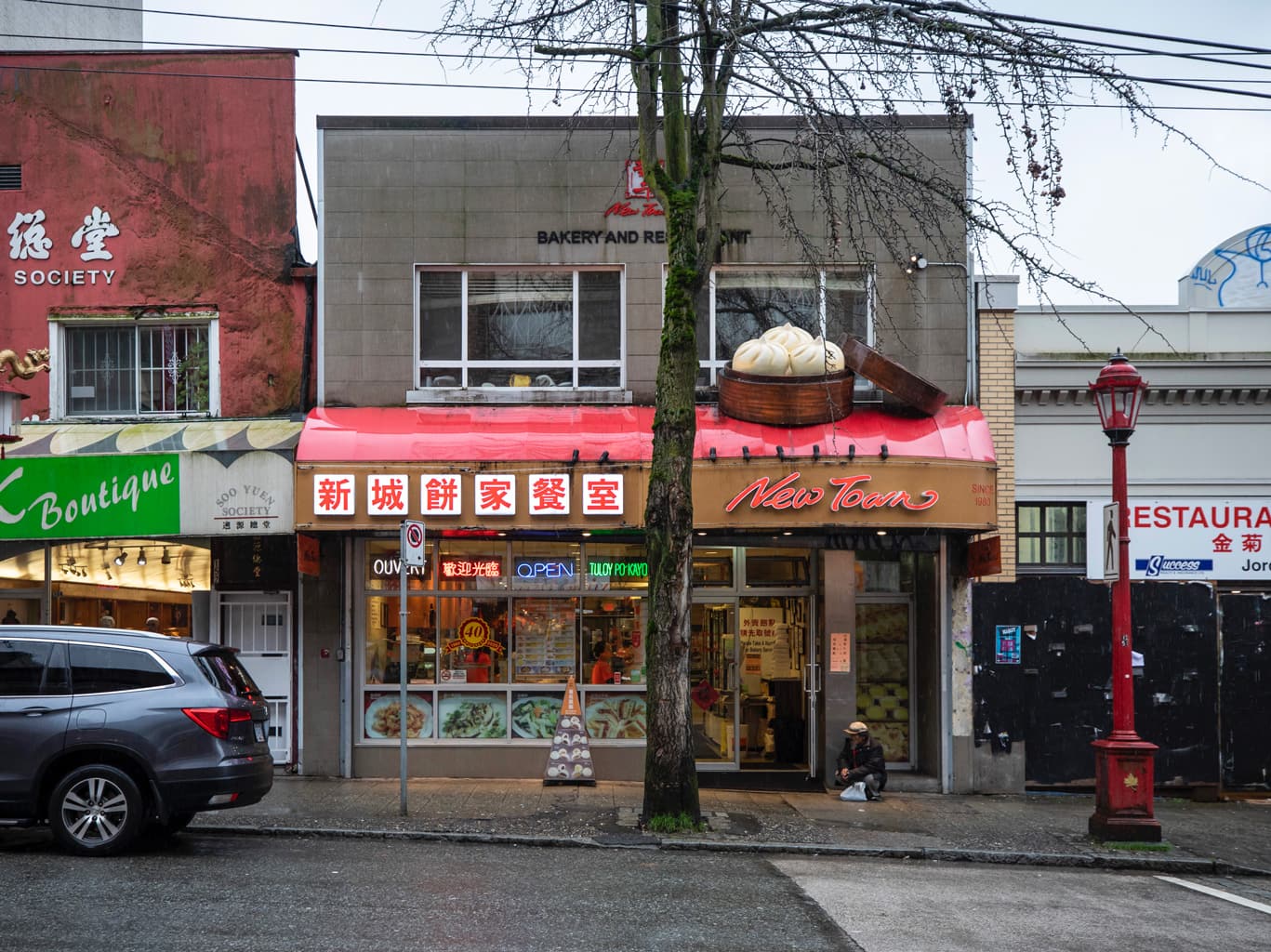 Food is at the centre of culture preservation at New Town Bakery, a decades-old fixture in Chinatown, and Chinatown BBQ, a newer addition.

Thirty-two per cent of Chinese dry goods stores and 56 per cent of food service retailers closed between 2009 and 2016, according to the Hua Foundation.
Photo: Andrew McManus/CBC 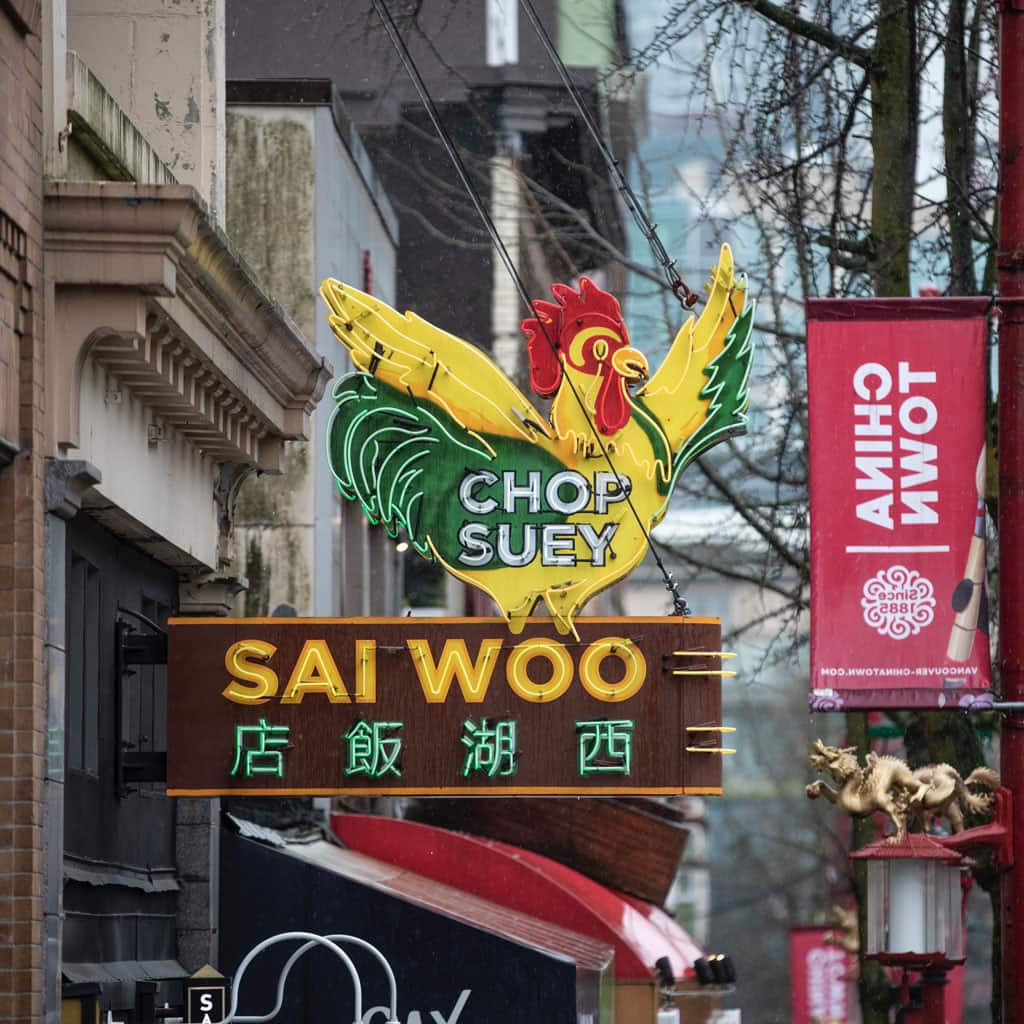 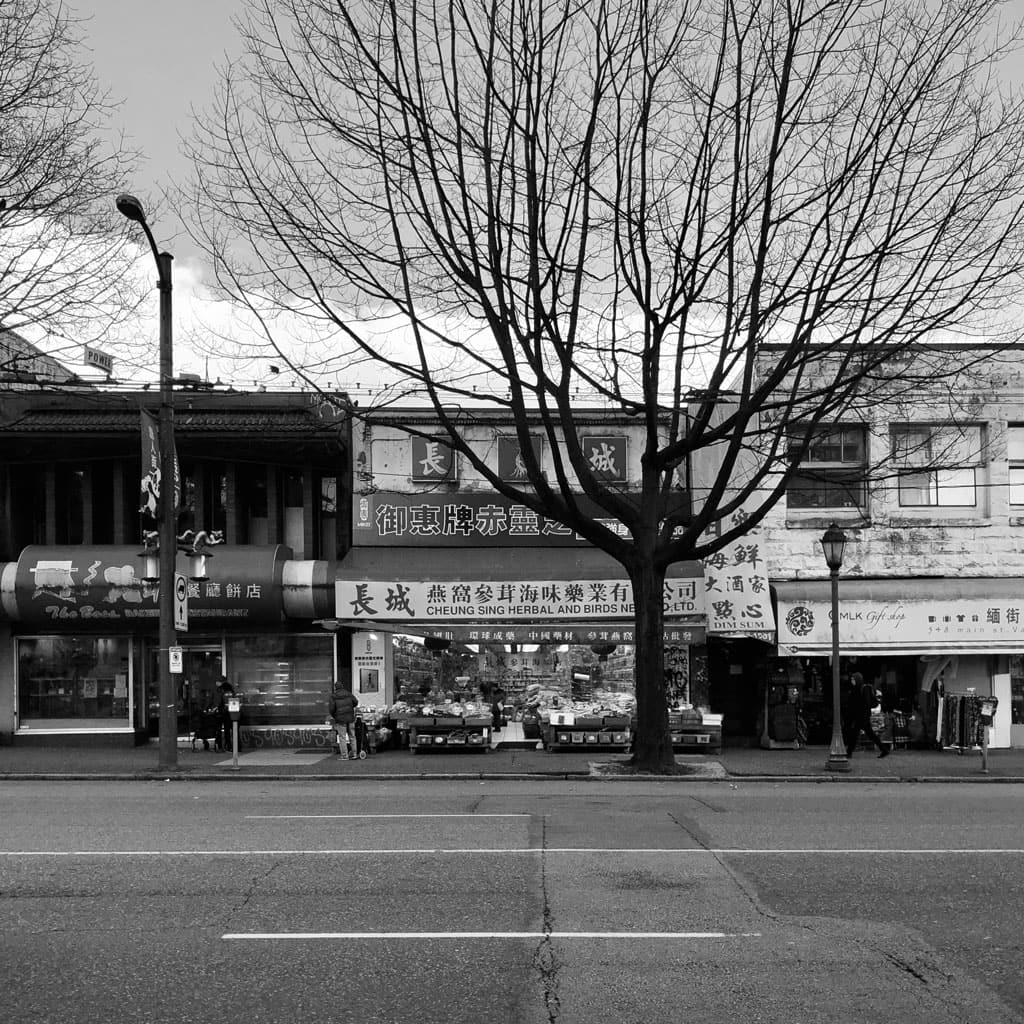 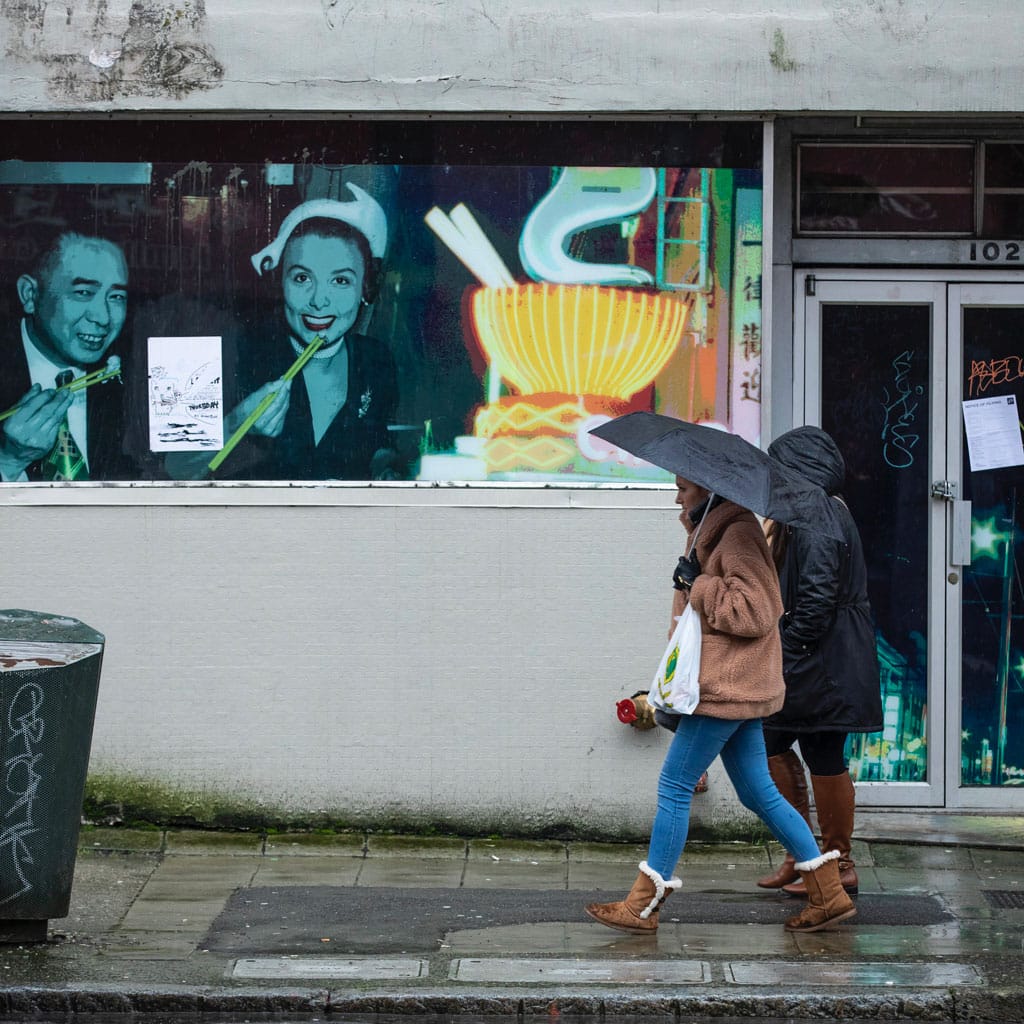 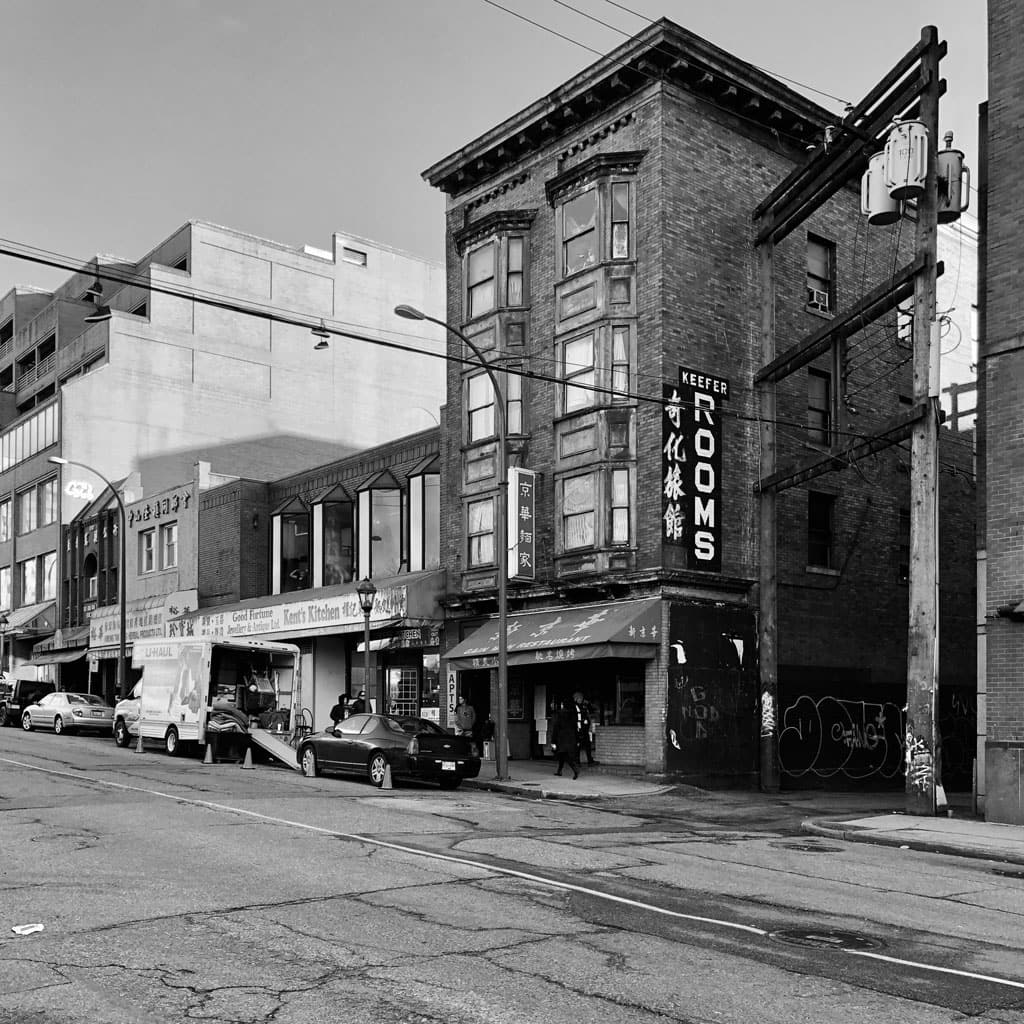 Ma says the city is limited in terms of providing financial assistance to businesses, but is actively looking at assisting in other areas, such as marketing, business planning and succession planning for when longtime owners retire.

It is also aiming to help educate non-Chinese business owners who might be attracted to the area for its heritage look and cheaper rents, so they can better understand the neighbourhood’s history and culture.

“There is a great opportunity for Chinatown to remain a living neighbourhood,” says Ma. “I think most people would be very sad to experience Chinatown in a museum in the future. They want a real neighbourhood where they can still smell the buns, smell the baked goods, eat the food, speak the language.

“That's something that cannot be replaced.”

The Wing Sang building at 51 East Pender St. circa 1900 (left) is the oldest building in Chinatown, and currently home to the Rennie Museum. 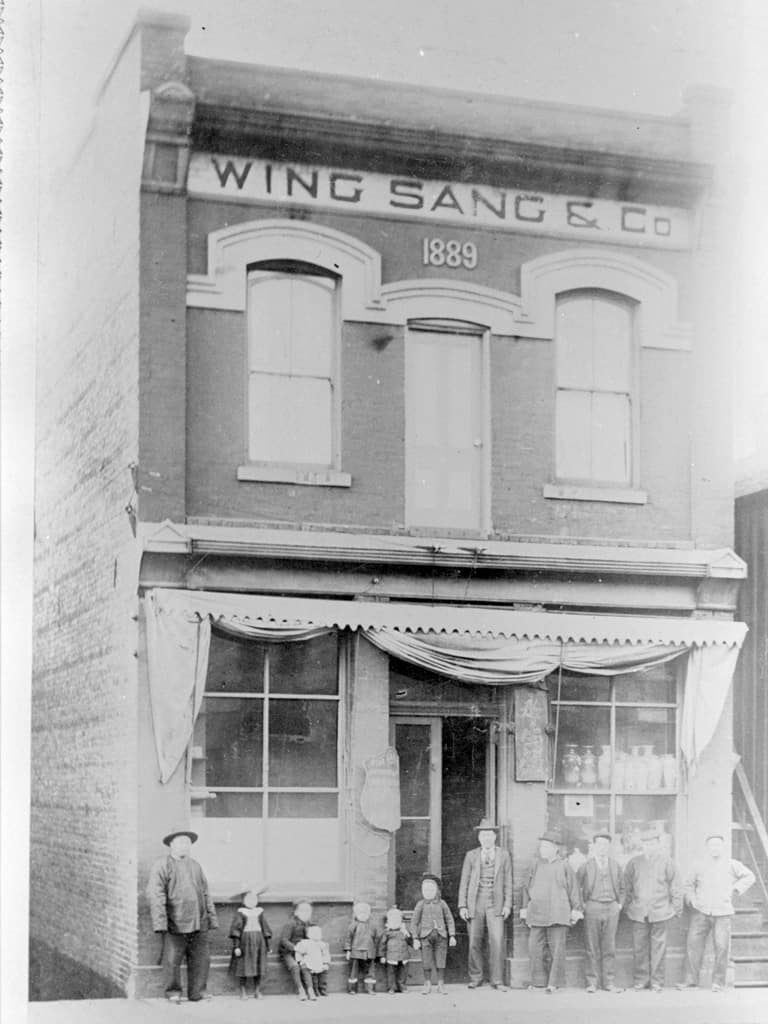 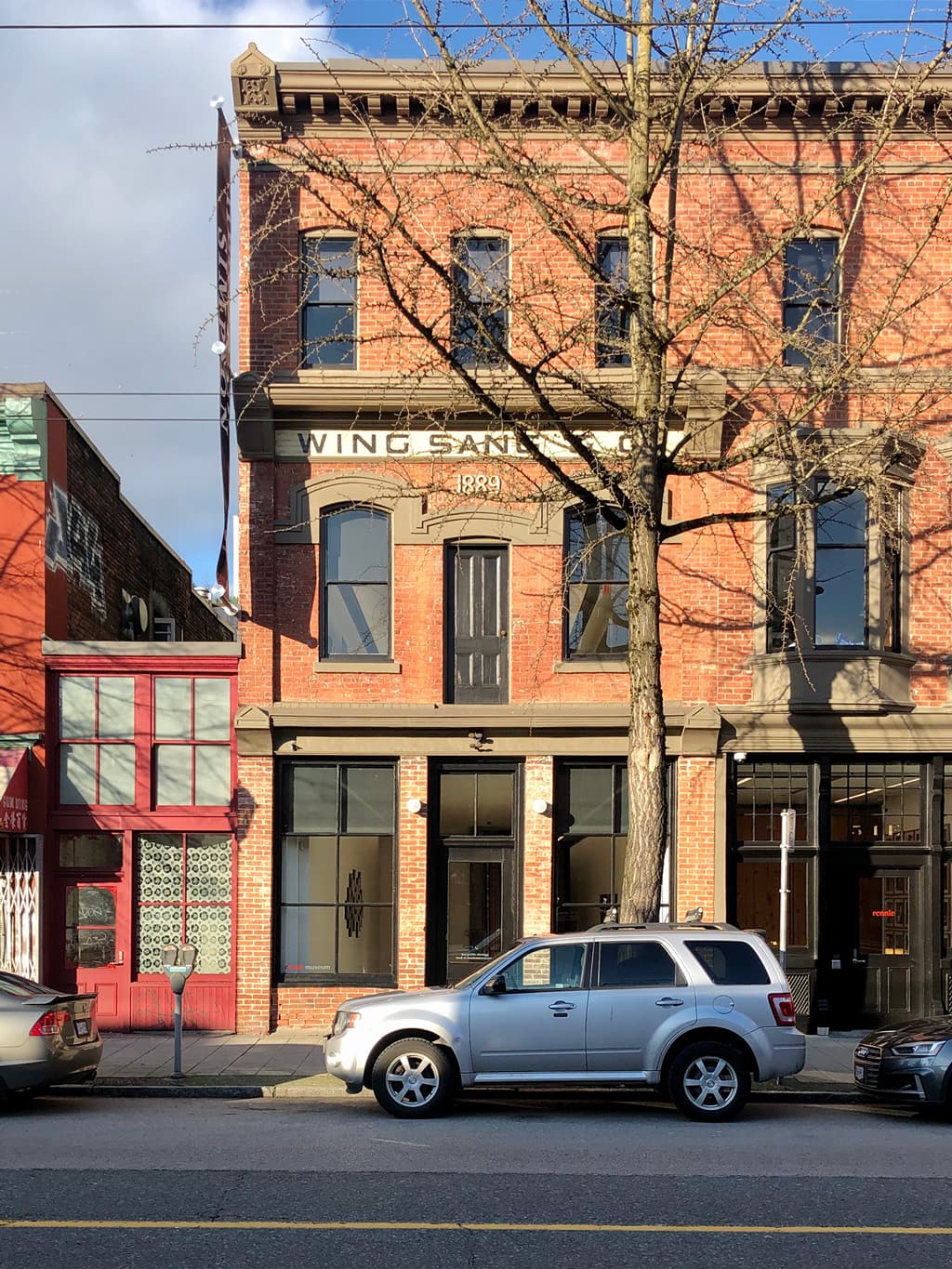 For over 40 years, people have been smelling the legendary steamed buns at New Town Bakery, which owner Susanna Ng took over in 1980. Those were the days when more Chinese immigrants settled in the neighbourhood, she says, and before the T&T supermarket moved in, putting additional pressure on small shops.

Over the years, the bakery has moved twice — the second time because Ng had the chance to purchase the building, a move that secured the popular business’s future.

“My whole life has been in Chinatown.”

Still, she says, it’s a tough slog. Changes to the rules around foreign workers have limited her ability to hire Chinese cooks and bakers; drugs and homelessness in the area present constant challenges; and her 55-person staff is rapidly aging, while the younger generation doesn’t want to step in. 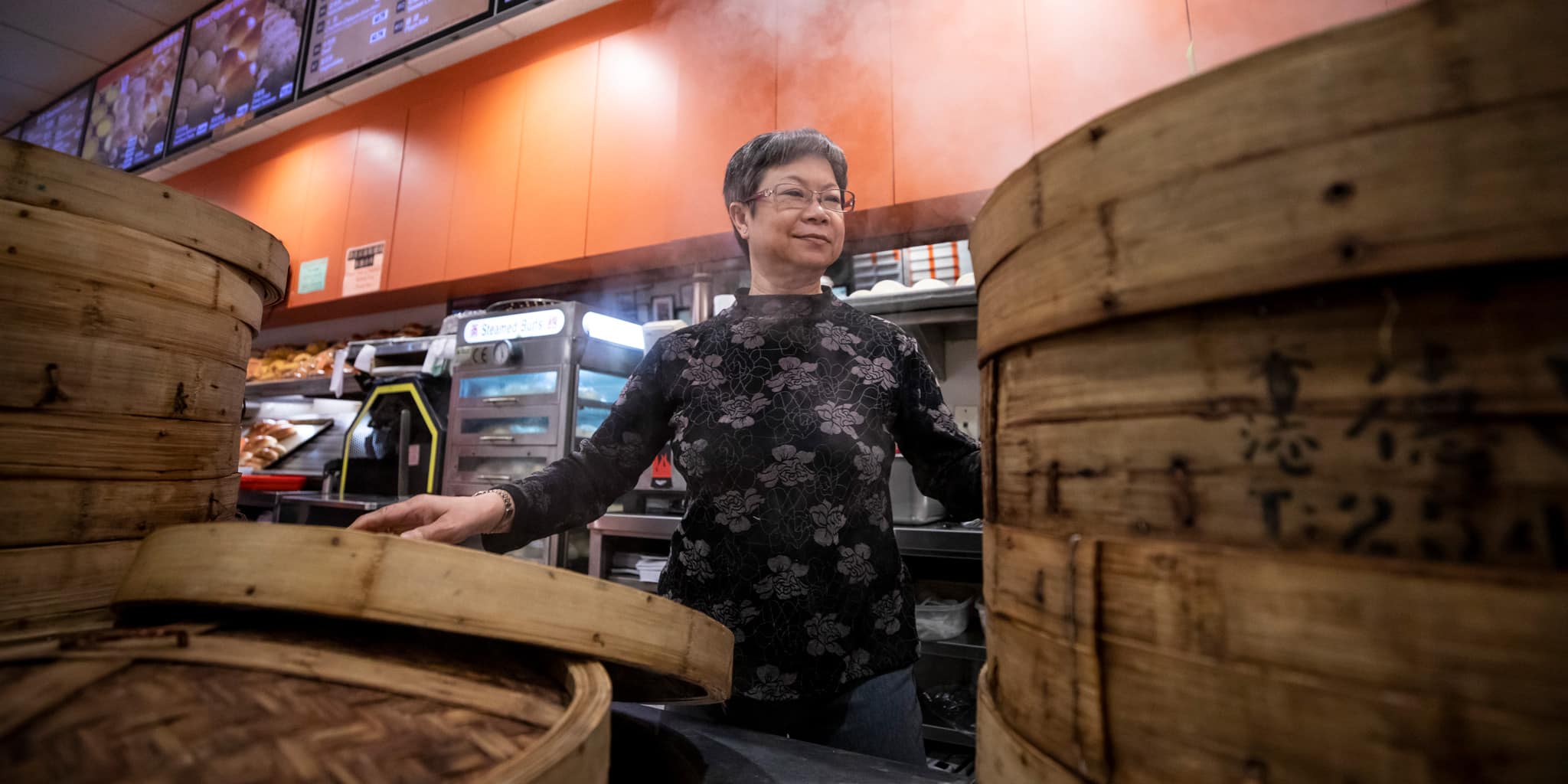 At 65, Ng has no plans to hang up her apron anytime soon.

“Chinatown isn’t the past. It’s actually the future.”

“That’s pretty much a summary description of what Chinatown is. Chinatown isn’t the past. It’s actually the future,” says Yan, whose grandfather arrived in Vancouver in the 1920s and ran Most Modern Laundry. His father later opened Kwangchow Restaurant, one of the city’s first Hong Kong dim sum parlours, on Pender Street.

But at the same time, he points out, businesses are faced with crippling lease rates, high taxes and other costs — and because of their small size and low profit margins, many can’t stay afloat. 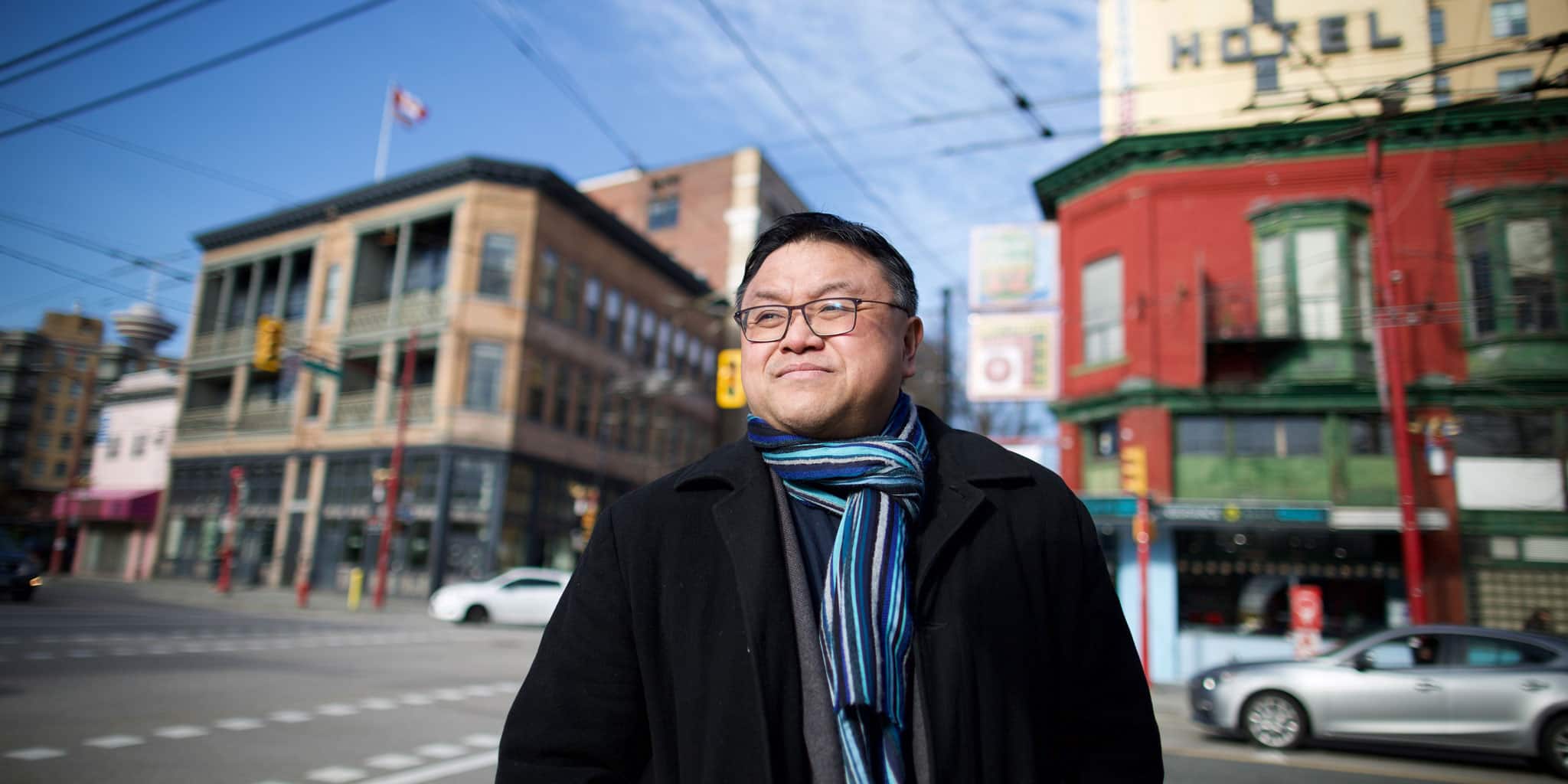 Ideally, Yan would like to see a kind of master leasing program through which landlords could get a break on taxes in exchange for sharing in their profits. He also says all levels of government need to better address the issues of affordable housing, addiction, homelessness and public safety.

“You cannot expect the level of government with the least amount of resources to deal with some of the incredibly huge systemic failures when it comes to housing security, when it comes to economic development,” Yan told The Current's Chinatown forum at Floata Seafood Restaurant.

If governments fail to help safeguard the area, adds Yan, Vancouver risks losing one of the city’s most culturally rich and diverse communities.

“It’s not going to be easy, and it’s not going to be cheap, but then what’s the alternative?” he says. “It’s not only a hollowing out of the city. It’s a rootless city — a city that’s just there as an object as opposed to a living organism that we can all inhabit.”

Will Wang is part of a surge of young business owners who are choosing Chinatown — not because they have ties to its past, but because they see potential in its future.

The third-generation Chinese-Canadian, who co-owns Propaganda Coffee, grew up with the impression that Chinatown was a dangerous area to be avoided.

But years later, when the coffee aficionado scouted a location for his business, he liked the walkability of the neighbourhood and its relative affordability.

“I’m seeing a lot of younger generations move in.”

“There was development in terms of residential building and infrastructure, and at the time we thought — and we still think — that the neighbourhood has good potential,” says Wang

“And we were partially right. I’m seeing a lot of younger generations move in.” 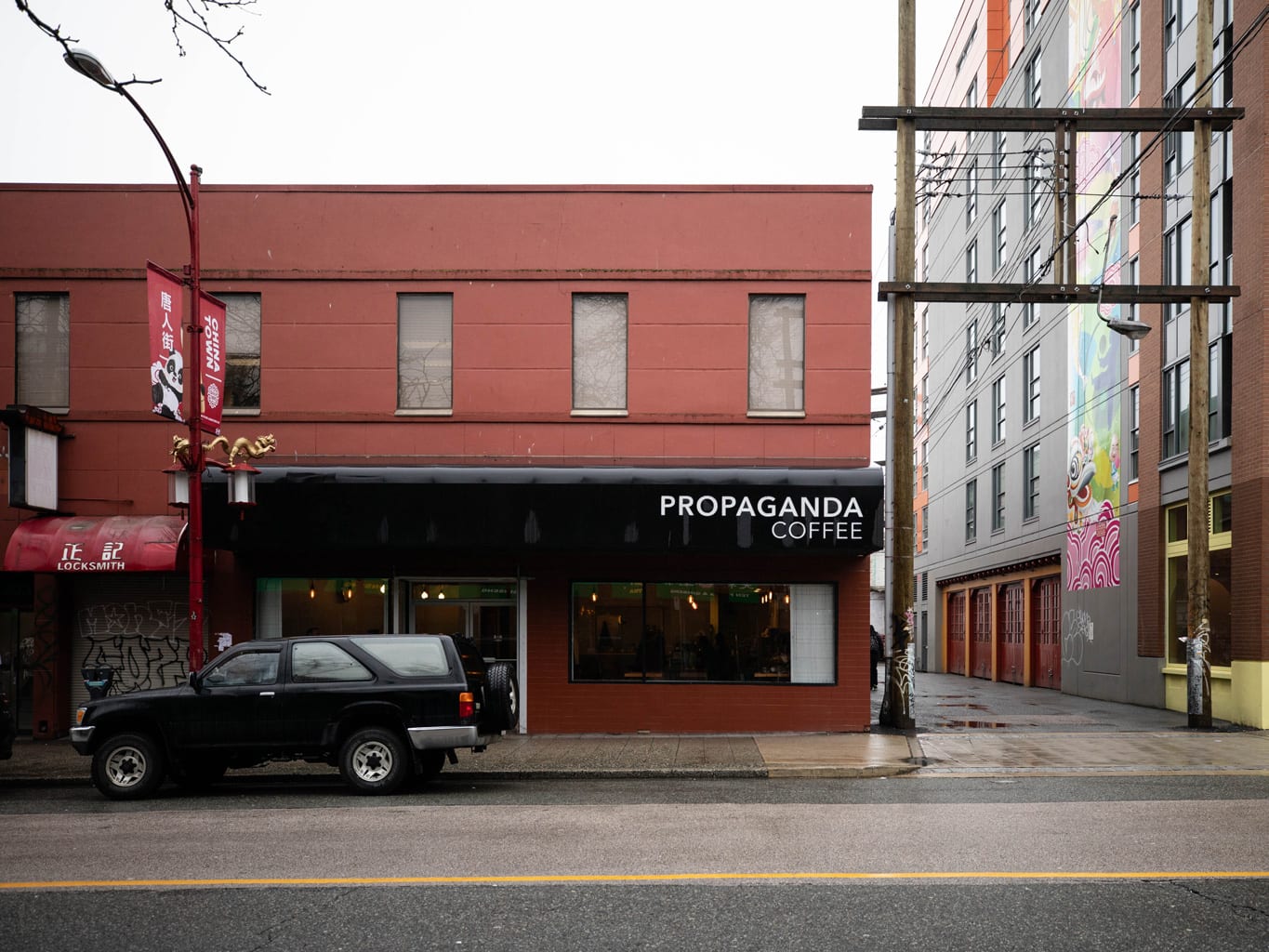 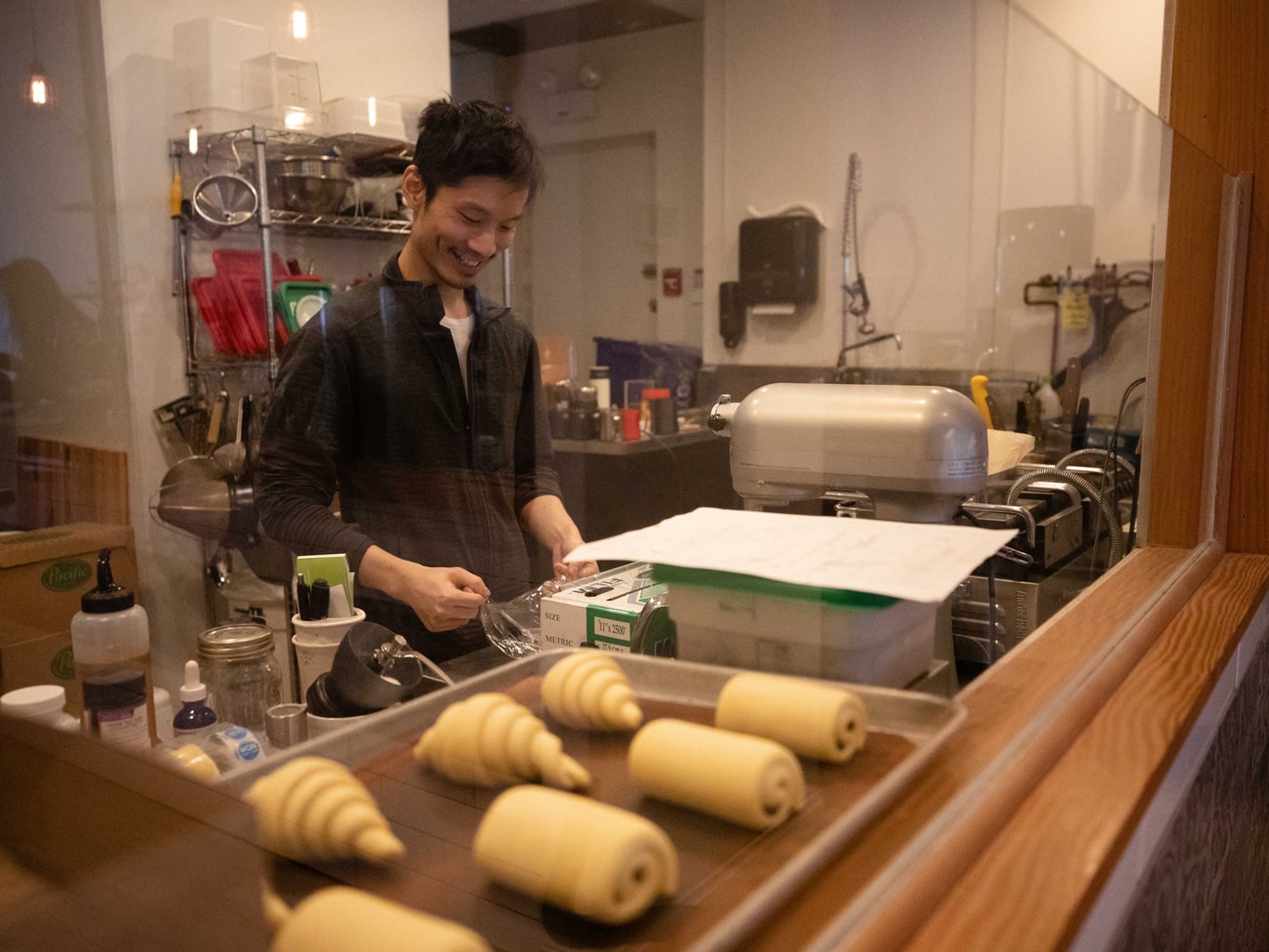 Wang opened shop in Chinatown for its walkability and affordability, but also its potential, he says.

Many of the storefronts around him remain vacant, he says, but a donut shop just moved in next door, an oyster place is going in beside them and a juice shop is opening nearby.

While he would like to see Chinatown’s heritage retained, he also welcomes the new businesses, whether or not they are specifically Chinese.

“We all have to adapt,” says Wang. “It would be nice to maintain Chinatown the way it is, but if no one's moving in that is Chinese, I would rather have anybody there than it just being vacant and having graffiti all over.” 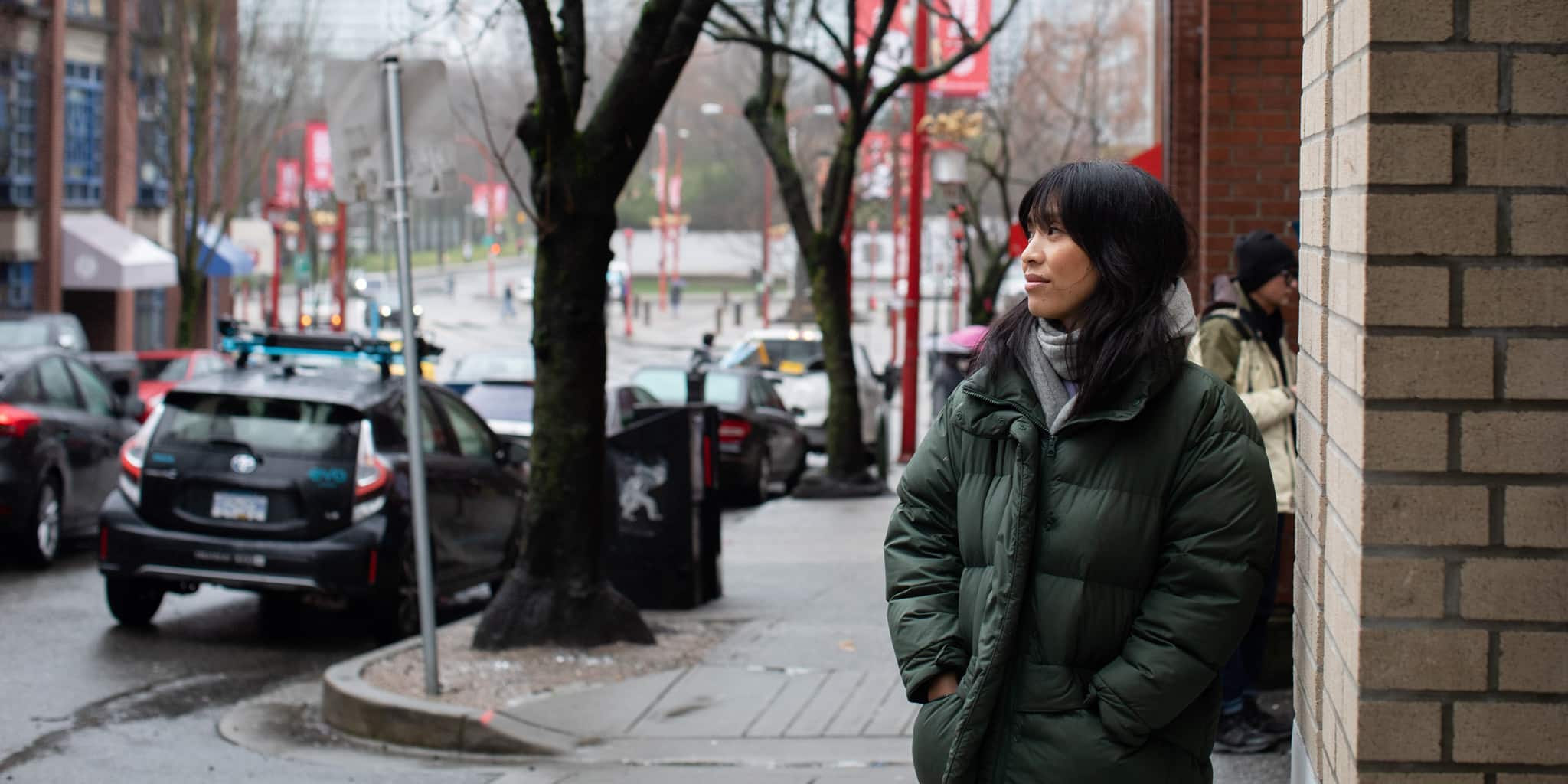 Ling says she sees ‘a lot of good things happening.’

Over 10 years, Bao Bei’s Ling has seen both good and bad changes in Chinatown.

When her restaurant first opened, it was one of the few open after dark; now there are several restaurants and bars that draw customers to the area at night.

Ling says the food businesses in the area have formed a tight bond, borrowing items from each other when they run out, and frequenting each other’s restaurants and shops.

If you’ve enjoyed Changing Chinatown, please take a moment to share it.

Read more on ‘the physical legacy of struggle and sacrifice’ of Vancouver’s past, and the ‘bright stars creating space for the community’ in Vancouver’s changing Chinatown. 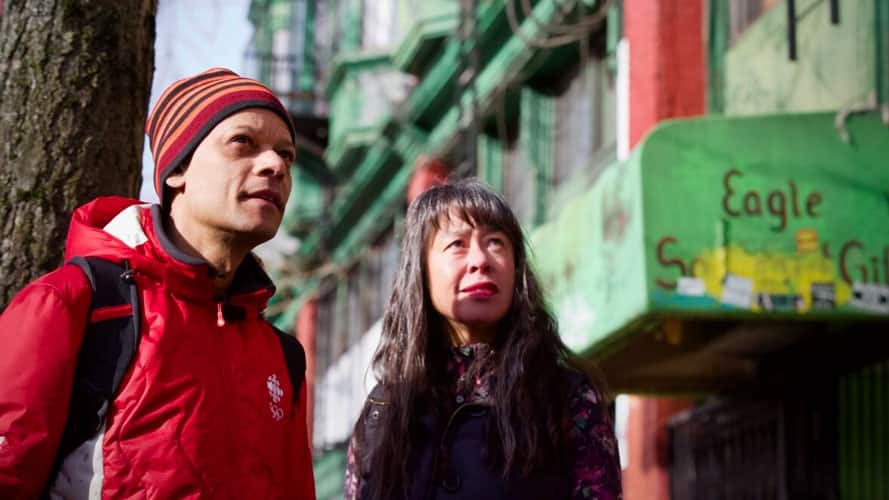 ‘The physical legacy of struggle and sacrifice’: How Chinatown is part of Vancouver’s past — and its future

‘The reports of the death of Chinatown have been greatly exaggerated,’ says planning professor 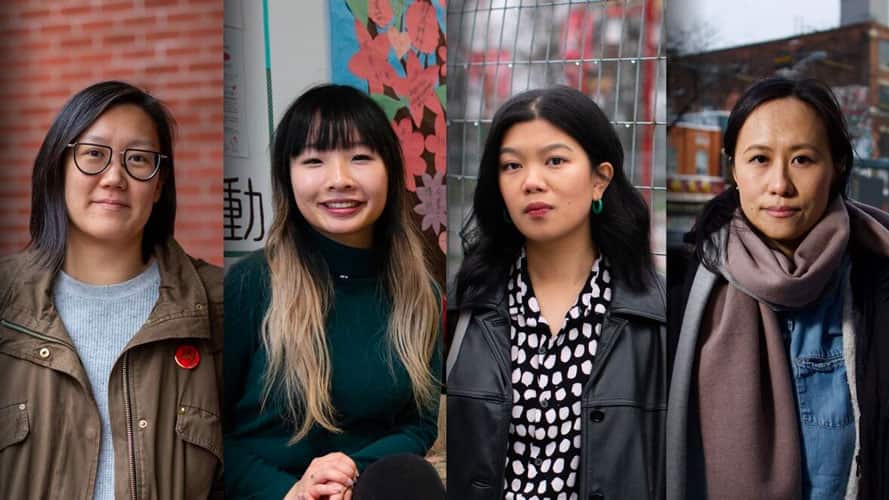 In search of connection to Chinatown, these advocates are helping build intergenerational communities