How to document a sexual revolution Skip to main content

How to document a sexual revolution

Toronto police officers strike and attempt to detain a protester during a June 20, 1981 demonstration, following a second round of raids on bathhouses in the gay village. (Gerald Hannon/CLGA Archives)

What does it mean to be seen?

For the gay liberation movement of the late 1960s to mid-1980s, photos served not only as a visual archive of the protests and activists that defined the era, but they humanized a community long vilified by society, politicians and the police.

Gerald Hannon, a writer and photographer for the Body Politic — a magazine born out of Canada’s gay liberation movement — played a key role in documenting the struggle of Toronto’s LGBT community.

Before the era of globally live streamed protests and viral activist hashtags, photos were essential to capturing social movements.

“I saw myself as documenting everything, as giving faces, shapes and bodies to a hitherto invisible minority,” Hannon, 74, told Uncover: The Village, in an email interview. Gerald Hannon, pictured at the Body Politic office in Toronto, in the late 1970s. (Submitted by Gerald Hannon)

Hannon, known for his controversial work in the Body Politic, captured Toronto’s gay rights movement throughout the ‘70s and ‘80s.

His photographs stand as a time capsule of a period that saw police raids on gay spaces and protests in Toronto's Gay Village. “The gay community had a difficult birth,” Hannon said.

“The times felt strangely urgent, as if all this bubbling activity might vanish and be forgotten if my camera wasn’t there.” George Hislop, left, and Rev. Brent Hawkes, right, are pictured during a Feb. 20, 1981, demonstration protesting police raids on Toronto bathhouses. Hislop was a prominent activist, business owner, and the founder of the Community Homophile Association of Toronto. (Gerald Hannon/The ArQuives)

The camera offered both risk and safety for Hannon. With a front row to protests and clashes between “queer bashers” and police, he was an easy target.

At the same time, he felt “protected by the invisible wall that seems to enclose the media.”

On Halloween of 1971, Hannon was assigned to photograph a celebration between the St. Charles and Parkside taverns — two well-known gay bars.

The sidewalk between the two venues served as a runway of sorts for drag queens. But the annual celebration, which dates back to the 1960s, had a darker side.

Onlookers pelted the party-goers with eggs and insults. Broken eggs are visible on the ground outside the St. Charles Tavern after a drag queen was pelted by onlookers. For many years, the gay community celebrated Halloween at this venue — but the event often turned into a violent and homophobic ritual. (Gerald Hannon/The ArQuives)

“Homophobia became real for me that night — it was no longer a sociological phenomenon,” Hannon said.

“I feared for the safety of the drag artists in front of the St. Charles, but I also hoped for the perfect photo, even if that might mean further violence.”

“What struck me was how ‘normal’ the homophobes looked — nice young boys and girls from the suburbs.” 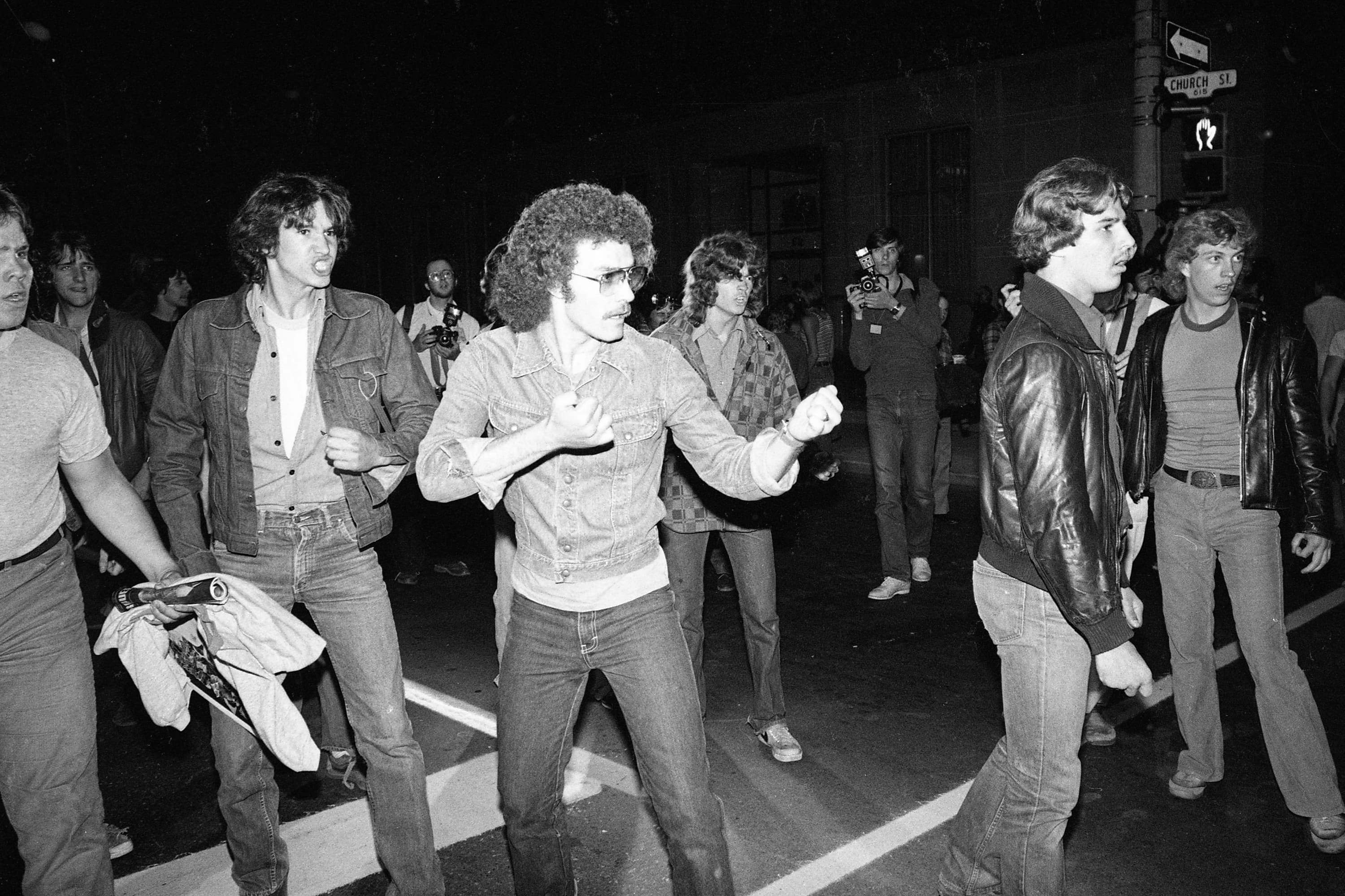 'Queer bashers' threaten protesters at a June 20, 1981 demonstration on Church Street, the heart of the gay village, in Toronto. (Gerald Hannon/The ArQuives) 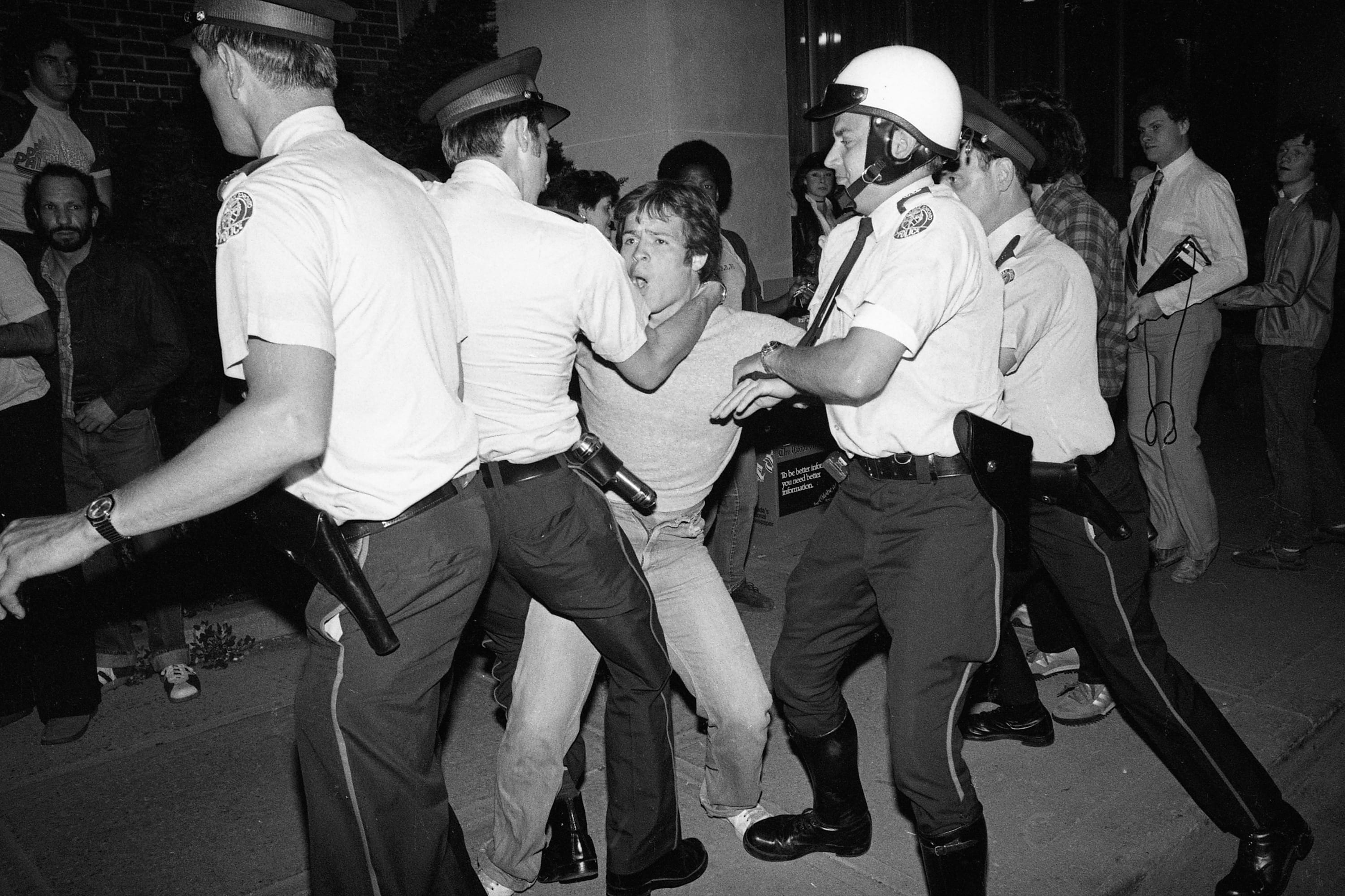 A gay man is held back by Toronto police officers during a June 20, 1981 protest in Toronto. (Gerald Hannon/The ArQuives) 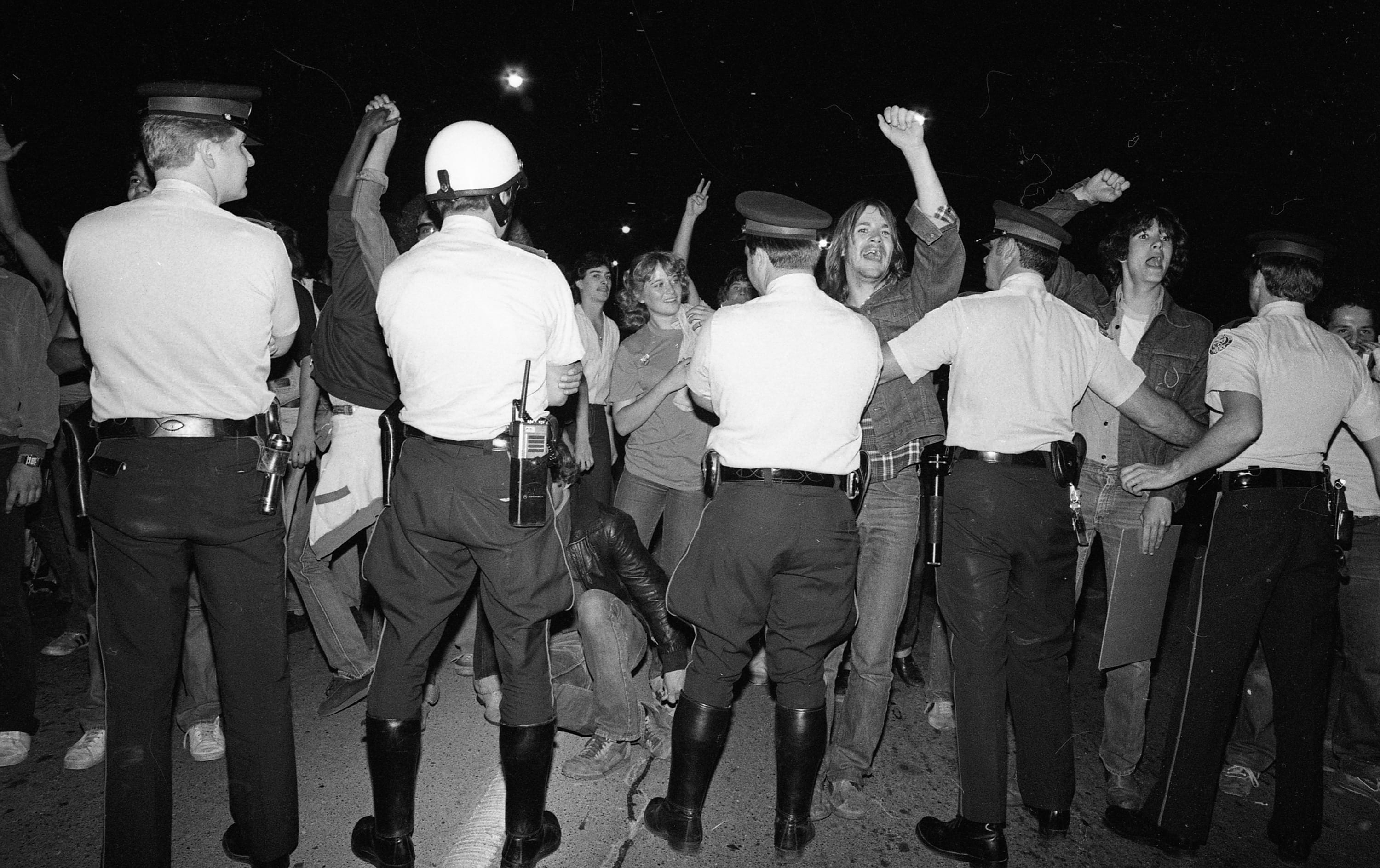 More than 250 men were arrested, with the majority of them eventually being found innocent of the charges. The following night, thousands took to the streets in protest. The subjects in some of Hannon’s photos from that night surprised him.

Several men leading the group, and holding a banner that read, “Enough is enough,” were unknown to the photographer.

“It came out that they were plain clothes cops infiltrating the march and hoping to disrupt,” Hannon said. “There was an attempt to tear the banner.” Protestors march, carrying a banner that reads 'Enough is Enough', from Queen's Park to Toronto Police division 52. The demonstration follows police raids on bathhouses. More than 250 men were arrested as a result of the raid known as Operation Soap. (Gerald Hannon/The ArQuives)

Hannon and the Body Politic uncovered photos of several undercover police officers and published them in an effort to draw attention to the force’s attempts to interrupt a “peaceful” protest.

“I had mixed reactions to all this,” Hannon recalled.

“On the one hand I was horrified by the police tactics,” he said. “On the other, it became clear that we were being taken seriously; that we represented a social movement the police felt the need to constrain and contain.”

In 2016, Toronto Police Services Chief Mark Saunders acknowledged the "destructiveness" of the bathhouse raids, expressing "regrets for those very actions." Rev. Brent Hawkes, a prominent gay activist and former senior pastor of the Metropolitan Community Church in Toronto, addresses a crowd during a protest. Hawkes would go on to perform the first same-sex marriages in the world. (Gerald Hannon/The ArQuives)

‘The personal is political’

In Hannon’s personal photo collection — and those held at the ArQuives, an organization that seeks to preserve Canada’s LGBTQ2+ history  — every day life plays a prominent role.

Interspersed between photos of demonstrations and violence are snapshots of gay life in the ‘70s and ‘80s.

“The personal is political,” Hannon said.

“That’s why my many photos of [demonstrations] and meetings were supplemented by portraits of friends and colleagues — men and women unafraid to state, through the public release of their images, that they were gay or lesbian.” 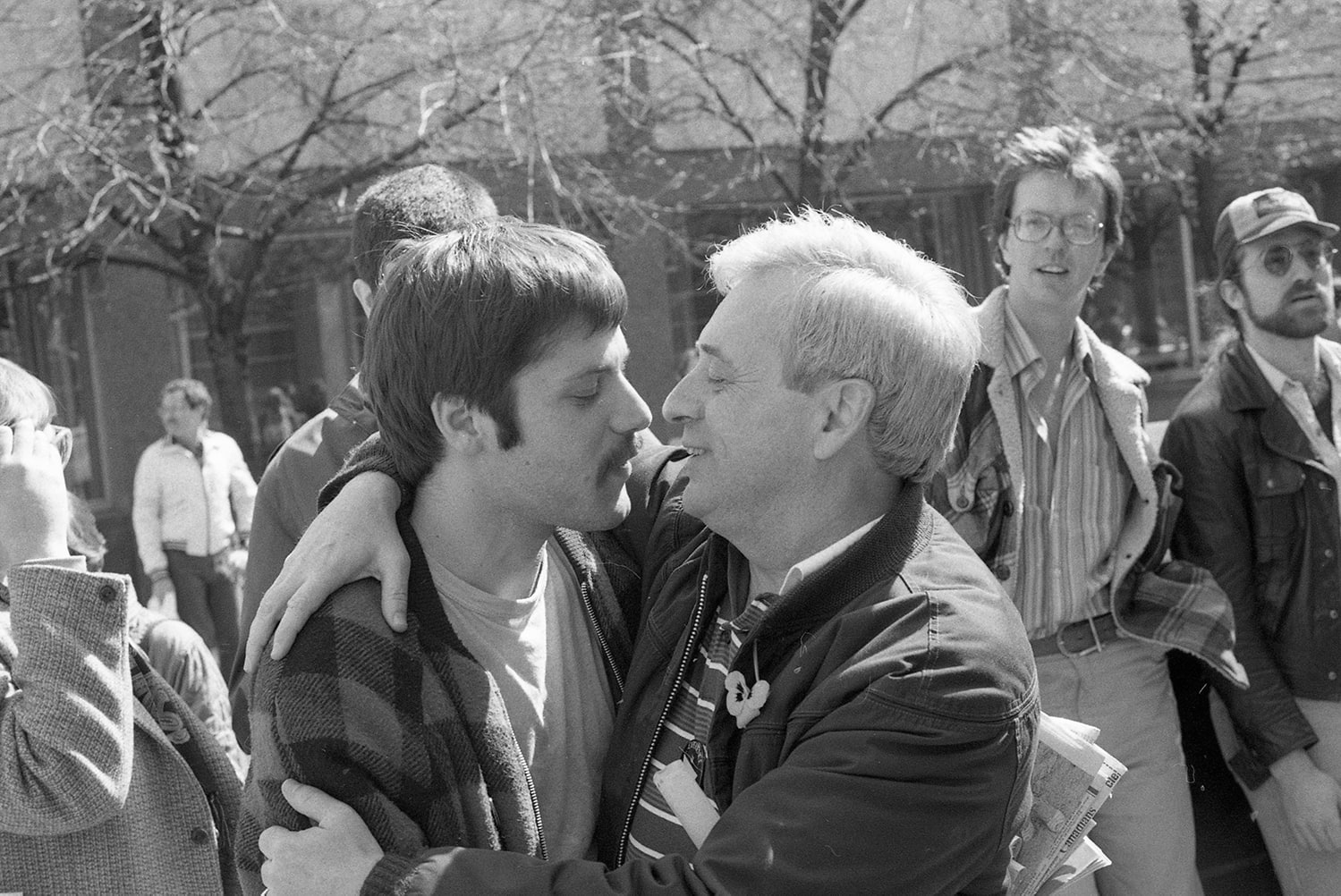 Artist Andy Fabo, left, and George Hislop, right, embrace. In 1978, the pair were charged as owners of a bawdy house when the Barracks bathhouse was raided. (Gerald Hannon/The ArQuives) 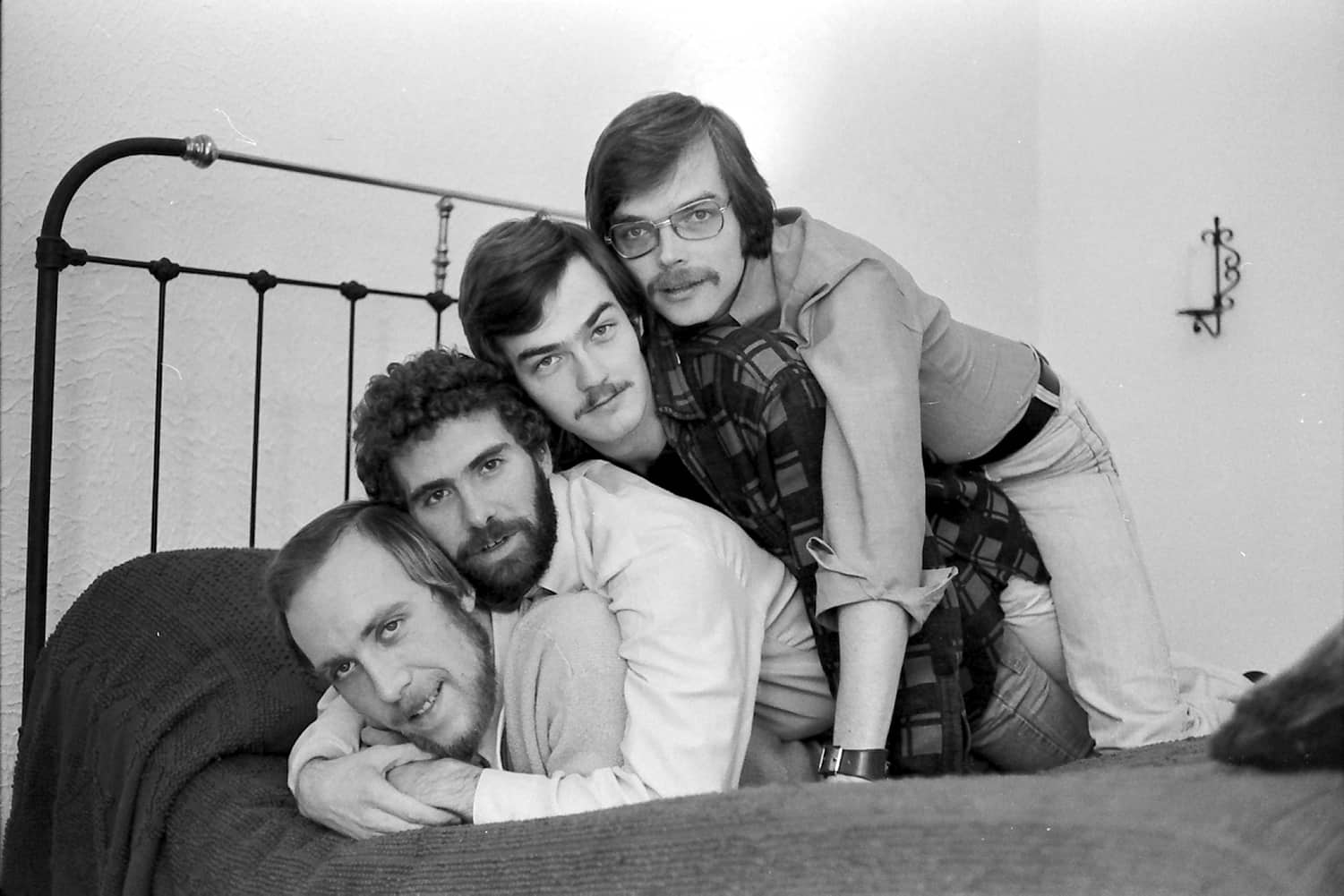 At the time, it was a radical move — one that had limitations. Afraid of being outed, some sat out of the camera’s view at meetings.

Some also pushed back on Hannon’s work for the Body Politic seeing it as too radical. They lived “satisfying, productive” lives in the closet, Hannon says.

“I was contemptuous then; I’m more understanding now,” he added. 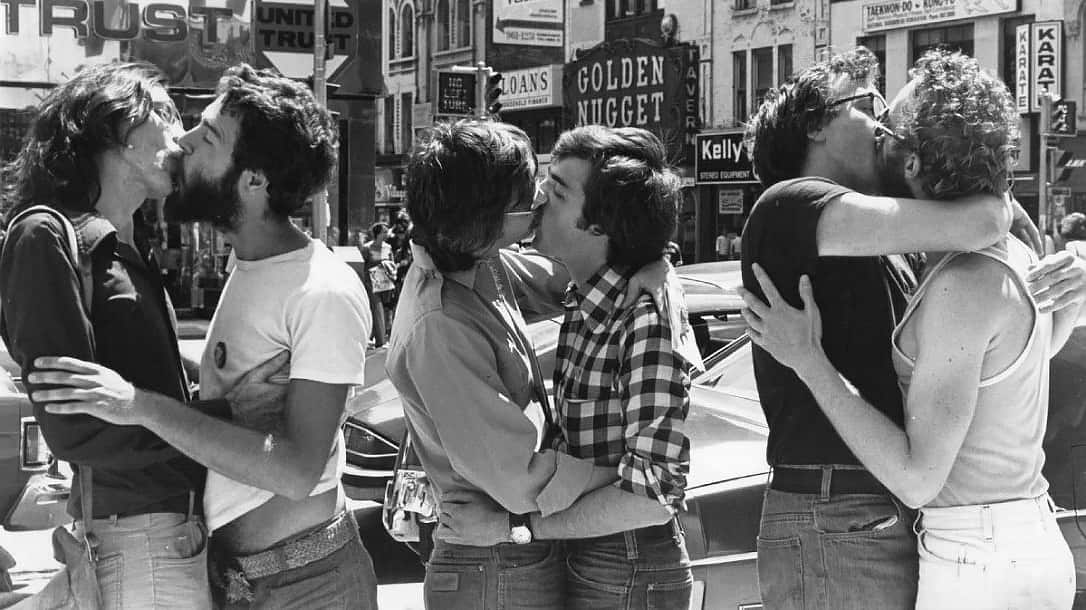 After two men were arrested in Feb. 1976 for kissing at the corner of Yonge and Bloor streets in Toronto, six activists staged a 'kiss-in'. (Gerald Hannon/The ArQuives)

More than 40 years on, Hannon looks back with joy at the photos. While they’re used to document struggle, they can also have an aesthetic value, he says.

“They can be a visual pleasure to look at in later years when the struggle may have moved on, but they’ll always echo fiercer days,” he said.

“It may have been a risky time to be alive, but I’m glad I was there for it.”