At the intersection of Chiefswood Road and Highway 54, along the edge of Six Nations, is a grand two-storey white house with green shutters, white lace curtains and a wooden extension. It stands between the banks of the Grand River and a main highway, a sentinel between two worlds. 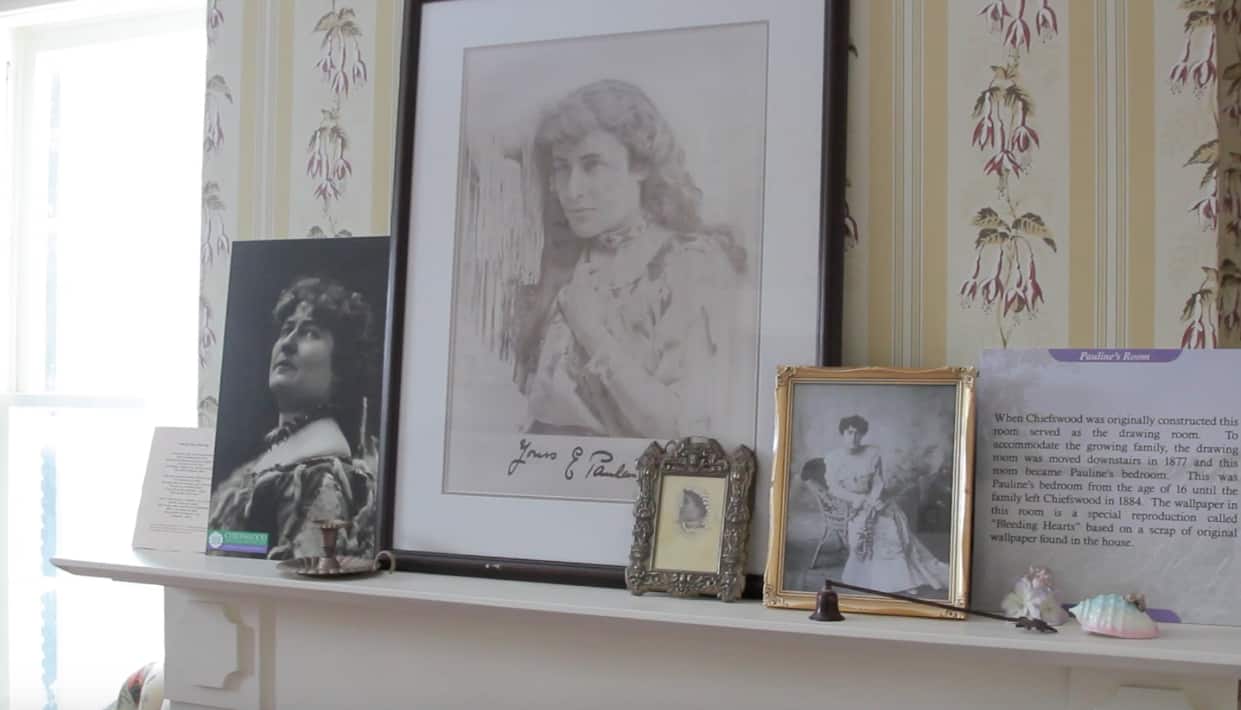 Unreserved visits the historic home of poet Pauline Johnson in Six Nations of the Grand River.

5 years agoVideo
2:39
Rosanna Deerchild and poet Janet Rogers share their favorite poem by Pauline Johnson. The two take a tour of her home on Six Nations that is now a national historic site. 2:39

At the intersection of Chiefswood Road and Highway 54, along the edge of Six Nations, is a grand two-storey white house with green shutters, white lace curtains and a wooden extension.

It stands between the banks of the Grand River and a main highway, a sentinel between two worlds. This was the home of one of Six Nations' most famous daughters.

E. Pauline Johnson was a Mohawk poet and performer, famous during the 19th century. A prolific writer, her works include Canadian Born, The Moccasin Maker and Flint and Feather.

Dubbed Chiefswood, the home was built in 1856 by her father, Mohawk Chief George H.M. Johnson, for his British bride, Emily Howell. Both families disapproved of the romance, forcing the couple to hide their relationship for years before finally marrying.

But they did not hide their cultures within their home. In fact, even its construction and location was no coincidence.

"When the Johnson family lived here, one of the things they did with the house is they managed to combine her father's background — who is Mohawk — and her mother, who is British," said Heather George, cultural co-ordinator at Chiefswood, which is now a national historic site.

"It's a very Victorian-looking home inside, but then there's some unique features of it that reflect George's side of the family."

Those unique features include two doors — one facing the river to welcome the community of Six Nations, and the other facing the main road to welcome settler communities.

Johnson (Onwanonsyshon) was a chief in the Six Nations Confederacy Council but also served as an official interpreter and informal diplomat between the Mohawk and Canadian governments. The couple would often host people from both sides of the river, acting as intermediaries.

The youngest of four children, Pauline Johnson was born at Chiefswood on March 10, 1861. She spent her childhood learning about both sides of her identity and paddling her canoe, a beloved hobby, up and down the river.

Raised in this in-between place, Pauline Johnson — or Tekahionwake (meaning double-life) — defied the Victorian era role of women by not marrying and having children. Instead, she travelled the world, reciting her work about survival, culture and resistance on stages from Canada to England.

"It's got great significance," said Janet Rogers, another Mohawk poet and performer from Six Nations.

"Not only for the fact that it's a house that doesn't look like any other house on the rez, today or even back in the early 1800s when it was built, but the fact that this iconic person was actually born here. So it's kind of hallowed ground for poets."

In fact, before there was Lady Gaga, Madonna and Cher, there was Pauline Johnson. She often started her performances in proper Victorian dress and ended it dressed in her handmade "Indian Princess" outfit, literally showing off the two worlds she moved between.

Walking through the creaky house, filled with family furniture, mementos and even Johnson's writing desk, Rogers paused and touched a portrait of the Mohawk poet, her own face reflected in the glass.

"She was absolutely living this kind of duality," she said. "Not resisting it but kind of embracing it. When you stop and think about it, I mean, we're all kind of doing that. Whether we're poets are not, as indigenous people we are forced to embrace a duality of sorts with our lives."