Anthony Johnson and James Makokis won the seventh season of Amazing Race Canada, and chose Team Ahkameyimok as their name during the competition. In this podcast exclusive, they explain the important role their languages play on and off reality TV. 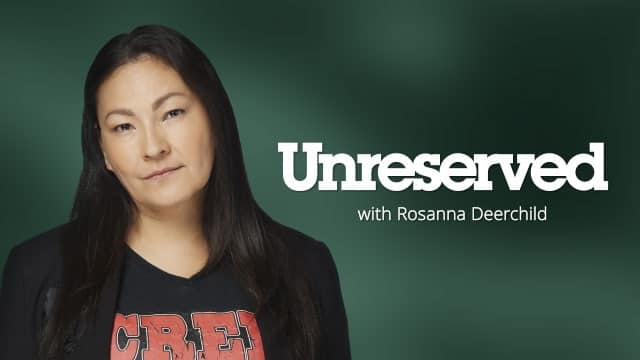 Unreserved19:10FIRST WORDS: Why Amazing Race Canada winners want you to learn Indigenous languages
Anthony Johnson and James Makokis won the seventh season of Amazing Race Canada, and chose Team Ahkameyimok as their name during the competition. In this podcast exclusive, they explain the important role their languages play on and off reality TV. 19:10

In celebration of their Amazing Race Canada win, Anthony Johnson and James Makokis uttered a sakowe, or cry of joy or excitement, on the mat during the finale.

For Makokis, who's Cree from Saddle Lake Cree Nation, and Johnson, who is Navajo from Kayenta, Ariz., language and culture has and always will be at the forefront of how they live their lives.

Even their team name — Team Ahkameyimok, which means don't give up in nehiyawewin, or Cree — is rooted in teachings.

"[It] refers to many people not giving up and persevering and continuing in the face of adversity," Makokis said.

Makokis faced a lot of challenges while going to medical school — including working for 36 hours straight during his residency and experiencing racism — but it was his strong connection to ceremony that kept him going.

His family would bring him home for a weekend and organize all sorts of ceremony to help him reestablish his connection to the land. Elders, sensing the difficulty Makokis faced, encouraged him.

"Being on the mat, and winning, was a win for them and many Indigenous people across the country."

But it was Johnson who came up with the name for the team — one that he said can apply to many other languages, too.

"The beauty of our name … is that Team Ahkameyimok isn't Anthony and James, Team  Ahkameyimok is every person out in the world who doesn't want to give up and wants to keep going," Johnson said.

The name was also important to encourage non-Indigenous people to learn how to say and use Indigenous words.

Johnson said he often hears from people both he and Makokis call "woke settlers" feeling like they shouldn't be saying Indigenous words because they've already taken enough from Indigenous people.

But both Johnson and Makokis want settlers to learn Indigenous words.

"When you're using someone's languages, it's an extension into someone's heart," Johnson said.

"But the cool thing is, many people already say many Indigenous words that they don't even realize," Makokis added.

The words Manitoba, Saskatchewan, Chicago and Mississippi are just a few of the examples Makokis rattled off as stemming from Indigenous languages.

It's just another reason why Team Ahkameyimok's name is important. Makokis was jokingly reluctant to admit his age, but said that people 40 and under, like him, are a part of the first generation in his community who don't speak nehiyawewin fluently.

"There is a huge pressure on us to retain our languages for future generations," Makokis said. "The retention of it and the transfer of it to the next generation is something that's hugely important. Very near and dear to our hearts."