In Olympia, Washington, they’re playing a new kind of youth soccer. To address the negative effects of competition, soccer is now being played without a ball. They’re calling it ‘ball-less soccer.’ (An idea that was first launched in Ontario.) 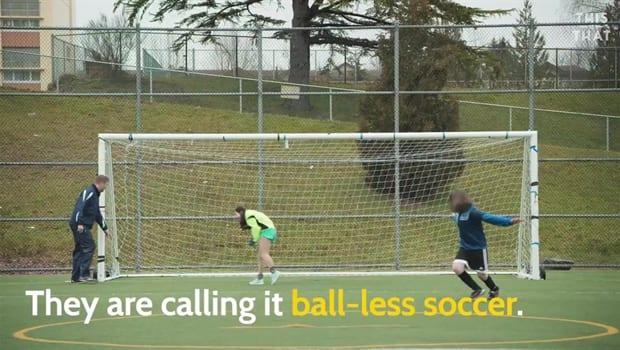 3 years ago
3:33
No ball means no goals. No goals means no losers. And with no losers there are no hurt feelings. 3:33

In Olympia, Washington, they're playing a new kind of youth soccer. To address the negative effects of competition, soccer is now being played without a ball. They're calling it 'ball-less soccer.' (An idea that was first launched in Ontario.)

"Here in Olympia we've been looking at how competition impacts youth and it's usually kind of negative, especially if you're on the losing team," said Helen Coyle, head of the Olympia Youth Sports League.

"So last year," she said, "we took away the notion of scoring, which meant there were no winners and there were no losers. But in many ways we felt that it just didn't go far enough. So we've actually taken away the ball."

Keith Shultz is a ball-less soccer coach. It is his job to keep track of where the imaginary ball is.

"Coaching ball-less soccer is very difficult from my perspective because I have to do a lot of imagining," he said.

"Any coach can coach a kid on soccer skills and having fun out there but the real challenge of my job as a coach in ball-less soccer is trying to keep track of where the ball is and coach the kids on how do you keep track of the ball and where is the ball."

If this program is successful, Olympia is considering removing the ball from some basketball leagues as well.