The Anishinaabe writer speaks with Shelagh Rogers on location in Vancouver about her poetry collection (Re)Generation. 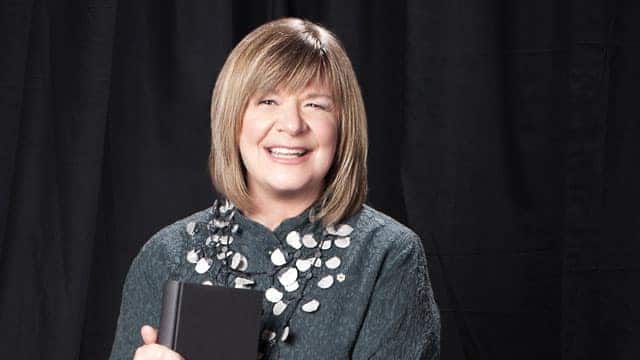 Akiwenzie-Damm is a member of the Saugeen Ojibway Nation Chippewas of Nawash Unceded First Nation on the Saugeen Peninsula in Ontario. She is the author of the collection of short stories The Stone Collection and wrote the story Nimkii for This Place: 150 Years Retold.

Her latest book is a collection of poems from throughout her career called (Re)Generation. She spoke with Shelagh Rogers at an event at the University of British Columbia in Vancouver, hosted by the novelist Michelle Good.

"I thought long and hard about what the title would be for the collection. How do you encapsulate years and years of your work? With the title, I wanted to bring the idea that generation after generation have been leading toward the things that I've been able to do. I'm just part of that line of people who've been working to bring Indigenous literature forward.

"And at the same time, there's that idea of generating growth, of creation — of making something new. And the regeneration is really gesturing toward reclamation of our cultural and traditional knowledge. I wanted to say that this is part of that movement to reclaim, to find restitution and the foundations for who we are and our lands, and to reclaim and bring that with us as we move forward."

"Kegedonce Press started as a way of just contributing to a group of Indigenous writers that I was part of. It grew out of that to help those writers. I just wanted to be able to use my knowledge of Indigenous literature and my connections with people to identify some things that I thought were important because I thought it would be really great to kick out those boundaries that were around Indigenous literature for so long.

We can bring our own literary traditions and aesthetics and ways of viewing the world forward.

"So many people thought of it as protest literature or nature literature, and I just wanted to dismantle a lot of that. I wanted to put forward the idea that our work is not marginalized — that we cannot be marginalized in our homeland. We are at the centre of things, and we can bring our own literary traditions and aesthetics and ways of viewing the world forward.

"I wanted to really look at that with the publishing company and find those gaps and those projects that maybe other people wouldn't take the risk on."

"What I've learned from some of my teachers is that righteous anger can fuel so much of our work, not only as writers, but as activists and as cultural workers. We can use that energy to create beautiful things to advance ourselves in our communities and our families. And so I try to tap into that anger.

Poetry is one of those ways that I try to create change and to put something beautiful out into the world where there is just far too much ugliness.

"I don't know how anyone could look at some of the injustices in the world around us and not be outraged by many of them. And so rather than lament it or just stew about it, my way of coping is to channel it into trying to find ways to create change.

"Poetry is one of those ways that I try to create change and to put something beautiful out into the world where there is just far too much ugliness."