U.K. will have a 'gun to its head' over Brexit resignations, says politics professor

The resignations of senior U.K. politicians show divisions over how Theresa May's government wants to approach Brexit, and the EU could use that to strengthen its negotiating hand, says a politics professor in Britain.

Divisions over 'hard' and 'soft' approach to Brexit centre on trade

Turmoil within the U.K. government may present an opportunity for leverage for the European Union's Brexit negotiators, according to a politics professor in Britain.

After meeting with ministers Friday, British Prime Minister Theresa May said she had secured collective agreement on her Brexit plan. She wants to keep the U.K. and the EU in a free-trade zone, committing Britain to maintaining the same rules as the bloc for goods and agricultural products.

Her plan for a "softer" Brexit — as opposed to a "hard" departure that would more aggressively cut EU ties — exposed the divide within her cabinet. 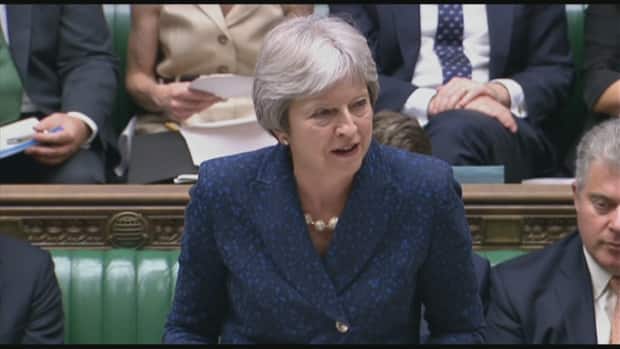 3 years ago
1:04
'This government is not capable of securing a deal,' says Labour Party Leader Jeremy Corbyn 1:04

By late Sunday, Davis had resigned, saying he couldn't deliver on the plan. He was quickly followed out the door by Johnson, who reportedly compared May's plan to "polishing a turd." In his resignation letter, he wrote that Britain is headed for "the status of a colony."

May appointed new ministers within hours, and will push forward with her plan, saying it is "the right Brexit."

[Hard Brexiteers want] a clean break in the belief that there is somehow this kind of global buccaneering future for the U.K., detached completely from previous alliances- Tim Bale, professor of politics at Queen Mary University of London

To leave the EU on schedule in 2019, he said, a deal would have to presented to the European Parliament for ratification by the end of this year.

Despite two years passing since the referendum, issues such as immigration and the Irish border still need to be resolved, while trade is also a key question.

"It's still very difficult to know what is going to happen not just to goods but also to services, which have been left out of this [weekend's] agreement," he said.

"Given that they represent 80 per cent of the U.K. economy, that is very, very worrying for some businesses."

Proponents of a hard Brexit want a clean break, Bale said, "in the belief that there is somehow this kind of global buccaneering future for the U.K., detached completely from previous alliances."

Britain is an important trading partner for Canada, and there have been calls for a bilateral agreement between the countries post-Brexit. But until negotiations over the U.K.'s departure are complete, the country cannot begin formal talks about new trade deals outside the bloc. What does the latest Brexit blow mean?

Christophe Bondy, who has worked on the CETA trade deal between Canada and the EU, has argued that a "hard" Brexit has "never shown any merit ... from a trade law perspective."

Speaking to Vassy Kapelos on CBC's Power & Politics, Bondy said that hard Brexiteers want to break away "in order to negotiate trade deals, as though the EU weren't negotiating those already."

The desire for a "hard" Brexit assumes that it is easy to make deals around the world, in "places like India, or China, which are actually quite difficult," he said.

Tim Bale also cautioned against relying on the U.S. for trade.

"Donald Trump has shown himself to be someone who is quite willing to tear up trade agreements, and not be willing to get into them if he can avoid them," he said.

The U.S. president is scheduled to arrive in Britain Thursday, after a NATO summit in Belgium. Thousands of protesters are expected to join demonstrations, including plans to fly a blimp over parliament portraying Trump as an orange, snarling baby.

With files from Reuters. This segment was produced by The Current's Kristin Nelson and Richard Raycraft.