Ontario Premier Doug Ford is undermining Canadian democracy by invoking the notwithstanding clause, according to Andrea Horwath, the leader of the official opposition.

The notwithstanding clause is not the appropriate measure for Ontario Premier Doug Ford's "vendetta" against Toronto council, according to Andrea Horwath.

"It's a very, very serious matter to override our fundamental rights and freedoms," said Horwath, the leader of the Official Opposition and Ontario's NDP.

"That's why no premier has ever done that in Ontario, that's why many former — even Conservative — premiers are saying that this was the wrong thing to do, for the wrong reason, because of a petty spat that he's having with city councillors in Toronto that he doesn't like," she told The Current's Anna Maria Tremonti.

Ford announced his intention to use the clause Monday, after a court decision struck down his Efficient Local Government Act, which would cut the number of council seats from 47 to 25. The constitutional provision allows authorities to override sections of the Charter for a five-year period. The Current requested interviews with Ford, Stephen Lecce, a Conservative MPP and parliamentary assistant to the premier, as well as Stephen Clark, the Minister of Municipal Affairs and Housing, but received no response.

Horwath said that the judiciary's role is to ensure that our democracy is upheld, and to "prevent tyrannical, dictator-type politicians from running roughshod over our rights."

But Conservative strategist Jason Lietaer argues that Ford's government is pursuing what they deem a priority and questioned the original judgment against the bill.

"I think most constitutional experts think this was a pretty emotional decision, written with significant bias, that doesn't actually follow, you know, who's in charge of municipal boundaries," said Lietaer, who worked in Stephen Harper's war room in 2011.

On Wednesday, Horwath was among NDP MPPs removed from the Ontario legislature, as they protested Ford's reintroduction of the bill. Protesters in the gallery were also removed by security. 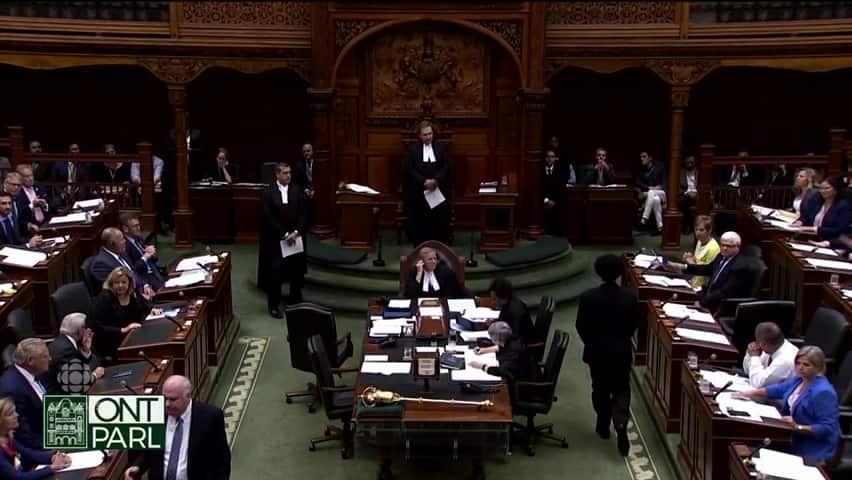 2 years agoVideo
2:18
NDP MPPs banged on their desks and were escorted out one by one at the Ontario legislature Wednesday afternoon as they tried to delay the reintroduction of the notwithstanding clause bill to cut the size of Toronto city council. 2:18

"I have never seen literally senior citizens be dragged out of the gallery in handcuffs," said Horwath.

"It was a sad day for Ontario."

Horwath said the protests were independent of each other, but Lietaer argued that it was all "a good public relations stunt."

"I think they wanted a confrontation and they got it, and it was unfortunate," he said.