"I'd be very surprised if this is not an attack by al-Shabab," former CSIS analyst Phil Gurski says about the Mogadishu bombing which killed over 300 people.

More than 300 people were killed this weekend in the deadliest single attack on civilians in Somalia's history.

A massive truck bomb exploded in the nation's capital, Mogadishu, on Oct. 15, targeting a busy street near key government ministries.

Another 300 people were injured in the blast. The death toll is expected to rise, as many people have been succumbing to their injuries and rescue workers continue to find more bodies.

The Somali government blames al Qaeda-linked extremist group al-Shabab for the explosion, although no one has yet claimed responsibility.

Former CSIS analyst Phil Gurski agrees with the Somali government and suggests al-Shabab is behind this "catastrophic" attack.

"Despite the fact that a claim has not been made to date, I'd be very surprised if this is not an attack by al-Shabab," Gurski tells The Current's Anna Maria Tremonti.

"They are, by far, the bigger of the groups, and they have been very active of late with both suicide bombings," Gurski says.

"There have been armed assaults against Amisom, which is the African Union military mission in Somalia; and al-Shabab is even taking control of some towns, albeit briefly, when troops either flee or are not there."

The Horn of Africa nation has been battling a bloody insurgency waged by al-Shabab for more than a decade. Some 20,000 African Union forces are stationed in the country to help. And in the past year, as attacks waged by al-Shabab have grown more frequent, the U.S. has stepped up drone strikes against the group.

Last week's meeting between the head of the U.S. Africa Command, the president of Somalia and the Somali defense minister makes some suspicious of the timing of this attack, drawing a connection between the explosion and U.S. intervention.

"It's hard to say if this attack is a direct retribution for a U.S. visit, or any kind of movement within the Somali government," he says.

The expert suggests the expected resignation of the head of Somali intelligence will prompt more delays in the investigation. 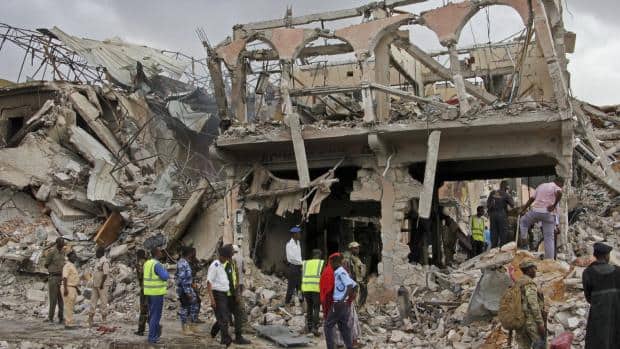 Gurski tells Tremonti the sheer scale of the attack and the number of victims is "almost hard to imagine."

"Some reports that I've read say that there are well over 100 bodies that are burned beyond recognition," he says.

"So this was a massive, massive terrorist attack."

Listen to the full conversation near the top of this web post.

This segment was produced by The Current's Idella Sturino.