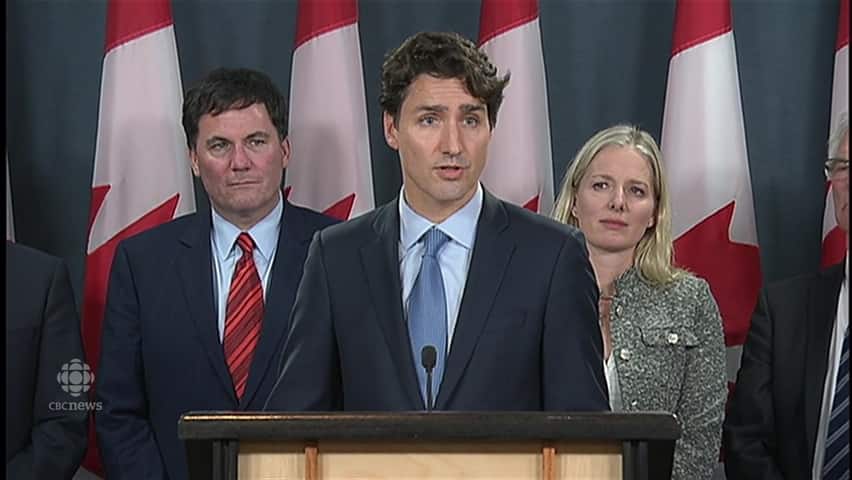 Trudeau and Ambrose on pipelines

After much delay and speculation, Prime Minister Justin Trudeau announced his government's approval of two contentious oil pipelines, and the rejection of a third.

Trudeau also announced the rejection of the Northern Gateway pipeline and promised to enact legislation that would ban oil tankers from B.C.'s north coast.

"If I thought this project was unsafe for the B.C. coast, I would reject it," Trudeau said in his announcement yesterday.

"This is a decision based on rigorous debate on science and on evidence. We have not been and will not be swayed by political arguments, be they local regional or national. We have made this decision because we are convinced it is safe for B.C. and it is the right one for Canada," he said.

The reaction from environmental groups

"This pipeline is not needed unless Canada plans to blow past its climate commitments," Jessica Clogg, executive director and senior counsel with West Coast Environmental Law, tells The Current's guest host Kelly Crowe.

"This decision was about politics," she adds.

First Nations communities along the pipeline routes have also expressed their dismay. Rueben George, head of Tsleil-Waututh First Nation's Sacred Trust Initiative, pointed out that the existing Trans Mountain pipeline has 82 recorded spills in its history.

"I think he should be honest about it," George told Crowe, referring to Trudeau's claim that the pipeline was safe.

The reaction from the oil industry

Tim McMillan, president and CEO of the Canadian Association of Petroleum Producers, sought to assuage fears about the pipeline's safety telling Crow "in our industry, we measure everything."

"Safety is paramount to how we operate," says McMillan.

He adds that the pipeline would provide a significant boost to Alberta's economy and the Canadian oil and gas sector in general.

"The announcement reaffirms that Canada is a good place to invest."

"The cabinet looked at what we thought was exhaustive scientific advice. We had information from extensive consultations with Indigenous groups," LeBlanc tells Crowe.

"We had a report from the National Energy Board, and we came to a decision that we thought was in the best interests of the country."

Listen to the full segment at the top of this post.