Jackie Speier was shot 5 times during the Jonestown massacre. She says it made her fearless

Jackie Speier was shot five times as she tried to help defectors leave the Jonestown commune in Guyana in 1978, on the same night that more than 900 people died after drinking Flavour Aid laced with poison. On the 40th anniversary of the massacre, Speier reflects on the effect that looking death in the eye has had on her life.

As she lay bleeding on the tarmac of an airstrip in Guyana, Jackie Speier was sure she was dying.

"I looked at my body and there was a bone coming out of my right arm, and my whole right thigh was blown up, with a hole the size of a football," Speier, now a U.S. Democrat congresswoman, told The Current's Anna Maria Tremonti.

"I said the act of contrition, and waited for the lights to go out," she said.

It was November 1978, and Speier had travelled to the South American country with her boss, U.S. Congressman Leo Ryan. Along with several journalists, they were investigating reports from Ryan's constituents that family members had been brainwashed by a man called Jim Jones, and were being held at his commune at the Peoples Temple Agricultural Project, better known as Jonestown.

Speier, who was 28 at the time, remembers arriving to find an impressive settlement carved out of the jungle, where people seemed content. But it soon became apparent there was something "behind the curtain," she told Tremonti, as people began to pass notes saying they were being held against their will.

Jones had been subjecting his congregation to sexual and physical abuse, she added.

"They all became very fearful of leaving the Temple because they thought that something untoward would happen to them."

On Nov. 18, Speier and her group were trying to load defectors onto a plane at a Port Kaituma airfield when Jones's men attacked them. Ryan and several of the journalists were killed. Speier was shot five times. 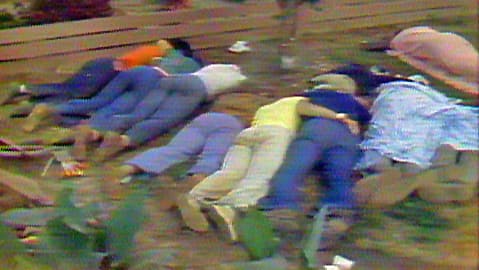 42 years ago
10:12
An American religious cult, the People's Temple, shocks the world after committing mass suicide in Guyana. 10:12

Seven miles away, Jones was forcing the members of the Peoples Temple to consume drinks laced with cyanide. More than 900 people died that night, in what became known as the Jonestown massacre. In images that shocked the world, hundreds of dead bodies lay prone around the commune. Investigators found that infants and children had been injected with cyanide, and Jones himself was found shot to death.

But as Speier waited for the "the lights to go out," she realized that she wasn't dead yet. And so she resolved to live.

"I saw this image of my grandmother, and I thought to myself: 'I don't want her to live through my funeral, if I can avoid it.'"

Speier spent 22 hours lying on the airstrip, without medical attention. When help finally arrived, she was airlifted to hospital, where doctors stabilized her.

She credits Robert Flick, an NBC producer, with getting her through the night. After the rest of the injured retreated to a nearby bar to seek help, he made trips back to check on her.

"He would bring a bottle of Guyanese rum, and I would take some swigs of that. That's how I dulled the pain."

She often thinks about Ryan, who she calls her mentor, but also about the more than 900 people who died that night.

"I actually recoil when people call it a mass suicide, because it wasn't, it was a mass murder," she said.

"There were armed guards all over the place, [the congregants] were subject to mind control, and the result was they had no choice."

She hates the phrase "to drink the Kool-Aid," which became shorthand for blind devotion after the events at Jonestown.

"Most people don't appreciate the history of where that comes from, and what 'drinking the Kool-Aid' meant for all those people ... so I'd love to scrub it from our lexicons."

What's more, it isn't an accurate phrase:  according to most reports, members drank a lesser-known drink mix called Flavour Aid, not Kool-Aid.

Living to fight on

When she was released from hospital, Speier found herself struggling to "to live with this new badly scarred body, and find a purpose to move forward in life."

Despite still being badly wounded, she ran for Ryan's seat in the U.S. House of Representatives.

"It forced me to get out of my gloom and start focusing just on myself," she told Tremonti.

There is a fearlessness that you acquire when you've looked death in the eye.- Jackie Speier

She lost the race, but didn't give up the fight. In 1986, Speier won a seat on the California State Assembly. She became a California state senator in 1998, and won Ryan's old seat by becoming a congresswoman for California in 2008.

Her ordeal at Jonestown has also driven her political career.

"There is a fearlessness that you acquire when you've looked death in the eye, and have lived," she said.

"In all of my legislative work I've taken on some pretty powerful interests … and I don't know that I would have been able to have done those things, had it not been for Guyana."

Written by Padraig Moran. Produced by The Current's Howard Goldenthal and Danielle Carr.