'Desperate Housewives of the White House': How has the media covered Trump's first year?

Has the media been too concerned with the trivial aspects of Donald Trump's White House, at the cost of covering the real issues that are affecting people's lives?

One year — and thousands of tweets — later, how has the media fared in covering Donald Trump's presidency?

The news has swung from claims that he eats McDonald's to avoid being poisoned; to whether Melania's shoes were the right footwear to meet flood victims; to analyzing late-night Twitter storms, often at the cost of reporting on policy.

"I think we can occasionally get too distracted by the sort of reality show part of this," says Daniel Dale, the Toronto Star's Washington correspondent.

"I mean it's irresistible, but I think we can fail on occasion to delve deep into some serious policy change, because we are distracted … by something Trump is tweeting or saying."

Dale says there has also been an unwillingness "to call out Trump's serial dishonesty, his serial lying," with fact checking still relegated to occasional moments rather than a hallmark of coverage.

There is a "surplus of coverage on Trump voters" he notes; media outlets that did not cover Trump's voter base before his election are now too focused on it.

"There's sort of this cliched story now, you know, Trump voters in coal country or the Appalachians or some pro-Trump place — they still love Trump."

That focus takes up resources that could be used to explore the opposition to Trump, he says, especially as that movement grows.

Trump: *Overtly racist statement*<br>CNN: Trump’s a racist.<br>MSNBC: Trump’s always been a racist. <br>Daily Stormer: We love our racist!<br>WSJ: Dude. You’re not making this easy for us.<br>NYT: Is the President a racist? Coal miners don’t think so. <br>Fox: Hillary is the real racist.

But it hasn't all been bad, Dale says.

"I think the investigative reporting we've seen has really been top-notch, world class," he tells The Current's Anna Maria Tremonti. "We've had incredible reporting about what's going on with the Russia investigation, and what in fact the Trump campaign did in relation to dealing with the Russian government. We've had really deep looks at the impact of Trump policy. We've had inside looks about what's going on in basically the president's head, in his White House."

Victor Pickard, a media studies scholar and professor at the University of Pennsylvania, thinks it's been a mixed bag, but that there has been a shift in how journalists handle the White House.

"There's a longstanding critique of professional journalism in the U.S. for its over-reliance on official sources, being overly deferential toward political leads," he says. "I think what we're seeing during the Trump era is that this norm has largely gone out the window."

We end up talking about what I call the Desperate Housewives of the White House… about who's in and who's out?- Jay Newton-Small

Jay Newton-Small agrees. She was previously the Washington correspondent for Time Magazine, and says the coverage of Trump's presidency feels very different from when she covered the Obama or George W. Bush eras.

"There was still a sense of 'you needed these people'," she says. "You needed them down the road, you couldn't really burn any bridges because you might need them for sourcing for another story and you have to be careful."

"These days there's just this no-prisoners sort-of approach to covering the Trump White House. You have colleagues of mine who overhear conversations, and report on them, from top White House officials and lawyers. That's really unprecedented."

"I would also say that there is this sense of loss of decorum, loss of civility where everything is almost too hostile."

"It's like a kind of game of gotcha that goes on all day long. And that is also to be lamented in many ways." 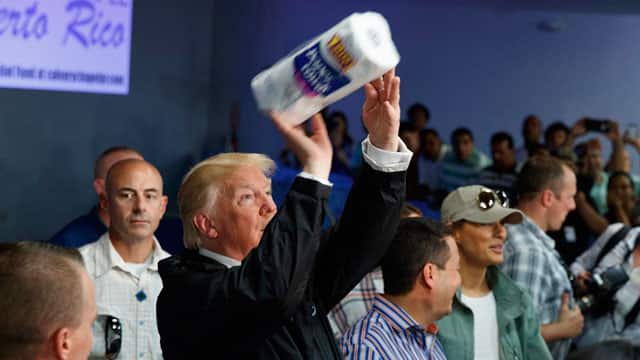 When Hurricane Maria devastated Puerto Rico, President Trump visited the island and was filmed throwing paper towels into a crowd of survivors.

After heavy criticism, he defended himself:

Newton-Small says that serious issues like Puerto Rico get lost in what becomes "style over substance."

"The number of weekends where we've been on television talking about his tweets," she says, "instead of talking about really serious issues about the Russia investigation or about his failure to repeal Obamacare."

"We end up talking about what I call the Desperate Housewives of the White House… about who's in and who's out?"

"Is Anthony Scaramucci in; is Reince Priebus out? What does everyone really think about Steve Bannon, is he friend with Trump or not?"

"All of that is completely, actually meaningless and has very little to do with the actual policy or governance."

When the president tweets, he puts himself on record. And that is important, Picard says.

"We need to see critical coverage of that," he tells Tremonti. "But we also need contextualization, we need to be able to really show that this tweet just completely threw off the news narrative for the next 24 hours and we've already forgotten about the last scandal from two days ago."

"They can't be ignored. But I think we could try to regain some perspective."

This segment was produced by The Current's John Chipman, Howard Goldenthal, Lara O'Brien, and Amra Pasic.