At a time when the real world faces wars, humanitarian crises, and hate propaganda, proponents of so-called empathy games say the video games can create new levels of empathy and understanding. But others are skeptical of the claim.

It's not your average video game.

Imagine it's 1979. Revolution is brewing and you're on the streets of Tehran experiencing it all from the perspective of a young photographer named Reza.

The game 1979: Revolution is one of a growing number of so-called empathy games that aims to give players a real understanding of what it's like to get caught up in a revolution,  or live life as a transwoman, or have a young child with cancer.

Empathy, or serious games as they're also called, have been growing in popularity. Just recently UNESCO — the United Nations' cultural agency — released a new game of its own.

Game designer Paul Darvasi is the author of a paper commissioned by UNESCO, How Digital Games can Support Peace Education and Conflict Resolution, and tells The Current's Anna Maria Tremonti how empathy games can create a unique perspective that goes beyond what literature and TV can do.

"The difference with a video game, or a digital game, is that you actually enact the actions of your character — the world changes according to your actions in the game," Darvasi explains.

"And as a result of that it has a more profound psychological, emotional and cognitive resonance, and therefore it has the possibility or the potential to leave a much stronger imprint with the individual."

Darvasi shares the example of a game called Hush, developed by a University of Southern California student in 2008 where a player takes on the role of a Rwandan mother who is hiding from a Hutu patrol during the civil war. The point of the game is simply to pacify your child, to sing a lullaby so that it doesn't alert the Hutu patrol to your presence.

"The game provokes a lot of anxiety because outside you could hear screams and people begging for their lives and bursts of machine gunfire," Darvasi tells Tremonti.

"And while this is going on the player has to ... play a rhythmical game on the keyboard in order to maintain the lullabye." 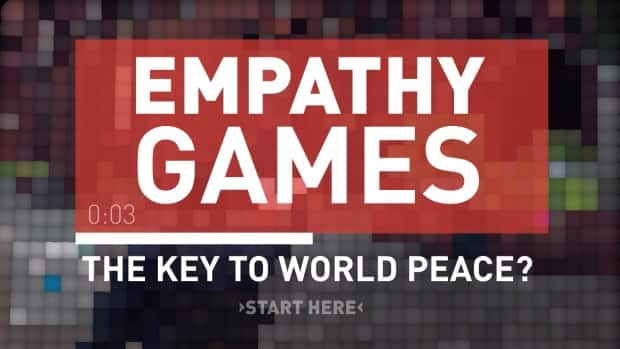 Could video games be the key to world peace?

4 years ago
2:35
Why the UN is looking into using games to build empathy and understanding. 2:35

Darvasi states a game alone won't guarantee that empathy will come from it.

"Players often play the game to win. They're not really interested in the story, or the text, and they're just kind of playing through the mechanics in order to get to the end. So I feel it's very important that if that is a desired outcome in an educational environment or for some other purpose it's important to contextualize gameplay."

Mary Gordon, founder and president of Roots of Empathy — a classroom program that aims to increase empathy, and decrease aggression and bullying — doesn't believe the claim that video games will make a person more empathic.

However she does believe its validity is "a massive contribution to our overall knowledge."

"Generally speaking what the games do is they help an individual take a different perspective and maybe take the perspective of whoever is in the video."

"It's the feeling part of a person connecting directly face to face experientially with another person. And that's why they say empathy develops in the first relationships in life."

This segment was produced by The Current's Willow Smith and Liz Hoath.