Police shootings of unarmed black men are a Canadian problem too, says author

The shooting death of an unarmed black man in the U.S. has reignited criticism of police use of force, but an author argues that the issue is present in Canada, too.

In the wake of another fatal police shooting of an unarmed black man in the U.S., a Canadian writer says the issue isn't confined to south of the border.

Stephon Clark, a 22-year-old father of two, was shot and killed in his grandmother's back yard in Sacramento on Sunday night. Police mistook his cellphone for a firearm. 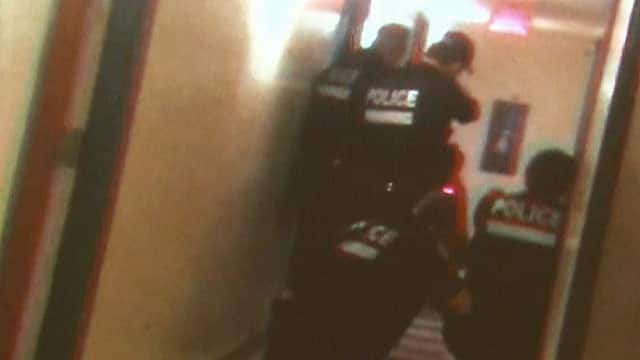 3 years agoVideo
2:48
Disturbing video released by the family of Pierre Coriolan, shows the final minutes leading up to a deadly police shooting. Coriolan was shot and killed in the hallway outside his Montreal apartment on June 27, 2017. Officers were responding to complaints that Coriolan was smashing things and yelling inside his apartment 2:48

"We need to realize that this is very much a Canadian issue as well," says Robyn Maynard, author of Policing Black Lives: State Violence in Canada from Slavery to the Present.

She points to the death of Pierre Coriolan as an example.

Police were called to the 58-year-old black man's Montreal apartment last June after neighbours complained he was yelling and smashing things inside his home.

"[He] was in the midst of a mental-health crisis. Then the police arrived and shot him with a taser and then with rubber bullets and then with live bullets."

He was pronounced dead in hospital later that day.

"Black people's ability to circulate in public space is… very different than that of white Canadians," Maynard says.

"We see a climate of hostility that black communities are still experiencing by the police that at times does escalate to excessive force and even to killing."

She adds that black and Indigenous people in Canada are more likely to be stopped by the police on the street, pointing to reports from Toronto, Halifax and Edmonton.

Tom Stamatakis, president of the Canadian Police Association, says it's "a bit of a stretch" to suggest that Canada has a problem comparable to the U.S.

"Police in Canada have embraced the notion of community policing and public engagement for many, many years."

Canada has a different gun culture, he adds, adding that police forces here are subject to more independent oversight.

"The police use force in less than 1 per cent of our interactions with the public, on a year-to-year basis," he says.

But for Maynard, there is still a disproportionate number of black and Indigenous people involved in police interactions.

While visibility has improved, she says, there remains a problem of accountability.

"There's too little change. There really is an overall climate of impunity."

Listen to the full conversation at the top of this page, which also includes an interview with Washington Post reporter Wesley Lowery and a debate between a sheriff and former police officer on the situation in the U.S.

This segment was produced by The Current's Pacinthe Mattar and Saman Malik.