Robot experts say it's time to deal with the ethics of sexual robotics since the advanced technology has implications for human intimacy and our evolving relationship with robots.

The growing industry has advanced sexual robotics using artificial intelligence to make it possible for robots to move limbs and talk. They're so lifelike, they can even fake an orgasm.

A new report from the Foundation for Responsible Robotics has examined the burgeoning sex-tech field, and it suggests it's time to think through the ethics of "pleasure bots."

De Montfort University's Kathleen Richardson, a robot ethicist, is concerned about the influence of sexual robotics on human intimacy and gender inequality.

She co-founded the group Campaign Against Sex Robots and believes there's a fundamental separation between a man and machine that removes the possibility for an authentic relationship between the two.

Richardson warns sex robots are based on a "very dehumanizing practice" and interrupts the development of empathy.

"People are treated as sex objects, where people's bodies are exchanged around the world."

But Aimee van Wynsberghe, co-director of the Foundation for Responsible Robotics, argues that there is another side to sex robots—where, in some instances, it can prevent objectification of women.

"You could think about people who feel uncomfortable going to a prostitute because they're putting another human being in that position," she tells The Current's summer host Mike Finnerty.

Van Wynsberghe explains when Japan established the first sex doll bordello, it was very popular. She suggests this new advanced AI sex robot could be a good solution to the discomfort some people feel about relying on prostitution for sexual gratification. 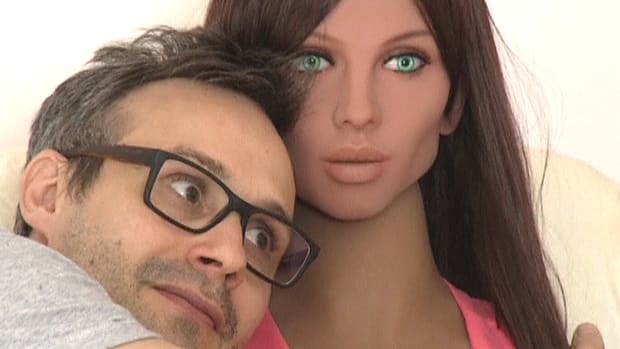 Sex robot creator gives tips on getting one interested in you

4 years agoVideo
1:11
'If you interact with her romantically, you can get her to actually be interested in sex with you': Sergi Santos 1:11

She tells Finnerty that sex robots can meet the needs of a broad spectrum of individuals.

"You can think about these robots as a therapeutic tool. You can think about them as being used for individuals who have suffered a traumatic experience, who have been the victims of rape and who don't feel comfortable having sexual contact with humans at the moment; and this could be something to allow them to regain confidence, to practice, if you will, so that they feel comfortable."

Van Wynsberghe's hope is that the industry will pick up on the many uses for sex robots and broaden the design to reflect a more realistic woman.

"Right now, because of the limited amount of interest in these toys, it's much more of a pornographic representation of women. So, you know, a certain breast size and certain hair length and very made-up," says Van Wynsberghe, adding that potential features could include cellulite or "space in the belly that makes it look like they've had a child."

"We have the technology that's started, and now it's time that we engage the general public and the policymakers to decide where do we want this technology to go, both in terms of design and implementation."

​Listen to the full conversation at the top of this web post.

This segment was produced by The Current's Willow Smith, Julian Uzielli and Ashley Mak.