The controversy around SLĀV — a show about slave songs with a predominantly white cast — plays out against the complexity of French-Canadian identity, and a tendency to erase Canada's history of racism and slavery, argues George Elliott Clarke.

The uproar about SLĀV — a Montreal show about slavery with a predominantly white cast – is rooted in some Quebecois' view that their national identity has much in common with the African-American civil rights movement, according to poet George Elliot Clarke.

Quebecois Nationalists view the African-American struggle as "a kind of preface to their own struggle to achieve greater sovereignty — greater respect — vis-à-vis English Canada," said Clarke, an English professor at the University of Toronto and former parliamentary poet laureate.

But that identification can be used to ignore racism within Canada, he said, pointing to arguments made in Nègres blancs d'Amérique, a 1968 book by Pierre Vallières.

SLĀV, a show featuring African-American slave songs, was part of this year's Montreal's International Jazz Festival. Most of the performers on stage were white, including the show's star and co-creator, Betty Bonifassi, and its renowned director, Robert Lepage. After protests and accusations of cultural appropriation, organizers cancelled all remaining performances and apologised to those who were "hurt" by the show.

Bonifassi defended the project in an interview with the Montreal Gazette, saying: "We don't talk about black and white in the show. We talk about human pain, experienced together. All cultures and ethnicities suffer the same."

Clarke said that the creators displayed an unfortunate lack of forethought, and cited another of the arguments in Vallières' book: there is no anti-black racism in Quebec.

"This is a view ... still held by many white Quebecois," he said, "despite the fact that there is a long and deep history of racism in Quebec, as well as in the rest of Canada."

Clarke pointed out that the origins of Quebec were "a slaveholding society," and "there were more slaves in Quebec, or New France, than there were in any other part of the country."

He argued that SLĀV was a missed opportunity to support black voices.

"Certainly given the great fame of Mr. Lepage and others, they could have parlayed that cultural power into helping to empower currently underrepresented black performers and black artists," he said.

The subject matter of the show — slave songs, or spirituals — reflect the sorrow, grief and pain of the slave centuries, Clarke said.

"But at the same time these were also songs about eventual triumph, about victory about overcoming," he said.

He argues that the show could have been an opportunity to explore "repressed" black history in Canada.

"This is Canada. We have a whole different situation in terms of racial relations — which is the denial of racism, the denial of slavery," he said. 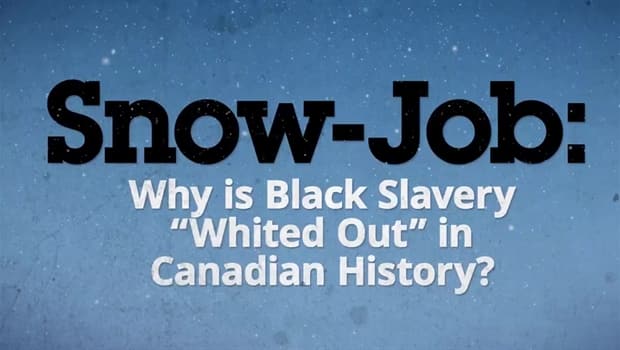 3 years agoVideo
3:00
Snow-Job: Why is Black Slavery “Whited Out” in Canadian History? An Incorrect Sestina 3:00

Comparisons between Quebecois and African-American struggles were a two-way street, with even Malcolm X once writing about the "fanatical struggle" of Quebecois to empower themselves.

A production like SLĀV would be seen as an act of appropriation in the U.S., according to Ingrid Monson, a professor of African-American Studies at Harvard University.

"It would remind people of minstrelsy, and the idea that white Americans performing cannot fully represent the African-American experience," she told Finnerty.

Collaborations are possible, she said, but "you need to work very closely with African-American performers and communities that are represented."

That's even more important during periods of tension when "racial walls go up," she said.

A kind of mistake that many white Americans make ... is that you identify so much with the cause that you think you can represent it. - Ingrid  Monson

A common mistake is for people to think they identify so much with a different community's cause, or historical struggles, that they think they can represent it, she said.

"I think that's the line that liberal white people and people who are sympathetic with anti-racism need to recognize," she said.

"It's one thing to identify with it, but when you're doing projects you've got to bring people on board who have that as their personal experience."

This segment was produced by The Current's Pacinthe Mattar and Samira Mohyeddin.