Thai boys' recovery could be put at risk by media spotlight, says author who worked with Chilean miners

The soccer team rescued from a cave in Thailand have a long recovery ahead of them, but there may be lessons to learn from the case of the Chilean miners, who were tapped underground for 69 days in 2010.

It's not enough to focus on the rescue and forget what comes after, says Jonathan Franklin

The boys rescued from a Thai cave will need long-term support to overcome their ordeal, but their 15 minutes of fame could also put their mental health at risk, warned author Jonathan Franklin.

"It's when the media turns the lights off that things often get complicated," said Franklin, a journalist who interviewed many of the Chilean miners trapped underground for 69 days in 2010.

"When people come back there's all sorts of ways in which they're often abandoned or they're confused," he told The Current's guest host Duncan McCue.

"I think it's really important to not just cheer and say: 'We saved their life!' but to focus on the mental health part of this, which is obviously a lot more invisible."

Twelve boys — the Wild Boars soccer team — and their coach got trapped on June 23 when they set out to explore the vast cave complex in northern Thailand, but a rain-season downpour flooded the tunnels. After 17 days underground, the last of the boys were rescued Tuesday, and are now resting in hospital. 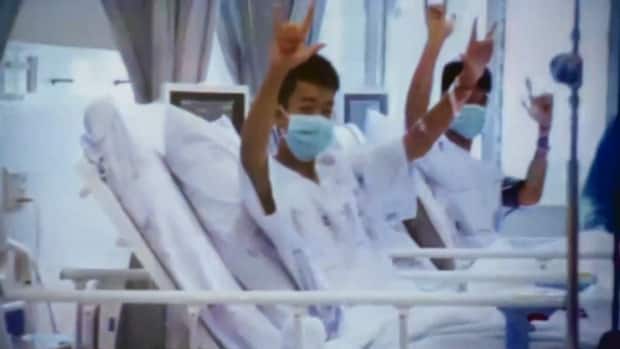 2 years agoVideo
1:12
Boys shown in quarantine, but all in good spirits as families look on 1:12

After the Chilean miners were winched to the surface one by one, they emerged into the glare of the world's media.

Franklin interviewed many of the miners, along with rescuers and psychologists, for his book 33 Men: Inside the Miraculous Survival and Dramatic Rescue of the Chilean Miners.

The aftermath of their rescue could offer valuable lessons for those trying to rehabilitate the soccer team.

Franklin warned that the media spotlight could have adverse effects.

"Hyping up their special nature, hyping up that they're heroes — I think it's only going to make the fall more precipitous once that spotlight goes away," he said.

'You're not the same person'

After being in the media's spotlight for months, the world moved on, and the miners were forgotten, said Franklin.

Readjusting back to a normal sort of life proved very difficult. He remembers one of the miners saying that when he looked in the mirror, he felt that "those eyes are no longer my eyes." 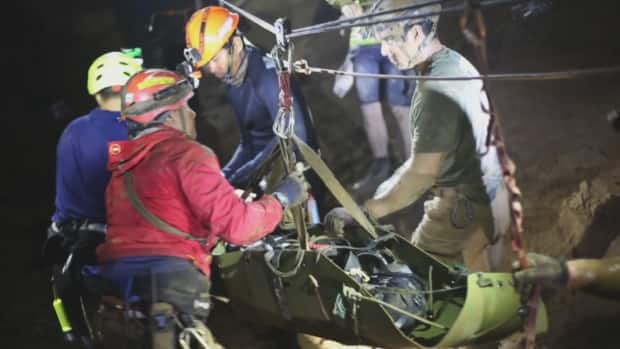 "It's not just about being tough and resilient and getting over it.... It's about accepting this kind of new being. And that's extremely hard to do even with great psychological help."

The miners were invited on trips to Disneyland and Greece. Similarly, the Wild Boars have so far been invited to the World Cup final and a soccer match at Manchester United's Old Trafford stadium in Britain.

<a href="https://twitter.com/hashtag/MUFC?src=hash&amp;ref_src=twsrc%5Etfw">#MUFC</a> is relieved to learn that the 12 footballers and their coach trapped in a cave in Thailand are now safe. Our thoughts and prayers are with those affected.<br><br>We would love to welcome the team from Wild Boars Football Club and their rescuers to Old Trafford this coming season. <a href="https://t.co/5CGMoD1Msq">pic.twitter.com/5CGMoD1Msq</a>

But big gestures like that, while well-intentioned, can be dangerous, Franklin warned.

As has been observed in the Thai case, being in a group helped the Chilean miners survive underground. But that group unity fractured in the aftermath, he said.

"The media both unified the sense of a team, but it also created all sorts of economic opportunities that some grabbed and some didn't," he said, including his own book in those incentives.

"There were all sorts of pressures; some people get invited to do the big speech with the president; some don't."

What they really needed in that time, he said, was group therapy. He would advocate the same for the recovering young soccer players.

"I remember reading that the British Navy used to send their soldiers back from combat on deliberately slow boats so they could kind of decant, and the soldiers could talk about the horrific things they'd seen, they'd done and have a few weeks ... to cry and share stories."

The boys, he said, should go to the beach with some psychologists, and just "go slow."

Listen to the full discussion near the top of this post.

This segment was produced by The Current's Idella Sturino, Richard Raycraft, Kristian Jebsen.