Engineers warn that Mosul Dam, at risk of collapse, could threaten more lives than ISIS

Has this crisis slipped by a press too distracted by the sensationalism of the war on terror? 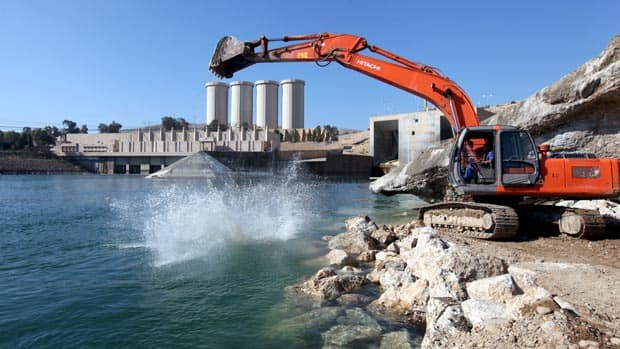 5 years ago
2:17
There are signs that the dam could burst at any time, threatening the lives of hundreds of thousands living along the Tigris River 2:17

ISIS isn't the only crisis threatening the people of Mosul.

There is a dam upstream of the Iraqi city — built more than 30 years ago on unstable ground and dubbed the "Saddam Dam" — at risk of collapse. The U.S. Army Corps of Engineers calls it the most dangerous dam in the world.

Dr. Azzam Alwash is an Iraqi-American hydraulic engineer who has served as an advisor on the Mosul Dam, which is 3.5 kilometres long and holds back an artificial lake consisting of as much as 11 billion cubic metres of water.

"If the foundations of this dam get weak, cracks will begin to happen and as soon as water starts moving, nothing stops it," says Dr. Alwash.

Alwash warns that flooding would be catastrophic for millions of Iraqis living along the Tigris River. The worst-case scenario would be almost apocalyptic: an inland tsunami would submerge every house in Mosul, Iraq's second largest city.

But he says it wouldn't stop there. Within days, the six-kilometre wide wall of water would reach Baghdad.

Every house, every street will be under water, and then the chaos and mayhem will start. The dead people are dead. You have six, seven million people homeless. They don't have electricity. They don't have food. They don't have potable water. Think of the chaos. The humanity of it. It's unparalleled.- Dr.  Azzam   Alwash

And the threat looms at a time that Iraqi forces are locked in a fierce battle with ISIS for control of Mosul.

Nadhir Al-Ansari, an Iraqi-born professor of civil, environmental and natural resources engineering at Lulea University of Technology in Sweden, says the problems with the dam have been looming for decades.

Maintenance all but stopped when ISIS took control of the dam several years ago.

"They destroyed the machinery. All the engineers and workers … they run away," Al-Ansari explains.

He says the dam was built on an unstable rock bed, so an intricate and ongoing program of grouting has been essential to strengthen and solidify the eroding rock underneath.The grouting was not a hugely effective stabilization system, but it stopped completely when ISIS had control.

Iraqi forces recently retook the dam, but the risk of collapse hasn't subsided completely. Al-Ansari says the spring thaw is an annual menace.

"[During] the flood season of the Tigris you have very high floods, and this usually takes place during the period of April to June. And if that flood comes in such high quantities, the dam will not hold," Al-Ansari says.

He did add that Iraqi officials have dropped the water levels behind the dam significantly to lessen the potential impact if it ever breaks.

Peter Hahn, a professor of history specializing in U.S. foreign policy in the Middle East at Ohio State University, says the dam was a vanity project for Saddam Hussein when it was built in 1980s.

Hahn thinks it was clear from the very beginning that the site they chose was problematic.

"It was built there for political reasons," he says. "There is some evidence that one of Saddam's generals wanted to pork barrel by building it at that site so that he could take care of the people in that part of the country."

This segment was produced by The Current's Karin Marley, Idella Sturino, and Samira Mohyeddin.