Critics say with President Donald Trump’s policy changes, the U.S. can no longer be assumed a safe place for refugees.

"Give me your tired, your poor, your huddled masses, yearning to breathe free ... "

Those words are inscribed on the base of the Statue of Liberty, but since the election last fall of a president who vows to build a wall, there's been a growing unease among asylum seekers in the U.S.

In recent weeks, some asylum seekers have started crossing a different border, walking into Canada.

Refugees have journeyed through frozen fields and abandoned border crossings in northern Minnesota to sneak in just outside the border town of Emerson, Man.

It's a perilous journey, especially in the dead of winter, and some of the border jumpers are paying a heavy price. 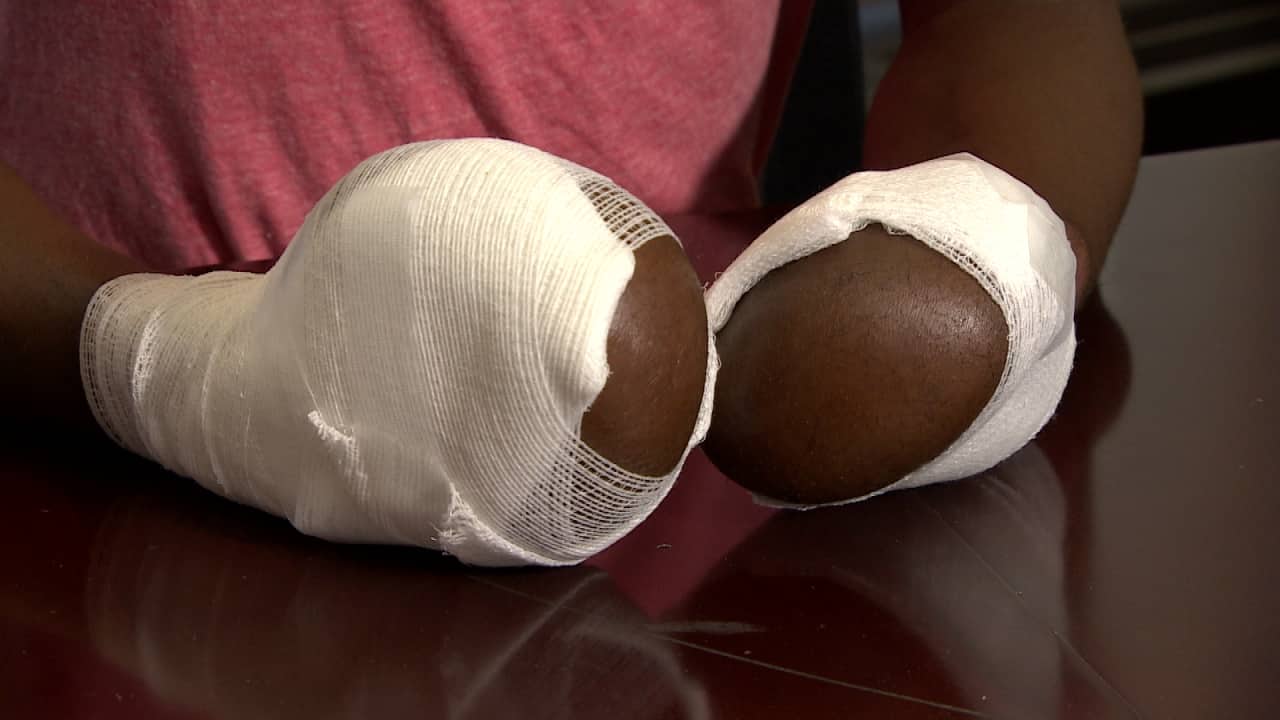 Frostbitten refugees on road to recovery

4 years agoVideo
2:01
Two refugees from Ghana who walked into Canada during dangerous cold in December say it was worth the risk. 2:01

On Christmas eve, two Ghanaian refugees crossed the border into Manitoba from North Dakota on foot, losing nearly all their fingers to frost bite as a result.

Bashir Khan said the Ghanaian's efforts are not unique. The Winnipeg-based immigration lawyer represents 17 clients who have made similar crossings into Canada.

"It's the desperation," Khan told The Current's guest host Laura Lynch about what is driving people to make the dangerous crossings.

They are going to be deported from the United States back to their home countries in Africa, and they have a very bad fate waiting for them.- Bashir  Khan

Khan explains that asylum seekers coming from the U.S. will be turned back at formal border crossings because of Ottawa's Safe Three Country agreement with Washington that requires refugees to make asylum claims in the first possible country they reach. If they've already made it to the U.S., that's where they are supposed to make their claim.

But critics say the agreement was signed under the assumption both Canada and the U.S. were safe havens for refugees, and with U.S. President Donald Trump's recent policy changes, that can no longer be assumed.

Deborah Anker, a Harvard law professor who just completed a new report assessing the impact of Trump's executive orders on immigration, says the U.S. is not safe for asylum seekers because of mass detentions, arbitrary arrests, and expanded expedited removals.

"I think it's really critical that Canada either suspend the agreement or abandon it altogether at this point," Anker tells Lynch.

Others warn that suspending or ending the agreement would have far-reaching consequences.

Julie Taub is an immigration and refugee lawyer and a former member of the Immigration and Refugee Board of Canada. She says pulling out of the agreement would likely antagonize the Trump White House, which could hurt Canada's interests in the NAFTA renegotiations the U.S. President has promised.

Plus, there's the impact it would have on the 11 million undocumented workers currently in the United States.

"Without this Safe Third Country agreement in place, potentially several million of these illegal immigrants could come to the Canadian border legally and make a refugee claim," Taub told Lynch.

But Bashir Khan points out that the Safe Third Country Agreement has only been in place since December, 2004.

Before that, asylum seekers could make refugee claims at a U.S Canadian border crossing, yet Canada did not face millions of claims.

This segment was produced by The Current's Ines Colabrese, Shannon Higgins and Sujata Berry.