While one political commentator argues that a crisis in the Conservative party can only help the party's rivals, an Independent MLA says the party must listen to its membership.

A veteran politician argues that Maxime Bernier's dramatic break from the Conservatives will help one party in particular — the Liberals.

"There's an impact because another choice is offered at election time," said Stockwell Day, a former leader of the Canadian Alliance who has held senior cabinet posts under Stephen Harper.

After several clashes with party leader Andrew Scheer, Bernier announced Thursday that he would leave the Conservatives to form his own party. He said that Scheer was too consumed with focus groups, and the party was "too intellectually and morally corrupt to be reformed." 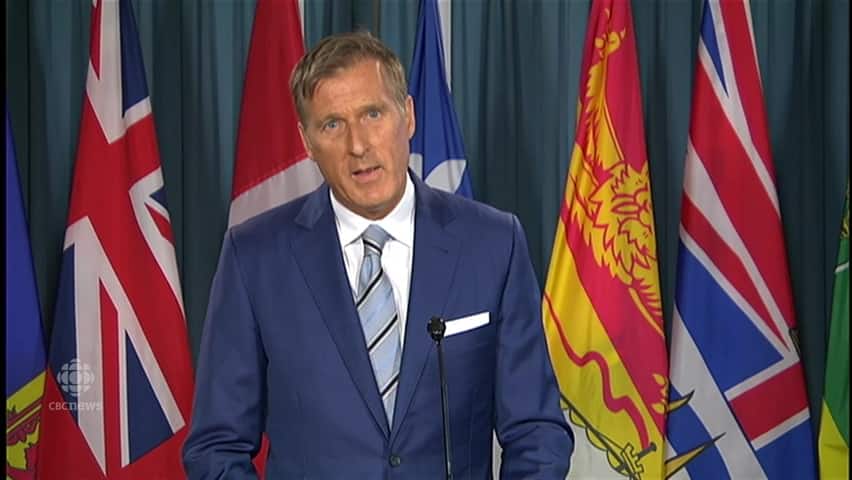 2 years agoVideo
1:17
Former Conservative MP Maxime Bernier explains why he had to leave his "intellectually and morally corrupt" party to strike out in his own. 1:17

"The problem is you don't need half [to leave with him] to see the continuation of the Liberal regime," he added. "In many ridings you only need a few percentages."

"Justin Trudeau won the election in 2015 with about 39 per cent of the vote," Day said. "You get now to a place where your opposition ... is running at about the same. Polling numbers are good, their fundraising is extremely high, and I believe this convention was the highest number of turnout in the history of the party."

"But if you split that, then Mr. Trudeau's position will be solidified."

Steven Fletcher, who served in Harper's cabinet and is now an Independent MLA in Manitoba, says that Bernier could still attract significant support.

"Half the membership will support Maxime on principle, and the other half will go with Andrew, and then that's going to be a problem."

Scheer has to take responsibility and listen to the membership of the party, he added.

Fletcher hoped to win back his federal seat in 2019, but his candidacy was rejected by the party in June.

"Andrew has blocked me from running for the Conservative Party nomination in the riding, and that undermines the membership.

"There are cases across the country where the membership is completely ignored," he said. "Candidates are not allowed to run in seats — they're barred. They're closed nominations, candidates are being parachuted in."

"What's the point of joining a party if you're not going to respect the members of that party?"