Many gay men in Chechnya are attempting to flee the region — and many are calling on Canada, and other countries, to help resettle them.

Being gay in the war-torn, Russian republic of Chechnya has long been taboo.

But in recent weeks, authorities have been on the attack tracking down gay men and imprisoning and torturing them, according to reports.

The leader of Chechnya, Ramzan Kadyrov, has dismissed this news as what he describes as "provocative reports."

As gay men in Chechnya attempt to flee the region, there are calls for Canada and other countries to help resettle them immediately.

Kimahli Powell, executive director of The Rainbow Railroad — a group that has helped persecuted LGBTQ community members around the globe get to safety — says he's mortified and concerned for individuals.

"We do this work every day. We get requests for help from people all over the world. And so as soon as the news broke and we heard the reports, we just tried to get as much information as we could, ver quickly to try to help," Powell tells The Current's Anna Maria Tremonti.

Powell's Toronto-based group reached out to The Russian LGBT Network, the point organization that is "doing some heroic work, setting up a hotline reaching out to individuals."

"They have established a safe house where they have housed people who have escaped Chechnya in Russia."

However a safe haven for individuals under threat doesn't eliminate the need for assistance. Powell points out that last year, The Rainbow Railroad received 700 requests from people in need of safety.

"It is really heartening that the Chechnya situation has put a spotlight on this issue. But there are many, many people who face persecution," Powell tells Tremonti.

He is hopeful Canada will be in a position to help facilitate emergency travel from people in Chechnya but expects more action from the government.

"Canada has a really clear opportunity to take a leadership role in helping bring people into the country. There are 30 people who are ready to travel. Many of them would like to come to Canada. And so we're just waiting to see what the Canadian government will do." 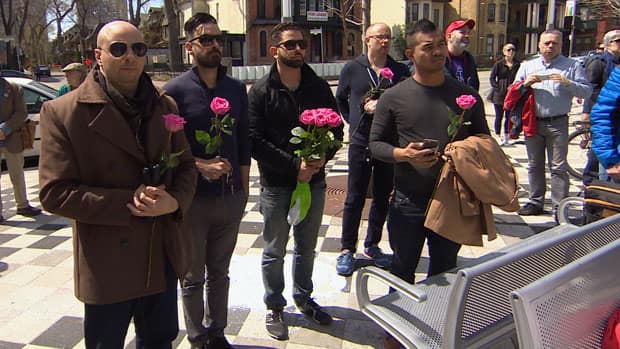 Sunday Scrum: Calls for Canada to act on Chechnya

4 years agoVideo
8:54
LGBT support groups are calling for the Canadian government to do more to help gay and bisexual people in Chechnya 8:54

The Current requested an interview with Canada's immigration minister, Ahmed Hussen. He was not available and so far his department has refused to comment on what, if anything, it might do.

Toronto Immigration lawyer Lorne Waldman tells Tremonti that in a case of the 30 identified individuals, the immigration minister has the power to issue ministerial permits that would allow them to travel immediately to Canada.

"They have done this in the past in case of people who are in imminent danger. And so there is a policy that allows them to do it," Waldman explains.

This is a no-brainer.-  Conservative MP Michelle Rempel

Having said that, Waldman says it's necessary to develop policy to deal with urgent cases because right now this doesn't exist.

"We need to have criteria as to when we would intervene in these types of situations."

Conservative MP for Calgary, Nose Hill and immigration critic, Michelle Rempel feels the lack of action from the minister of Immigration on this issue is regrettable.

"This is a no-brainer. You know when we talk about never again — this is a never again situation," Rempel says.

"I really don't want to make this a partisan issue because I think that the government has all of the tools at its disposal."

Rempel sees this case as a matter of putting political pressure on the government to use this legislative tool.

"If the community doesn't get excited about this, and doesn't put pressure on the government, I don't think that they will. But there's no reason why we shouldn't."

Listen to the full story at the top of this web post.

This segment was produced by The Current's Idella Sturino and John Chipman.